MATCHWINNER James Forrest insisted Celtic “put in a good performance” as they struggled to overcome Championship side Dunfermline in the League Cup at Parkhead yesterday.

The Hoops looked as though they were suffering a massive Champions League hangover following Tuesday’s shocker against Cluj.

It took until six minutes from the end of extra-time before the Scotland international winger claimed the goal that earned a 2-1 triumph over the gallant Fifers, as reported in CQN’s match summary.

The dreaded penalty-kick shoot-out loomed before the substitute struck to put the holders, looking for their fourth successive victory in the competition, sealed their place in the quarter-final draw.

It was more perspiration than inspiration from Neil Lennon’s side as they toiled to finally see off the East End Park outfit in an encounter that was hugely frustrating for the watching audience.

Forrest, speaking to the club website, said: “We put in a good performance. We wanted to have created more chances and scored more goals than we did. But, again, Dunfermline played very well and that’s full credit to them. 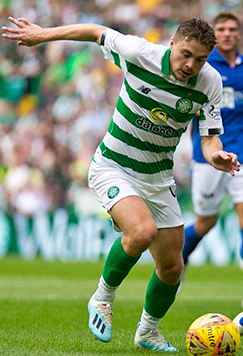 “We’re delighted to get through to the next round and that’s the most important thing.

“It took us to the second-half before we got into the game properly and, while we didn’t want to take the game to extra time, that can sometimes happen in Cup-ties. We set out to win and we’re delighted to have done that.”

Mikey Johnston had given the champions the advantage with an effort that baffled Fife’s heroic keeper Ryan Scully, but that was wiped out when Tom Beadling thumped in the equaliser to send the travelling support into ecstasy.

As the game ticked down, there was the terrifying prospect of a spot-kick decider which had seen Dunfermline manager Stevie Crawford win a League Cup against Celtic in 1994 when he played for Raith Rovers against Tommy Burns’ side and it was settled when Paul McStay missed following a 2-2 draw at Ibrox.

The Fife gaffer might have thought history was about to repeat itself until Forrest struck in 114 minutes.

The big-game player added: “As players, we don’t really think about penalty-kicks on the pitch. The coaches might, but, in fact, they tell us after 90 minutes that we have another half-an-hour to win it – and that’s what we did.

“Off the back of the disappointment of the game in midweek, to score is a big achievement for me. It was an important goal and now we look forward to Thursday.”

Forrest and his team-mates will play in their FOURTH different competition in as many games when AIK Stockholm arrive at Parkhead.

After beating Motherwell 5-2 in the Premiership, losing 4-3 to Cluj in the Champions League and beating Dunfermline in the League Cup yesterday, it is now onto the Europa League qualifiers.