IT’S not easy to keep jaunty Jeremie Frimpong out of the headlines.

He won his first-ever medal in last week’s Betfred League Cup success and was red-carded three minutes after Christopher Jullien scored the only goal of the Hampden encounter on the hour mark.

The Amsterdam-born right-back celebrated his 19th birthday on Tuesday and was the player who pointed the champions back to the pinnacle of the Premiership this afternoon with victory over Hibs at Parkhead. 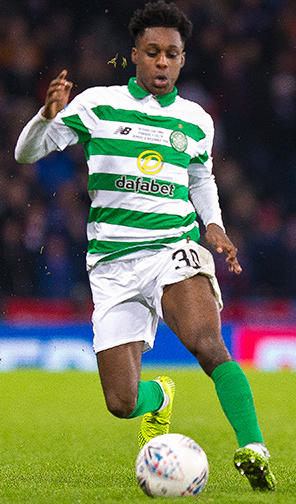 LITTLE WONDER…Jeremie Frimpong was on target to open the scoring.

Frimpong struck in the 38th minute after Odsonne Edouard had robbed Ryan Porteous of possession to set up the talented teenager. The adventurous full-back, practically playing as an outside-right, raced onto the pass and lashed a low drive under keeper Ofir Marciano for a composed and deadly finish.

It was all the Dutch ace deserved after starting the game on the front foot and continually racing at Hibs’ overworked left flank.

And it was the French talisman who made certain Neil Lennon’s men would remain in pole position two points ahead of Steven Gerrard’s Ibrox outfit who had beaten Motherwell 2-0 at Fir Park earlier in the day where Alfredo Morelos was sent off. Edouard netted the clincher in the 66th minute to make certain there were no banana skins in the title race.

In the 16th minute, the Hoops came so close to the breakthrough after some deft work from Callum McGregor on the right. He whipped over a ball for Olivier Ntcham who zipped a shot goalwards from 16 yards. Marciano, though, was well placed to make an excellent save.

James Forrest then headed wide, but the Edinburgh outfit retaliated with a curling shot from Martin Boyle which swept just wide of Fraser Forster’s upright.

Kristoffer Ajer had to look lively, too, with a well-timed challenge on Jason Naismith after a neat pass from Stevie Mallan.

Then Frimpong, who was giving Porteous a torrid time, set up Edouard, but he sent his parting shot just wide with Marciano scrambling across his line.

In the 20th minute, McGregor fired straight at the keeper and 13 minutes later he tired his luck again, but once more was thwarted by the Israeli international shotstopper.

Hibs were living dangerously as the champions kept up the pressure and Boli Bolingoli came close with a long-range right-foot drive that sizzled wide of the post with Marciano helpless. 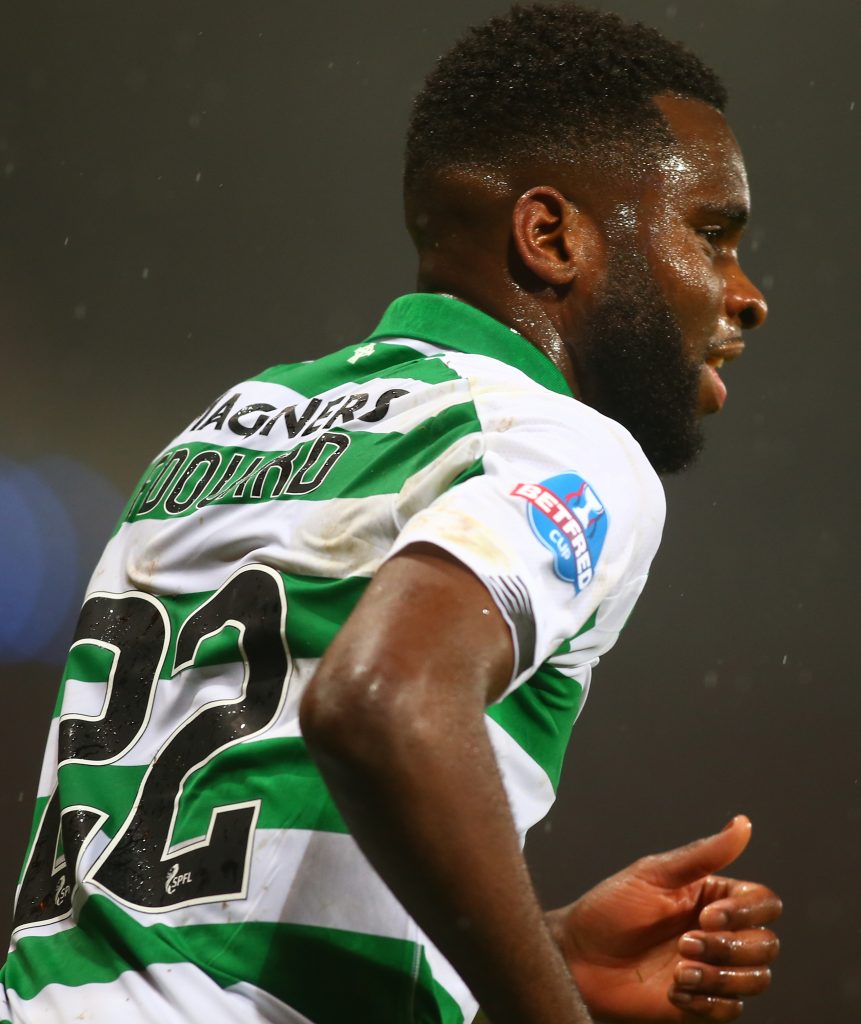 FRENCH FANCY…Odsonne Edouard made certain of the points.

A goal just had to come and it was man-of-the-moment Frimpong who applied the killer touch seven minutes from the interval.

Hibs made a change at the break with substitute goalie Chris Maxwell coming on for Marciano, who had presumably picked up a knock during a busy first-half.

The newcomer’s first task was almost to pick the ball out of the back of his net as McGregor blazed in an effort that left him helpless, but edged just past the far post.

Edouard then missed after fabulous service from Frimpong at the back post. It looked as though the French ace must score, but, amazingly, he walloped the ball high over the crossbar to the astonishment of everyone.

But he made amends in the 66th minute when he doubled the Hoops’ advantage after Ajer had picked out the scampering Forrest who neatly crossed straight to the £9million striker and this time he made no mistake as he buried the opportunity behind the helpless Maxwell.

Moments later, Edouard, starting his first game in five, came off to a well-deserved round of applause with Leigh Griffiths taking his place.

Jullien got his angles slightly mixed up late in the game when he attempted a headed clearance that brought a superb save from Forster to keep a clean sheet.

In the end, boss Lennon will be satisfied with the performance and the points. Now it’s a case of bring on Hearts at Tynecastle in midweek!