IT took Vakoun Issouf Bayo seven months to become an overnight success as he led Celtic to a well-deserved triumph over Hearts at Parkhead this afternoon.

The Ivory Coast striker made his long-awaited first start following his £2million arrival in January – and what an impact the powerful frontman made in front of an appreciative audience.

Bayo was involved in the opening goal and claimed the third as the Hoops maintained their 100 per cent record after a collection of nine points from three Premiership games and a total of FIFTEEN strikes – seven against St Johnstone, five against Motherwell and now three against the Tynecastle men.

It was the perfect platform from which to launch their Europa League bid against AIK Stockholm in Sweden on Thursday as they set out to protect their 2-0 play-off first leg lead.

Celtic Park was bathed in glorious sunshine at the kick-off as the Hoops went in search of victory after the news Steven Gerrad’s team had won 1-0 against St Mirren in Paisley earlier in the day. 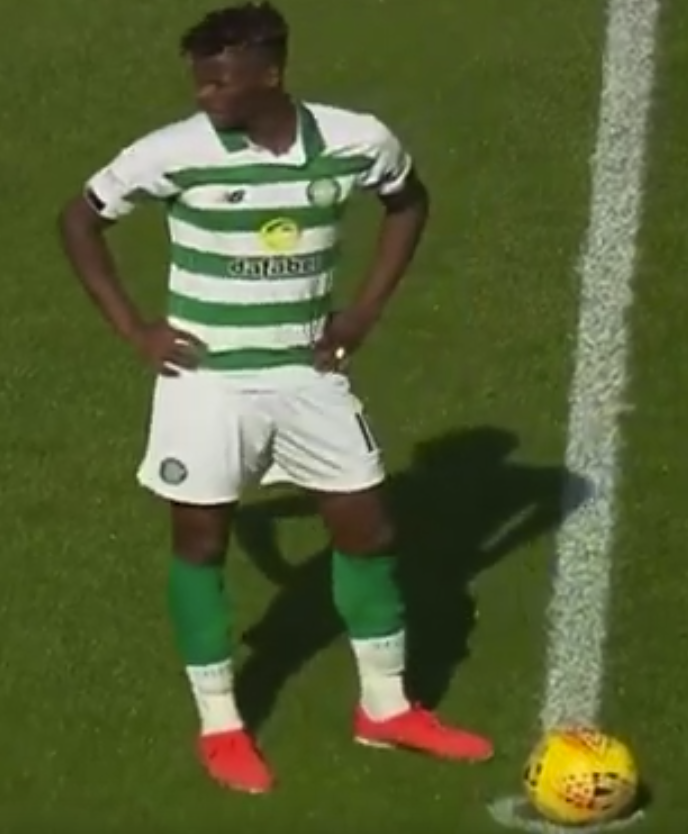 CENTRE OF ATTRACTION…Bayo prepares for kick-off.

Fraser Forster was welcomed back in goal for his first appearance in five years while Bayo took his bow following three substitute outings since his arrival at the turn of the year.

James Forrest started the game on the left with Ryan Christie deployed  on the right side of the midline.

Early on, Boli Bolingoli combined with Callum McGregor with the midfielder firing over an inviting cross, but Christophe Berra eased Bayo out of the way and the chance was lost.

Kristoffer Ajer, who played so well in the victory over AIK Stockholm on Thursday night, was in again in a right-sided defensive position. A forward surge from the towering Norwegian was halted by Jake Mulraney and referee Willie Collum was quick to award a free-kick to the Hoops.

Bayo was trying to hard to make an impression against the defensive partnership of Berra and Craig Halkett, but, at that early stage, was making little headway in a fairly scrappy opening period.

Visiting right-back Michael Smith limped off before the 20th minute with Jamie Brandon taking over.

In the 22nd minute, Halkett had to look lively to stretch to cut out an inviting low cross from Olivier Ntcham on the right with Bayo lurking behind him.

There was a flash of danger from the Ivorian when he got his head to a right-wing corner-kick, but on-loan Manchester United keeper Joel Pereira reacted superbly to touch the ball round his right-hand post.

In the 29th minute, the Hoops claimed the breakthrough goal, but there was a question mark who actually got the finishing touch.

Christie picked out Forrest on the left with an excellent diagonal cross and the winger delivered an excellent ball into the danger zone. Bayo moved in menacingly while Berra and Pereira challenged and it looked as though the ball took a slight deflection off the Hearts skipper on its way into the net. 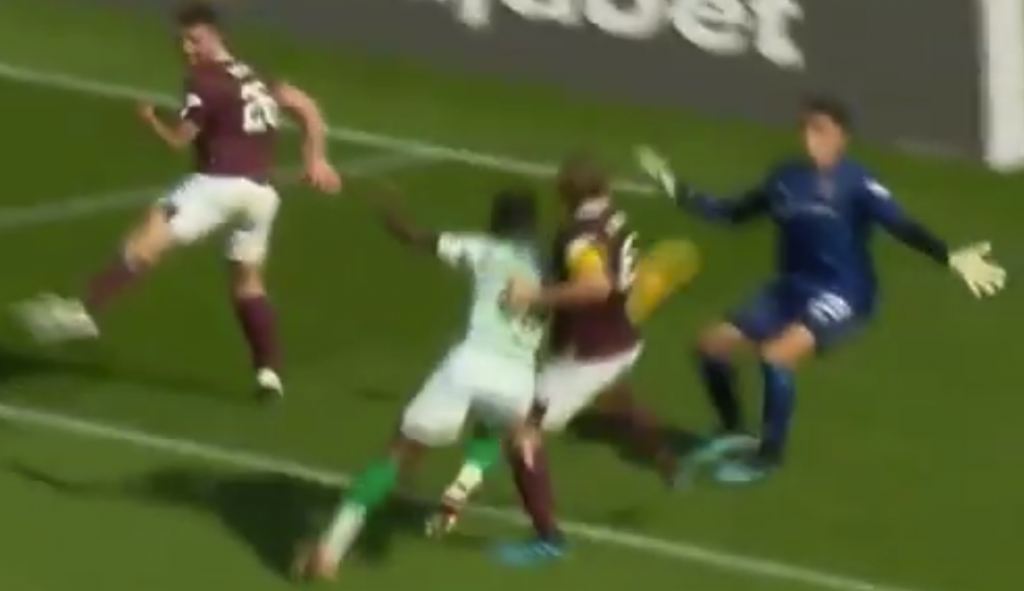 BREAKTHROUGH…new Bhoy Bayo puts pressure on the Hearts defence at the first goal.

Credit, though, must go to the all-action frontman who showed courage in throwing himself into the mix as the ball dropped in at the near post where Halkett, too, was positioned in an attempt to head clear.

Forster marked his return with a booking after Conor Washington had put pressure on Christopher Jullien and the giant Englishman had to come out and was pressurised into a foul as Luc Damour raced in.

The free-kick came to nothing, but only moments later the comeback keeper got down smartly to save a powerful 20-yarder from Aaron Hickey that zipped low on target.

Halkett joined Forster in Collum’s black book after a cynical challenge on Scott Brown in the centre circle as the Hoops skipper attempted to initiate an attack, but was sent crashing to the turf following a wayward challenge from behind.

Half-time arrived with the champions still leading by Berra’s deflection and the fans were more than interested in the performance from Bayo. There could be little doubting the commitment of the uncompromising attacker.

Neil Lennon, though, would have been more than satisfied, especially with extra firepower in the shape of Odsonne Edouard and Leigh Griffiths on the bench as back-up.

WALLOP…Callum McGregor hammers in the second.

After the interval, Forster had to look lively to clear from the inrushing Washington after a slack passback from Nir Bitton put him in a bit of bother. The shotstopper booted the ball back upfield without fuss.

In the 54th minute, a wonderful left-foot strike from Callum McGregor doubled the home side’s advantage after Forrest had robbed Damour about 40 yards out to set the move in motion. It shuttled around before Christie presented a shooting chance in front of his midfield partner.

McGregor didn’t need an invitation to put his laces through the ball and he hit it superbly and Pereira had no chance as the ball thundered beyond the keeper at his left.

WELCOME BACK…Fraser Forster gets down to hold a low shot on his return.

On the hour mark, Parkhead erupted in elation when Bayo added the third goal – and this time there was no doubt about who put the ball in the Jambos net.

Ajer, again so impressive as he bombed into attack on the right, fired in a right-wing cross after receiving a ball from Bitton and Bayo was quick to get in front of the Edinburgh defenders to turn the ball wide of the helpless Pereira. It was a strike the big man well deserved.

It didn’t get any better for the visitors when in-form Mikey Johnston came on for Ntcham in the 69th minute.

Forrest left Hickey in his slipstream as he sent over another cross and Bayo thumped a header off the woodwork before making his way for Leigh Griffiths in the 78th minute. 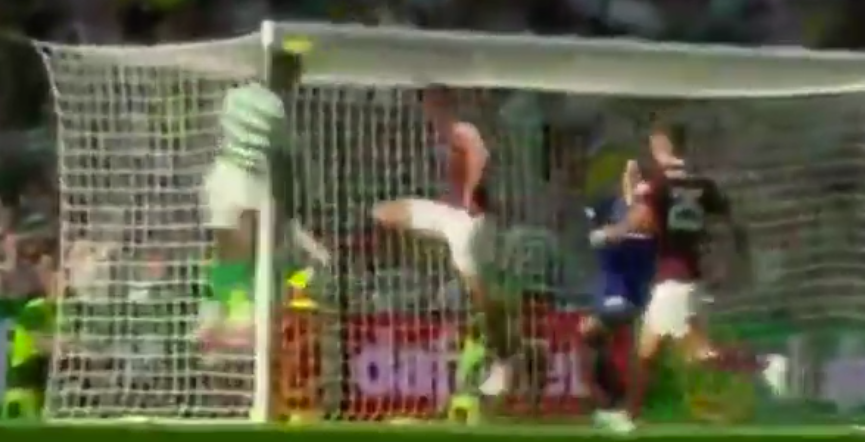 KNOCK ON WOOD…Bayo is out of luck with a header that strikes the post.

Hearts were thrown a lifeline when ref Collum awarded them a penalty-kick in the 81st minute after a foul by Brown on Sean Clare. Washington fired in the penalty-kick which was pushed away by Forster at his left. Unfortunately, the ball rebounded straight back to the Irishman who blasted it into the empty net.

Ajer went off to a standing ovation just before the end with Anthony Ralston coming on to see out the remaining moments.

Now it’s all eyes on Ibrox a week today for the High Noon showdown with the Gerrard’s outfit.

Something has got to give in Govan. The champions, going for nine in a row, will be in no mood to check their momentum.