Celtic Quick News on News Now
You are at:Home»Latest News»CELTIC IN TV SWITCH
By CQN Magazine on 29th June 2016 Latest News
CELTIC’S opening day Premiership game against Hearts at Tynecastle has been switched to Sunday, August 7.
The match will be televised live by Sky Sports and will have a 2.15pm kick-off. 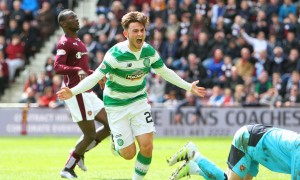 The Hoops celebrated their fifth title in succession at the Edinburgh club’s ground on April 30 last season with a 3-1 triumph following goals from Leigh Griffiths, on-loan Manchester City winger Patrick Roberts and Colin Kazim-Richards.
It was the former Feyenoord’s striker’s only league goal for the club – his other strike came in the 2-0 Scottish Cup win over East Kilbride in February – before he departed the club for Brazil at the end of the campaign.
Last season’s runners-up Aberdeen will take on St Johnstone in Perth earlier the same day with a 12.30pm start.
—————–
ONCE UPON A TIME IN THE KINGDOM OF GOVANIA
Let’s all laugh at Rangers, let’s all laugh at Sevco…the story of the two Ibrox clubs told brilliantly by CQN poster Mea Culpa and illustrated by Cartuja. This is a fantasy story book for grown-ups and is the funniest thing you will read all year!
Once Upon a Time in the KINGdom of Govania is an Escape Goat Production for Celtic Quick News and Internet Bampots.
Available to order now exclusively from www.cqnbookstore.com – copy arrive this Friday! If you’re going on holiday soon take this to read on the beach…