CARL STARFELT is one of three changes from the team that lost 1-0 at Livingston at the weekend for tonight’s Premier Sports League Cup quarter-final against Raith Rovers at Parkhead.

The Swedish international centre-back was not in the squad for the Premiership setback in West Lohian, but will line up against Cameron Carter-Vickers against the Fifers.

Anthony Ralston and Adam Montgomery, two unused substitutes against Livi, are in from the start with Josip Juranovic and Boli Bolingoli dropping onto the bench. 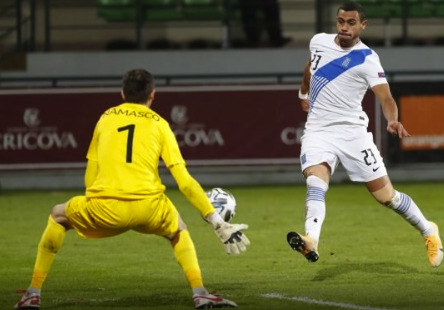 WAIT FOR IT…Giorgos Giakoumakis shows his goal threat for a former club – his debut for the Hoops is getting close.

Hoops fans may also get an opportunity to see £2.5million Greek striker Giorgos Giakoumakis who has yet to make his debut following his deadline-day arrival from Dutch outfit VVV-Venlos.

The frontman who scored 26 goals in the Eredivisie last season is also named on the bench for the crucial encounter.

The semi-final draw will be made after the game.