The transcript for the HMRC v Rangers First Tier Tribunal (FTT) runs to 1126 pages. It will take weeks, perhaps months, to distil the content into what remains relevant to the SFA’s decision to reject the SPFL’s request to review issues surrounding Rangers EBTs. For today:

On 18 April 2011, Mr Thomson asked Mr Dickson why a Trust schedule was not lodged with the football authorities, Mr Dickson replied:

It should not “Not necessarily” have been lodged.

When asked by Mr Thomson “What possibly basis do you have for saying that it should not have been lodged?”

Mr Dickson replied, “The SPL didn’t – never contacted us coming looking for it”.

After failing to convince Mr Thomson that lodging the schedule late rendered there no point to lodging it at all, Mr Thomson puts him on the spot:

“I’m asking you about the fact that it should have been lodged. It’s supposed to be lodged early. Just because you don’t lodge it timeously, doesn’t mean to say that you’re not then under an obligation to lodge it, Mr Dickson.”

To this, Mr Dickson concedes:

“Okay, it should have been lodged with the SPL then.” 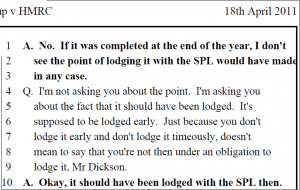 A current SFA Council member, in a court of law, accepted that Oldco Rangers did not lodge paperwork to the SPL relating to EBT payments, which he accepted should have been lodged.

Mr Dickson’s SFA colleagues decided to reject the SPFL’s request for a review into the matter. You can draw your own conclusions as to why.