And the Hoops’ seventh-highest scorer in history with 189 goals is also excited at the new faces the manager has been gathering since his arrival as Neil Lennon’s long-term successor six months ago.

Hughes, now 78, a favourite of the fans during his heyday in the sixties, has opened up in interviews with author Alex Gordon for a series of hard-hitting CQN EXCLUSIVES in which he has delivered his forthright views of the new-look Celts.

Big Yogi said: “I like the fact that Ange has refused to compromise his principles. His ideology could have folded after the 4-0 hiding from Bayer Leverkusen at Parkhead at the end of September. 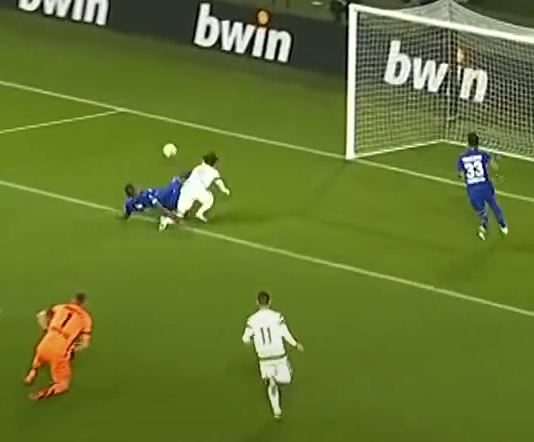 OUT OF LUCK: PART ONE…Kyogo Furuhashi sees a Bayer Leverkusen defender scramble the ball clear after he had swept past the keeper. 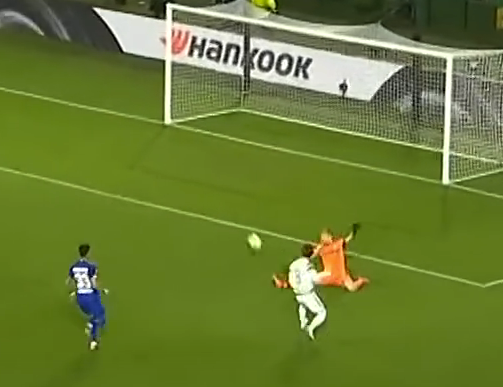 OUT OF LUCK: PART TWO…Kyogo sees the outstretched leg of the keeper divert the ball off target.

OUT OF LUCK: PART THREE…Kyogo fires a shot past two Bayer defenders only to see the keeper pull off a flying save to deny him again.

“Let’s face it, that is a horrendous scoreline, especially in the east end of Glasgow in front of a partisan sell-out crowd.

“That result would have been viewed throughout Europe and clearly would not have done the new manager and the team any good whatsoever.

“However, the scoreline did not tell the story of that particular 90 minutes. It was never a four-goal winning margin. For a start, Kyogo Furuhasdhi could have had a hat-trick with a little rub of the green.

“At 0-0, he was through on a very competent keeper and you would have expected a chipped finish would have done the job. 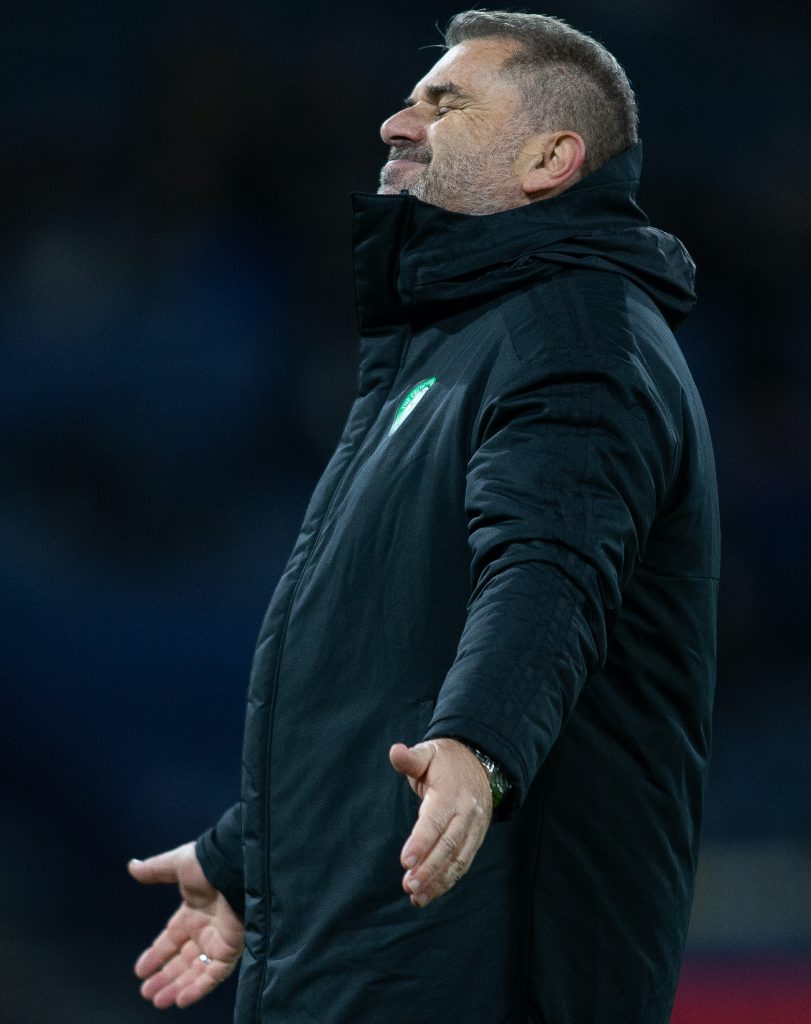 TRIALS AND TRIBULATIONS…Ange Postecoglou on the touchline.

“Unfortunately, the Japanese frontman was playing his first game after missing five and he wasn’t as sharp as may have been anticipated. He did dink the ball goalwards, but an alert defender got back to hoof it to safety.

“So, a goal at that stage would have changed the entire dynamic of the match. Who knows how the Bundesliga team would have reacted to the loss of an early goal.

“Or, for that matter, how the Celtic players would have been boosted by a barrier-breaking strike.

“While a lot of folk looked at the result and moaned and groaned, Big Ange held his nerve and refused to be compromised. I can only commend him for that.”

Hughes, who won 15 honours at Celtic after making his breakthrough as a 17 year old rookie, continued: “It says a lot for the manager’s self-belief and confidence that he did not waver from the task he had accepted back in June.

“A revamp was urgently required following a dire previous campaign which saw my old club fail to win silverware for the first time in 11 years.

“The Greek-Australian went on record before the first ball was kicked to insist every player would start with a clean slate.

GREEK TRAGEDY…Vasilis Barkas has a howler to allow FC Midtjylland to equalise in Glasgow in July.

“That must have been music to the ears of Vasilis Barkas who had failed to convince following his £4.5million arrival from AEK Athens the previous summer. The keeper was roundly criticised for his inability to keep the ball out of the back of his net.

“True to his word, though, Big Ange fielded him in the opening game of the season, the Champions League qualifier against FC Midtjylland, at Parkhead in July.

“With the team leading through a debut goal by new Bhoy Liel Abada, the Greek goalie had a howler as he allowed the Danes to equalise. It was an awful attempt to save a simple free-kick that sailed over his head into the net.

“We haven’t seen Barkas in competitive action since and it appears he has no future in Glasgow. He was given a chance to impress the incoming gaffer and blew it big-style. 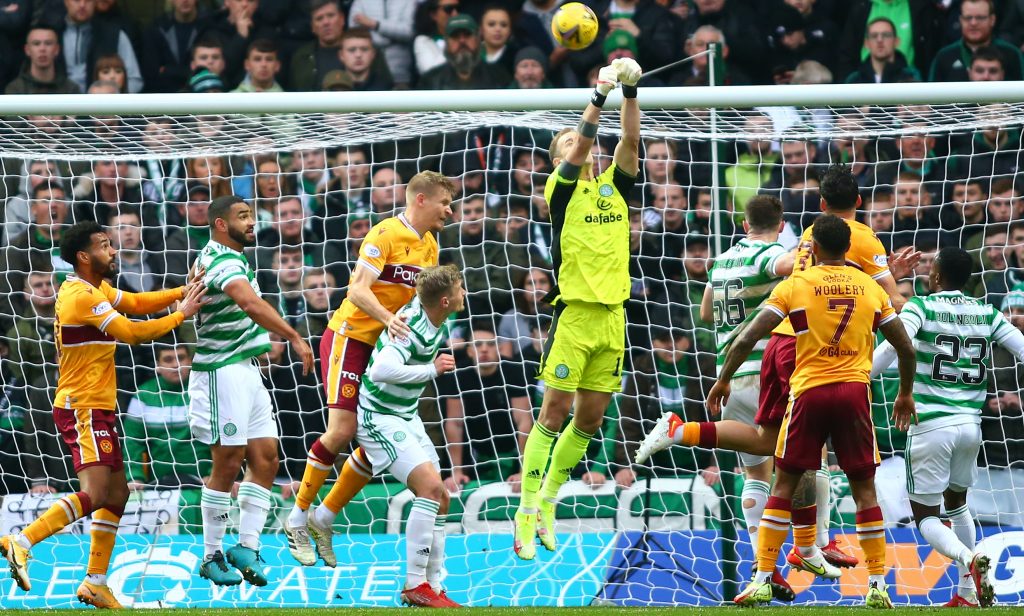 FIST IN TIME…Joe Hart punches away a high ball in the 2-0 win over Motherwell at Fir Park in October.

“He is now behind Joe Hart, Scott Bain and Conor Hazard in the pecking order and a move next month is the only answer if he wants to revive his career.

“The decision to axe the keeper wouldn’t have been an easy one for Postecoglou, but the fact he moved so swiftly for a replacement in Hart, who already looks a bargain at £1million from Spurs, proves he will not stand on ceremony. Big Ange will make the hard choices for the good of Celtic.”

Hughes added: “Last week’s 3-2 win over Real Betis proved the boss is on the right lines.

“He made wholesale changes and, as I stated in CQN during the week, the shake-up showed there is good, emerging talent at the club. 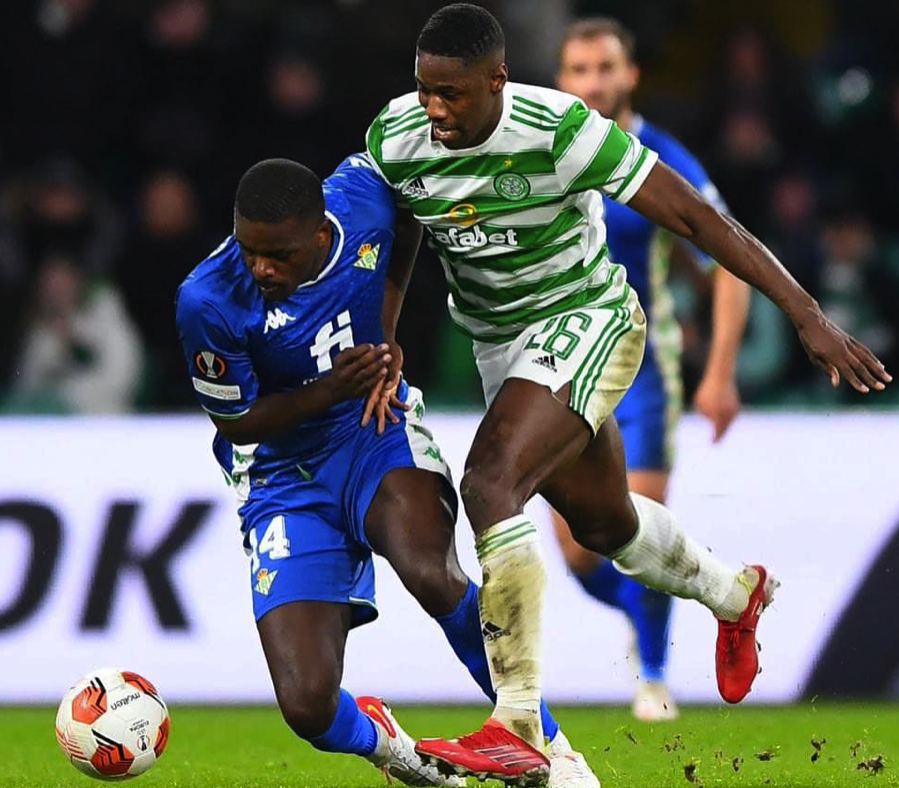 “For many, including me, it was their first look at Osaze Urhoghide and Liam Shaw, the two lads who arrived from Sheffield Wednesday in the summer when their contracts expired at the Yorkshire outfit.

“I liked the look of both. Urhoghide, playing at right-back, is a bit raw at this level, which is to be expected, but he showed good energy, the ability to get in a telling tackle and was quick to join the attack when there was an opening.

“Shaw was competitive in the middle of the park and worked hard defending and going forward. He tired and was taken off to be replaced by David Turnbull in the 65th minute, but, unlike the unfortunate Barkas, I reckon the youngsters did enough to impress the manager.

“The team is gelling and has not been helped by injuries to the likes of Kyogo Furuhashi, Filipe Jota, Anthony Ralston, Carl Starfelt and Greg Taylor since the start of a crucial season.

“The high intensity Postecoglou demands of his players will bring problems with levels of fitness until everything settles down.

“That’s when we will view the REAL Celtic under the guidance of Big Ange and that is certainly an exciting prospect for any Celtic fan. 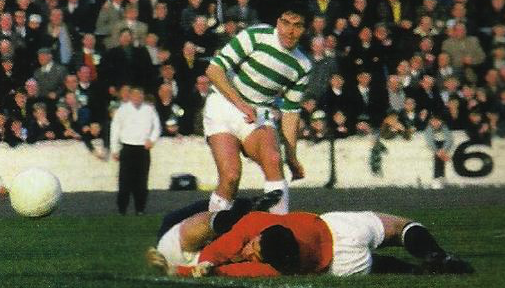 “And, of course, there is an intriguing transfer window about to open and I don’t think for a heartbeat the boss will miss the opportunity to further strengthen his squad.

“These are exciting times for Celtic. The foundation is being put together on a match-by-match basis plus hard work in the background.

“All we need is a trophy to add a little oomph to the transformation and that could be delivered a week today when Celtic face Hibs in the Premier Sports League Cup Final at Hampden.

“I wouldn’t rule out Ange Postecoglou holding aloft that gleaming trophy at the national stadium around 5pm in seven days’ time.

“I’m sure it could be the start of something wonderful for my old club.”