Celtic Quick News on News Now
You are at:Home»Latest News»‘I FEEL LIKE A YOUNG PUP,’ SAYS BROONY, 34, AS HE PREPARES FOR TITLE No.9
By CQN Magazine on 1st August 2019 Latest News

SCOTT BROWN, 34-year-old veteran of title celebrations, is looking forward to doing it all again this time around and admitted: “I feel like a young pup.”

The Celtic captain will go into battle again when the Premiership season kicks off against St Johnstone at Parkhead on Saturday when the eighth successive championship flag is unfurled.

Brown, who was bought by Gordon Strachan for a-then record domestic transfer fee of £4.4million from Hibs in 2012, is relishing the challenges that lie in wait for the title kings with the 38-game marathon about to commence.

The former Scotland international captain, speaking to the club website, said: “I feel like a young pup. I’ve got two years left on my contract and I certainly hope to make the most of them, so long as I’ve still got that drive to do what I do.

“Saturday is going to be fantastic. It will be great for us to unveil the flag at Celtic Park again, and for the families of Billy and Stevie to come along and do that. It shows you it’s a family club and it shows you how close a bond everyone has at this club.” 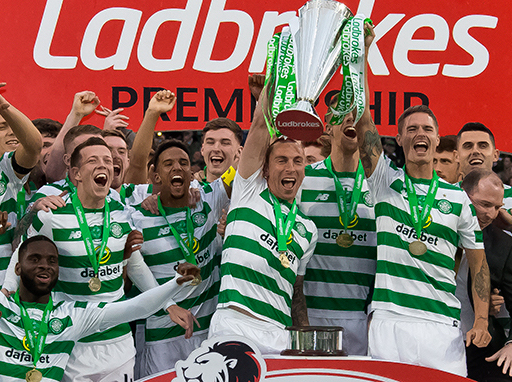 The Hoops, of course, are coming off the back of the unprecedented achievement of winning the treble treble, every one of the nine pieces of silverware on offer over three glorious year and the energetic midfielder will once again be keeping his eyes on the prize with the coveted nine-in-a-row next in line.

Brown added: “That’s our aim. We’ve managed it for the last eight seasons and it’s been fantastic, so we need to push for this season the exact same as we have been doing all the way through.

“We’ve got the players, squad and a manager who’s got the belief in us to go and do it.

“There’s always going to be a strong challenge. It’s going to be hard this season as it is every other season.

“We look forward to that challenge and the main aim for us is to start the league well and get into the group stages of the Champions League.”

A special day in Paradise on Saturday afternoon will be made even more poignant with the appearance of Liz McNeill and Sadie Chalmers, widows of the Lisbon Lions who passed away in April, as they perform the unfurling of the flag in a touching ceremony.