STEVEN GERRARD doesn’t appear to be too impressed by Celtic’s performance in the 1-0 win over his new-look Ibrox outfit at Parkhead a fortnight ago.

The Liverpool legend was making his debut in the Glasgow derby fixture up against his former Anfield gaffer Brendan Rodgers.

The champions were out of luck when FOUR efforts struck the woodwork and it took a 67th-minute goal from Olivier Ntcham to settle the issue.

Before that, however, James Forrest and Mikael Lustig had struck the crossbar in the first-half and the French midfielder had a low drive touched onto the bar before he scored.

Leigh Griffiths also knocked on wood late on after his appearance as a substitute.

But Gerrard, the fourth Rangers boss to lose to Rodgers in just over two years following Mark Warburton, Pedro Caixinha and Graeme Murty, reckons they will be more than ready when the second meeting arrives at Ibrox on December 29. 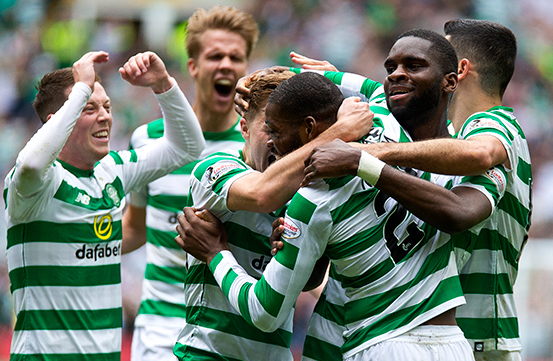 OLIVIER DE GOAL…Ntcham is congratulated by his Celtic team-mates after the winner.

Speaking of the encounter two weeks ago, the Govan gaffer said: “After analysing it, for me the game was split in two halves. We weren’t good enough in the first half, didn’t pass the ball well enough and we didn’t have enough belief and courage when we won the ball back.

“Our shape wasn’t too bad. It was slightly too deep for my liking, but they gave us the ball back enough times for us to go and play and show what we were about and we didn’t do that for 45 minutes.

“We gave Celtic the ball back again and they came and created the best chances in the opening period.

“I was pleased we came out in the second-half and gave a better account of ourselves in terms of making the game a contest and showing what we were about and it was even-stevens. Next time it comes around, we’ll have been together a lot longer and we’ll be a better team.

“We know what Celtic are about. Brendan said they were excellent on the day. Celtic players seemed as if they were really happy about how they played.

“If that’s Celtic’s best, I am satisfied with how it looked second-half. However, there is certainly a lot for us to work on before getting ready for the next fixture.” 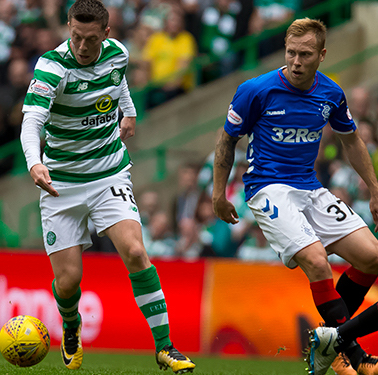 ON THE RUN…Callum McGregor races away from Scott Arfield.