KARAMOKO DEMBELE paid tribute to the clear vision of new boss Ange Postecoglou after scoring the opener in the 2-1 win over Charlton in Newport yesterday.

The 18-year-old winger was given the nod by the former Australia international manager to play from the start against the English third-tier outfit – and the exciting youngster took the opportunity to show Neil Lennon’s successor what he cam contribute in the crucial months ahead.

After 45 minutes against the London team, Dembele said: “I’m training every day just to try and show the manager what I can do. It was good to get more minutes in the legs.

“Everyone was moving well, everyone knew what to do before the game.

Dembele made only seven first-team appearances last season and scored his first goal for the club in the 4-0 victory over St Johnstone as long-time captain Scott Brown made his farewell as a Hoops player to Parkhead on May 12. 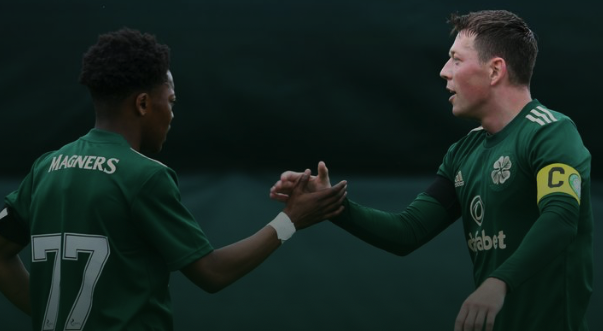 SHAKE ON IT…Karamoko Dembele is congratulated by skipper Callum McGregor after his strike against Charlton.

The youngster, speaking to Celtic TV, added: “It was obviously good to get out there, play 45 minutes and enjoy my football again. I was pleased with my performance, as well.

“It was good to score, but just enjoying football again, I think that’s the main thing, because obviously I’ve not played for a while. It was good to get out there and just have fun.

“When you’re not playing you’re obviously motivated to play, but when you are out there you just want to give it your all and show what you can do, and obviously score and just enjoy the game.”

Dembele will get another opportunity to show Postecoglou his qualities when the Hoops take on Bristol City on Wednesday before they return to Glasgow to face Preston North End at 5.30pm on Saturday when 2,000 fans will be allowed into the stadium for the first time since the 5-0 Premiership victory over St Mirren on March 7 2020 when Leigh Griffiths claimed a hat-trick.