Celtic Quick News on News Now
You are at:Home»Latest News»LENNY ‘NOT HAPPY’ AT TREATMENT OF BROONY
By CQN Magazine on 31st March 2019 Latest News

FUMING Neil Lennon has slammed Steven Gerrard’s players for their treatment of Celtic skipper Scott Brown in the champions’ 2-1 win at Parkhead this afternoon.

The Hoops midfielder was involved in a couple of extraordinary flashpoints during a fiery encounter when he was punched in the face by TWO Ibrox players.

Controversial Colombian striker Alfredo Morelos was sent off for the FIFTH time this season after thumping Brown in an off-the-ball incident in the first-half.

And Ryan Kent, who scored his side’s leveller with their only shot on target, was caught on camera delivering a left hook to the 33-year-old’s jaw following James Forrest’s winning goal.

Incredibly, the on-loan Liverpool winger escaped punishment from referee Bobby Madden or his assistant match officials, but he will most certainly cop it when the SFA panel look at dishing out a retrospective suspension. 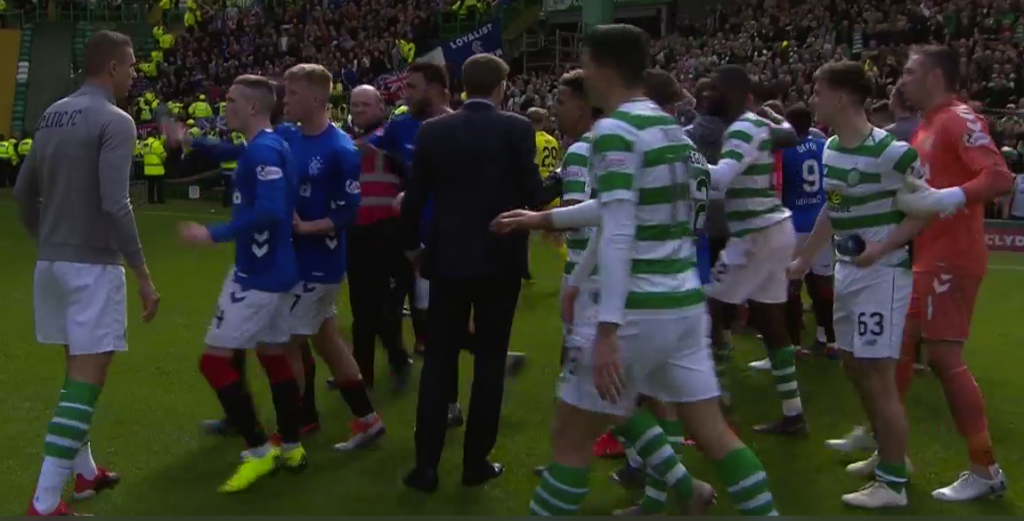 FULL-TIME FURY…players clash as they head for the tunnel after a fiery encounter.

Brown was also on the end of a furious blast from Andy Halliday which saw the Ibrox defender pick up a second yellow card after the final whistle. Technically, that is a sending-off offence

Lennon, speaking to the Daily Record, said: “I’m not happy with the treatment of Scott Brown.

“He has been elbowed and then punched in the face by another player and Rangers should have been down to nine men.

“We should be talking about a great game of football where two teams went hard at it.

“I’m sure it will all come out in the wash and I’m sorry I can’t comment on it as I was straight up the tunnel for a breather.

“I’ll digest that over the next couple of days and maybe have something for you Tuesday or Wednesday.” 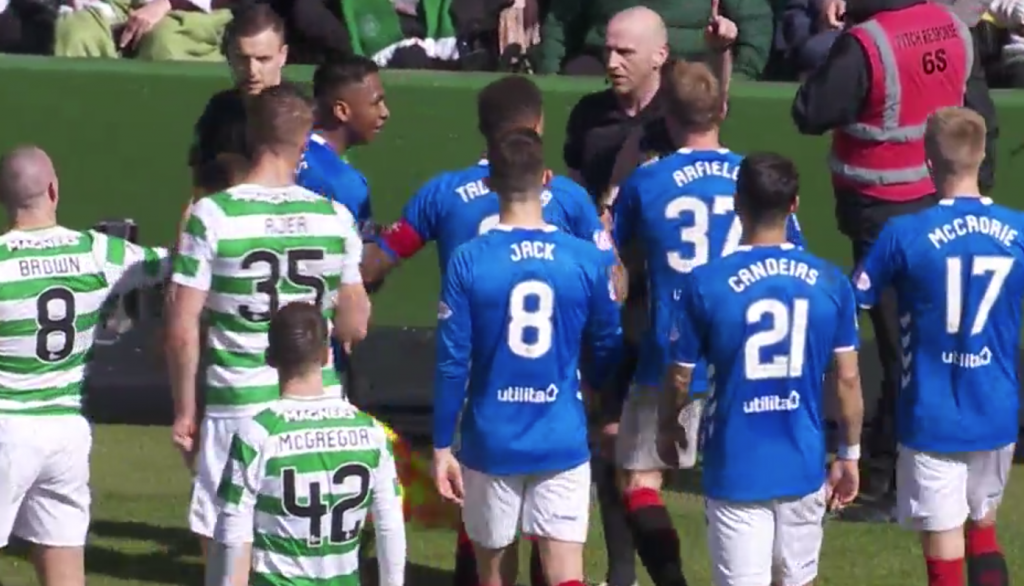 Asked if Celtic targeted Morelos deliberately knowing of the frontman’s volatile temperment, Lennon replied: “It wasn’t pre-meditated or anything like that.

“You’ll need to ask Alfredo Morelos why he keeps doing it.

“He’s a great player, but he has major discipline problems.

Quizzed if his players, now with a 13-point lead, could not throw it away with only seven games to play, the interim Hoops gaffer said: “I would like to think so.

“There was a lot of emotion and build-up to this game. These players just won’t give up at the moment and they are a credit to the club.

“Now we just give them some rest and go again on Wednesday night. 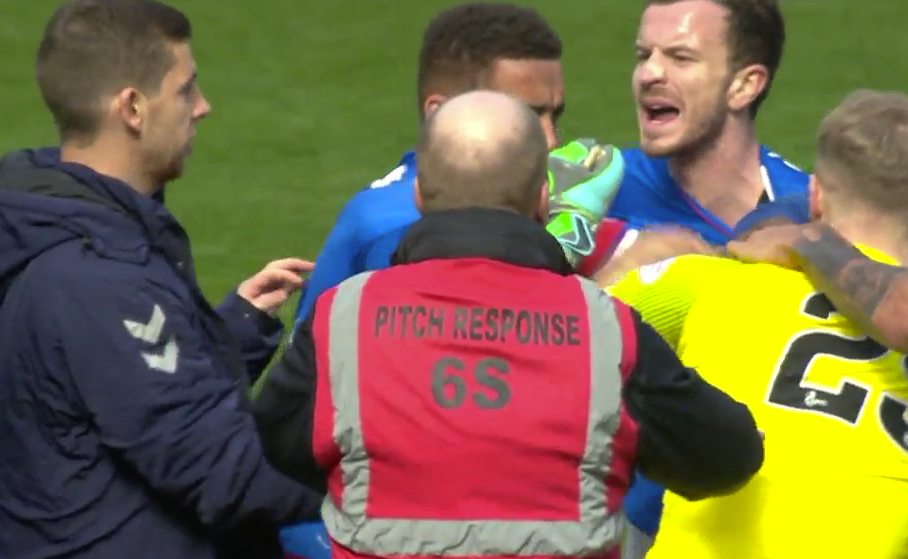 HEADING FOR TROUBLE…Ibrox defender Andy Halliday vents his feelings at the end to earn a second yellow card.

“I’m absolutely thrilled with the three points and we have extended our lead at the top.

“I can’t ask for any more than the players are giving me at the minute.

“Edouard’s performance today was different class and I thought he was the best player on the pitch by a mile.”

The Hoops now take on St Mirren in midweek in Paisley where they dropped two points earlier in the season in a goalless draw after Olivier Ntcham was red-carded after half-an-hour.

The Frenchman lasted just over an hour of his comeback game in his first appearance this year. He looked rusty before he was replaced by Tom Rogic, who, coincidentally, was playing his first game in 2019.

Like Ntcham, the Australian midfielder will need to have a couple of games before he is up to match speed.