Over the weekend there has been much talk of Mr Topping, his own stated views on the LNS decision and sanctions, and the legal advice obtained from either a mighty, but non Arbroath based, solicitor or a QC of some standing.

There is also the John James articles to consider and the “revelation” that any appeal against LNS was effectively hijacked by Neil Doncaster, Stephen Thompson of Dundee Utd and the representative of Kilmarnock Football Club who all wanted just to move on from the Rangers debacle.

I have even heard rumours that the legal advice given to the SPFL is to the effect that no action can be taken against an organisation that no longer exists.

What a lot of baloney and bogwash. The position is clear.

1. LNS was asked to consider the registration of the players’ issue and nothing else. He did so, laid out a set of facts that relied heavily on all EBT’s being legal and some, but not all, of the testimony led at the FTT.

He did not consider all of the appropriate questions and was not supplied with key elements and information. Further, he applied a test of proportionality of punishment. In the case of FC Giannina, UEFA argued that there should be no proportionality test and this argument won the day.

In the same case, the court held that when considering an application for a licence, that application must meet some minimum disclosure and financial tests. If the application does not meet those tests then the position is absolute — the club concerned cannot and must not be granted a licence and so cannot be and should not be in the competition to start with and so what is the appropriate “proportional” punishment is irrelevant.

You cannot punish a club in a competition if it should never have been in the competition in the first place.

It was presumed that RFC had, in fact, the right to be in the competition, had validly obtained a licence with no hint of fraudulent representation or misrepresentation at that key stage, and so the only issue was the proper registration of the players.

Even the decision here is flawed and I suspect that the question asked of the SPL wonder lawyer was “can this now be appealed or reviewed?”

No one is suggesting appealing disciplinary procedures that have already been determined on a narrow compass, what is being suggested is a review of all procedures and if necessary a review of how LNS was set up and whether that legal process reached a satisfactory sporting outcome?

With regard to any suggestion that no action can be taken now because some entity or another does not exist, then this is clearly nonsense.

For a start, Rangers PLC with a specific company number traded as Rangers FC with the benefit of a football licence for many years. Technically that entity does still exist but it is in liquidation and is operated by a court appointed liquidator.

However, the status of this vehicle is altogether irrelevant.

Further, at the end of the competition, the sporting body, having collated and tested the results of competition, declares someone to be the winner or champion. This is an award. It is not a negotiation, or a gift, or a bilateral agreement, but an award by a sporting body.

Again, there are numerous examples of a sporting body simply announcing that it has withdrawn that award. The IOC did not consult Ben Johnson and ask for his point of view about whether or not he should be stripped of his gold medal, they simply announced it.

Further, with all due respect to Johnson, whether he was living or dead made no difference to this announcement as was living at the time of the race.

In this instance, what is wholly ironic is that with Rangers FC had their tax scam been revealed and admitted long before it was declared unlawful by the supreme court, then RFC PLC may well have been “dead” and in liquidation long before some of the competitions in question had even been entered or ran.

The SPFL and SFA stances on this are undermined by completely flawed logic and any attempted application of the law based on flawed logic and incorrect facts will lead to a result that is no more than a “legal nonsense”.

Or in other words their thinking is a load of bull! 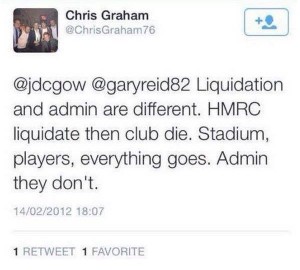