AARON MOOY will seal a dream move to Celtic today.

The Australian midfielder will join his former international manager Ange Postecoglou at the champions after being released from his contract at Shanghai Port.

The 31-year-old former Huddersfield and Brighton star, who had a two-year spell in Scotland with St Mirren after joining in 2012, and his representatives have thrashed out a contract with the Hoops which will end the interest of a host of clubs in England and Europe. 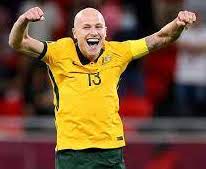 JOY BHOY MOOY…Celtic-bound Aaron Mooy looking happy during one of his 53 appearances for Australia.

The deal will be for one year with a 12-month option for the 53 times-capped star who has claimed eight goals for his country.

Postecoglou, though, will not be rushing Mooy into action as the Sidney-born playmaker, who was valued in the £13million region in 2018, has not played any club football since January 4 after cutting ties with the Chinese Super League outfit.

The news of the surprise transfer was revealed on social media by reporter Mike McGrath who tweeted: “Aaron Mooy to disappoint a host of Championship clubs to secure a dream move to Celtic as a free agent.

“Talks have progressed for the Australia midfielder to join squad of countryman Ange Postecoglou.” 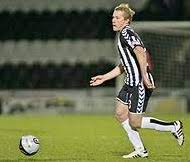 HAIR-RAISING…Aaron Mooy during his two-year playing spell at St Mirren.

Mooy, whose wife is Scottish, has been linked with a reunion with his former Socceroos gaffer Postecoglou for a lengthy period, as CQN reported over a YEAR ago.

With Australia set to play their first game of the Qatar World Cup Finals against France on November 23, a move to the champions will give the player valuable game-time at the highest level.

It will also provide Postecoglou midfield options after allowing Tom Rogic, Nir Bitton and Ismaila Soro leave since the end of last season.