SCOTT BROWN has admitted Celtic will have no excuses if they slip up against Aberdeen at Pittodrie this afternoon.

Many onlookers reckon the Hoops’ 62-hour turnaround, from the 2-1 Europa League win over Lazio in Glasgow on Thursday to the trip to the north east to take on the Dons in today’s 12.15 kick-off, is unfair.

There have been calls for the SPFL to do more to help Scotland’s Euro flag-bearers.

However, the 34-year-old champions’ captain remains defiant and insisted the Parkhead men can cope with the pressure.

Brown, speaking to the Sunday Mail, said: “We could barely be going any further away – but we need to do it. We need to go up and deal with it and make no excuses.

“The squad had a day off on Friday to rest and try to recover so that we’re fresh and ready, as domestically the Aberdeen game is huge for us. 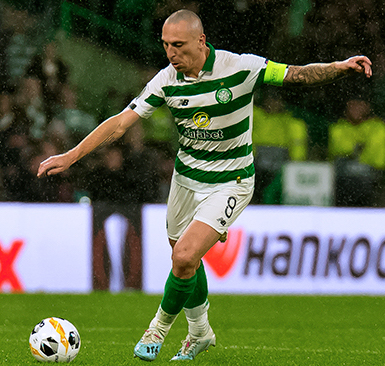 ON THE BALL…Scott Brown in control of the situation.

“It’s our bread and butter and we need to make sure we dominate the league. We need to create chances, score goals and maintain our form.

“It’s all about the pressing and energy of the lads – but we kept going against Lazio until the 94th minute and looked the fitter team.

“I don’t think there have been many times we’ve said that against top-quality opposition that we looked the fitter team.

“And we could have played an extra 10 minutes there too – the lads have just got that belief in themselves.

“The Thursday-Sunday thing, it’s been like that for us for a while. It was the same last season when we were in the Europa League beyond Christmas and you just have to deal with it.”

Brown and his team-mates will have happy memories of their last trip to take on Derek McInnes’ side.

It was May 4 and goals from Mikael Lustig, Jozo Simunovic and Odsonne Edouard gave them a 3-0 victory and also sealed the club’s eighth successive championship.

Three points this afternoon would go a long way to nine in a row.