Celtic Quick News on News Now
You are at:Home»Latest News»OH, HAMPDEN IN THE SUN, RODGERS 8 RIVALS NONE
By CQN Magazine on 21st May 2018 Latest News

BRENDAN RODGERS enjoyed an eightsome reel at Hampden at the weekend.

The Celtic boss has transformed the national stadium from a graveyard of dreams to a Hoops fortress after taking over from Ronny Deila in May 2016.

Under the Norwegian, the team failed to progress in three domestic semi-finals – two in actual play in controversial circumstances and one on penalty-kicks. 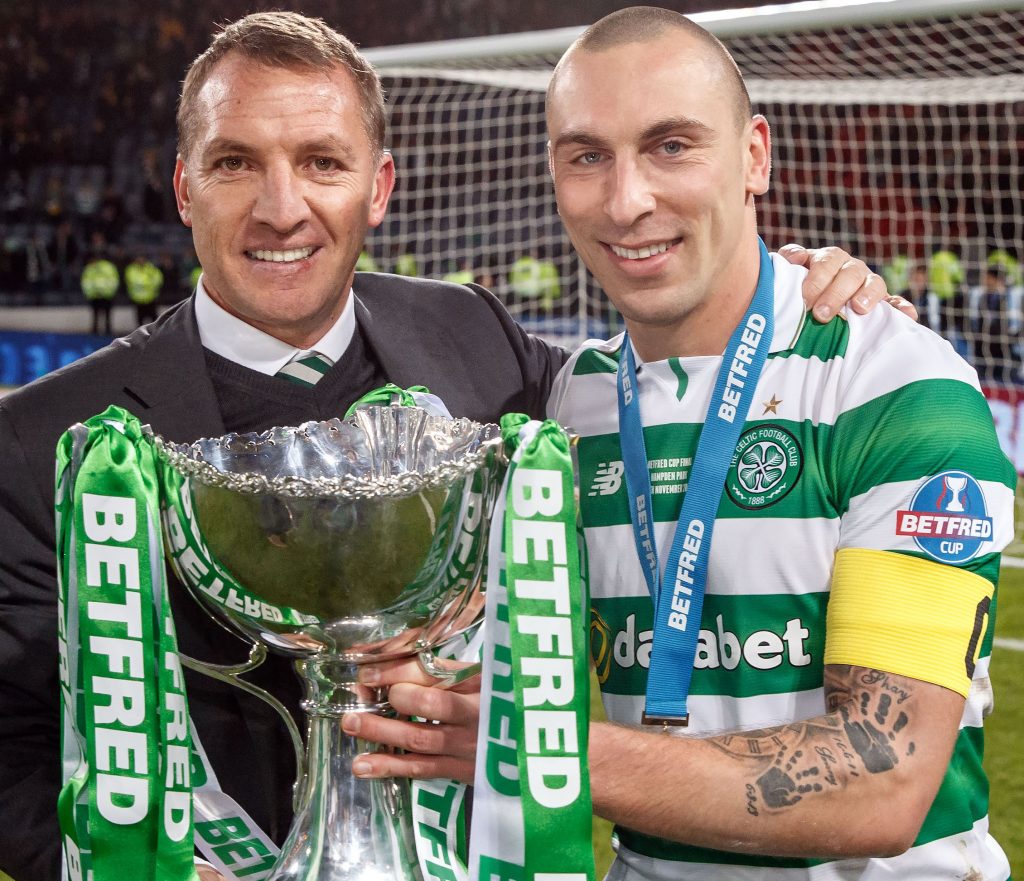 THE FIRST…Brendan Rodgers with Scott Brown after the 3-0 win over Aberdeen in last season’s League Cup Final.

Rodgers, who moved in at Parkhead within a month of that dismal display against the Ibrox Championship outfit in the Scottish Cup-tie, has now guided his team to EIGHT successive victories following the historic 2-0 Scottish Cup triumph over Motherwell on Saturday.

It was seven from heaven last month in the runaway 4-0 semi-final win over the Ibrox men, managed by caretaker Graeme Murty who was sacked just over two weeks later. 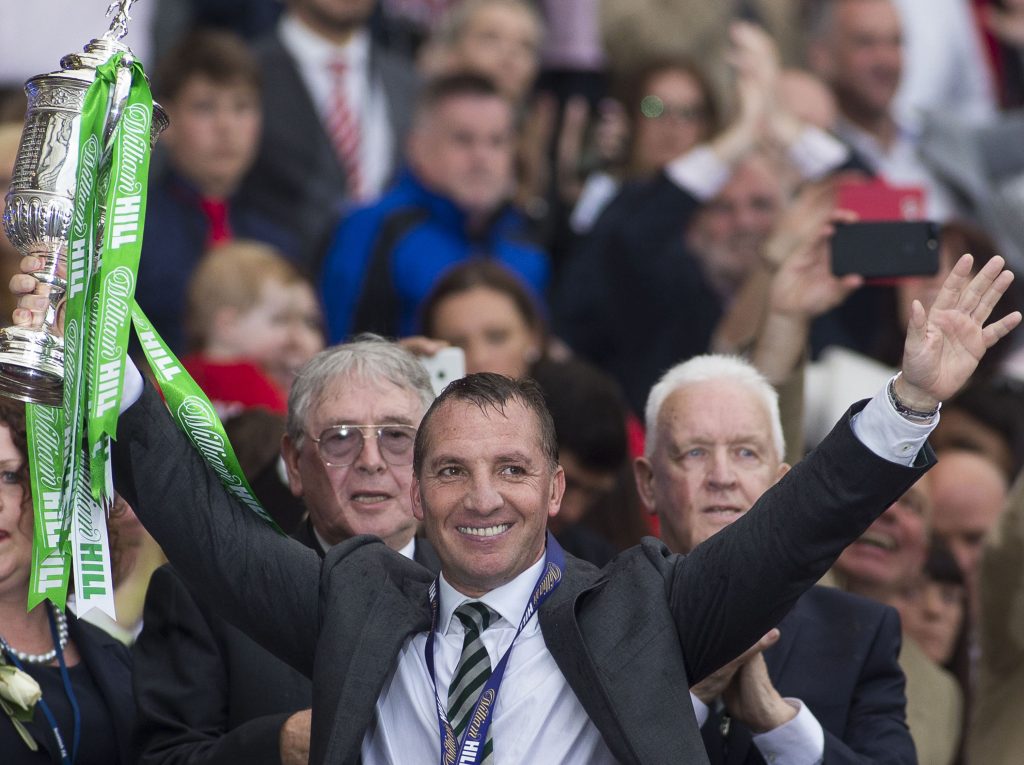 THE SECOND…Rodgers holds aloft the Scottish Cup after the 2-1 victory over Aberdeen last year. Lisbon Lions Willie Wallace and John Clark get a close-up view.

In the League Cup semi-final last season, Moussa Dembele netted in the last minute to knock out the Govan side, with Mark Warburton in charge, and the French Under-21 hitman struck again in the 3-0 win over Aberdeen in the Final with Tom Rogic and James Forrest also on target.

In the Scottish Cup last-four encounter, Callum McGregor and Scott Sinclair did the damage against the Ibrox team, with Pedro Caixinha as boss, in a 2-0 success and Stuart Armstrong and Aussie playmaker Rogic downed Aberdeen 2-1 in the Final.

In this campaign, Neil Lennon’s gallant Hibs side were beaten 4-2 in the League Cup semi-final with Dembele (2) and Mikael Lustig (2) seeing off the challenge from Edinburgh.

James Forrest and Dembele, from the penalty spot, were the marksmen in the 2-0 victory over Motherwell as the trophy was retained. 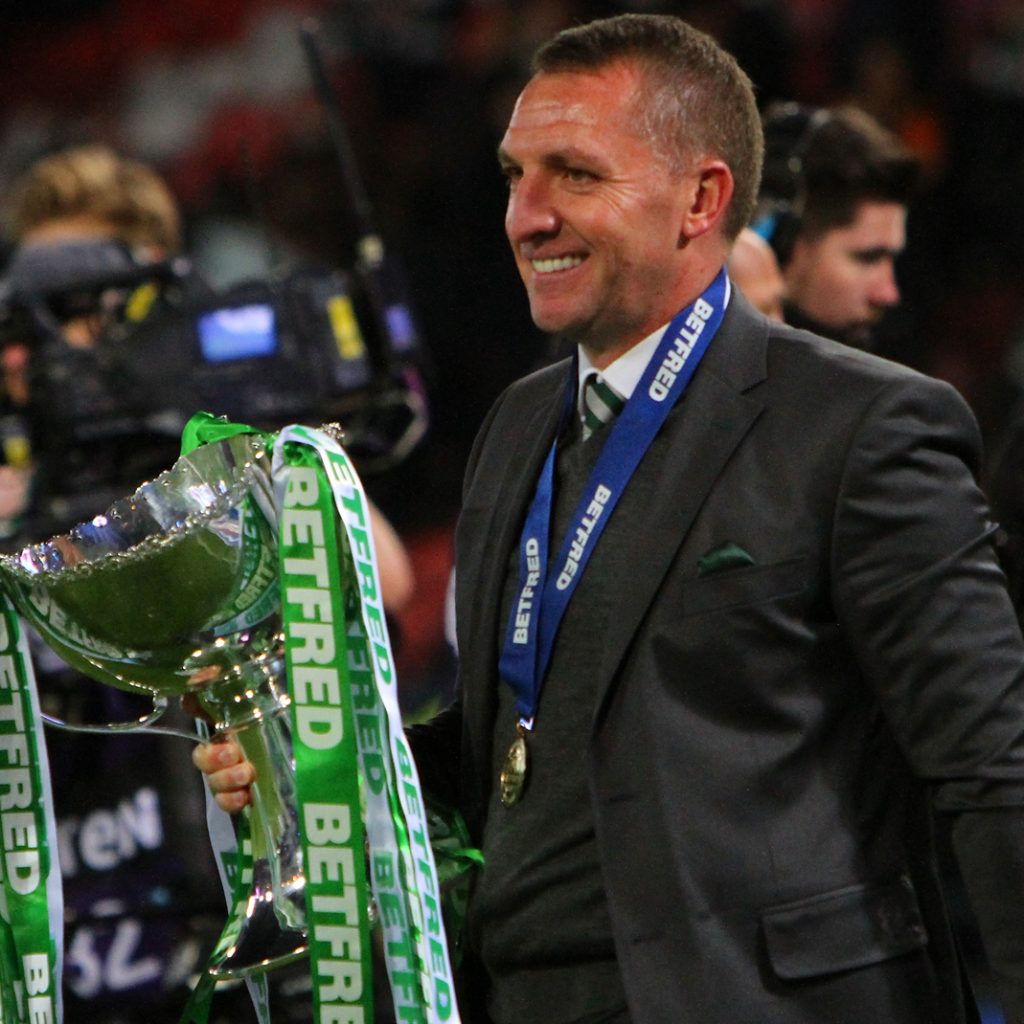 THE THIRD…Rodgers with the League Cup following this term’s 2-0 win over Motherwell.

And last month against the Glasgow neighbours, Dembele was spot on again with Olivier Ntcham also displaying his penalty-kick prowess.

Rogic and McGregor joined in and the Scotland international fired in the opener against Well in the most recent win at the national stadium. Ntcham added the second.

Looks like the so-called Hampden hoodoo has been obliterated. 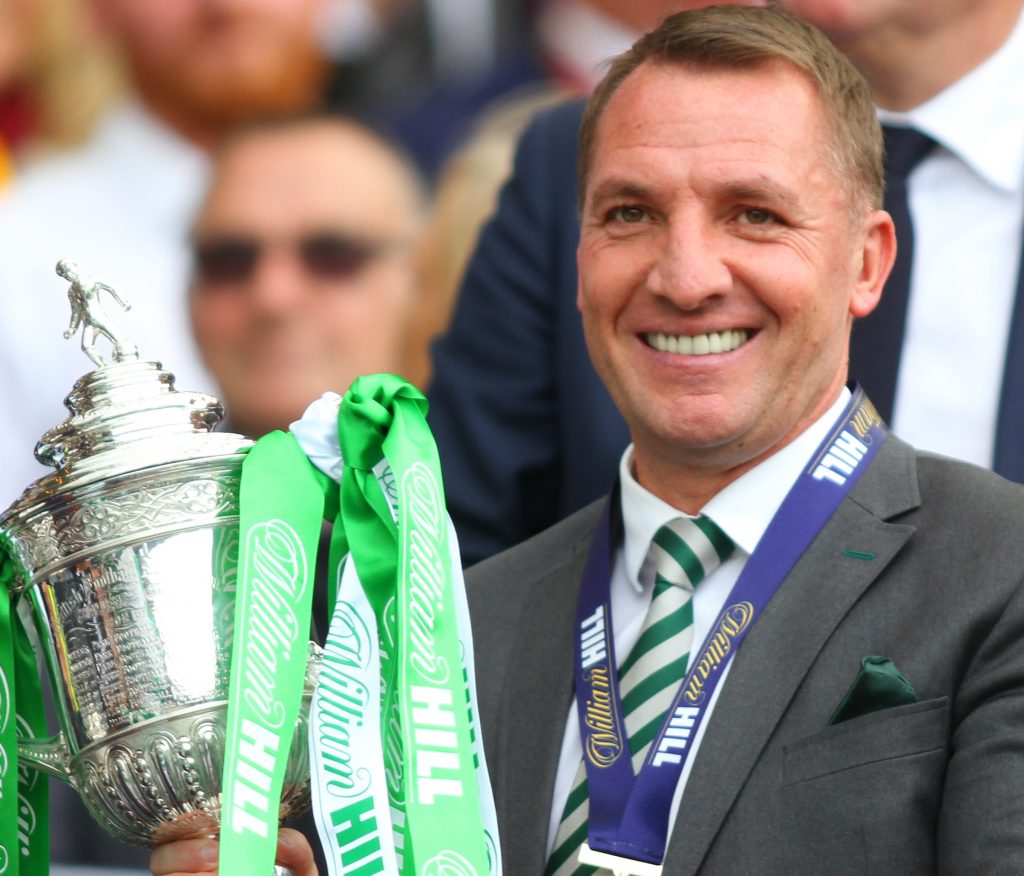