SHAMBOLIC Celtic’s death by a thousand cuts continued with a lamentable display in this appalling loss to Ross County in Dingwall this evening.

John Hughes’ side started the game in rock-bottom position in the Premiership, but they still had enough courage and know-how to overcome a disaster-strewn Hoops line-up.

County knocked the holders out of the Betfred League Cup in November and repeated the agony to inflict another pulverising defeat on Neil Lennon’s bunglers, their THIRD of 2021 in a campaign to forget.

The season is ending in a pathetic whimper when so much was expected back in the summer. However, those dreams have been buried under an avalanche of dross.

And Jordan White added to the anguish on this occasion with a simple headed winner in the 71st minute. 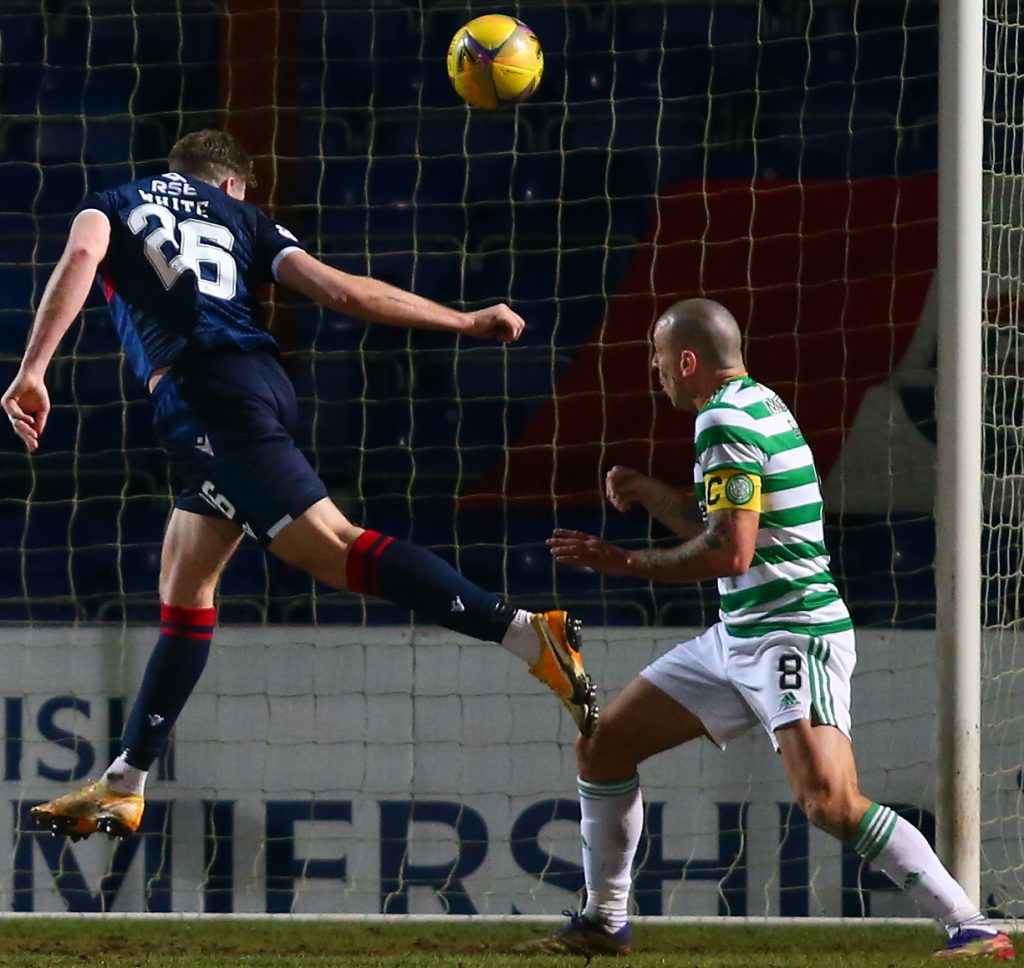 HEADS YOU LOSE…Jordan White jumps in ahead of Scott Brown to bullet in the winner.

The main talking points from a first-half mainly dominated by Celtic were two horrible misses from Odsonne Edouard and Ryan Christie and a superb save from Scott Bain to defy the Highlanders.

Lennon was forced into a change in the ninth minute when Greg Taylor limped off to be replaced by Diego Laxalt, but even at that stage it looked only a matter of time before the champions got the breakthrough goal.

Remarkably, home keeper Ross Laidlaw did not have to make a single save in the opening 45 minutes, but he should have picked the ball out of the net on two occasions.

However, he was spared the bother by a pair of x-certificate finishes.

The first howler arrived on the 25-minute mark when Christie rolled one in front of Edouard who was totally unmarked at the near post. Astoundingly, the Frenchman managed to miss completely and the ball bounced clear.

No wonder he looked more than a little astonished as he walked into the back of the net. It was just a pity the ball was not there to greet him.

HIGH, WIDE AND HORRIBLE…Ryan Christie blasts the ball off target from eight yards.

In the 37th minute, Christie came close to rivalling that for utter wretchedness when he skied over from eight yards.

On this occasion, Callum McGregor released Edouard on the left and he picked out the Scotland international unmarked and smack in front of goal.

It looked a goal all the way until he hurriedly lashed at the ball with his left foot and battered it over the bar and out of the ground.

However, their blushes were spared by an excellent save from Bain to defy Blair Spittal in the 27th minute after the Hoops defence failed to clear a route one ball down the middle.

It eventually broke to the home player coming in from the right with Laxalt trying to make a last-ditch challenge.

The on-loan Milan defender was too late as Spittal thumped it low and hard, but Bain was equal to the task and got down in a flash to get a hand to the ball to turn it round the post.

The visiting keeper had also been brought into action in only the third minute when Tony Andreu tried his luck from 25 yards, but again Bain was swift to react and dived to his right to stun the shot and grab the rebound.

There was another half-chance for the Celts with a ball from Edouard on the left, but Turnbull was slow to react and the ball was cleared.

As expected, John Hughes’ side fought like their Premiership lives depended on the result and there was little space for the likes of Tom Rogic, Turnbull or Christie to operate in as the area 30 yards from goal became a little congested.

Stephen Welsh looked accomplished alongside Kristoffer Ajer, but there were few opportunities for Jonjoe Kenny or Laxalt to make progress on the flanks.

The second-half was only six minutes old when McGregor and Edouard combined to set up Laxalt on the edge of the box, but he blazed wildly over the bar.

Christie pulled one past the left-hand post from 20 yards when he should have hit the target and then he sent in a first-timer from an angle that was pushed away by Laidlaw.

In the 67th minute, Leigh Griffiths was introduced for Rogic to add some much-needed firepower to the team. 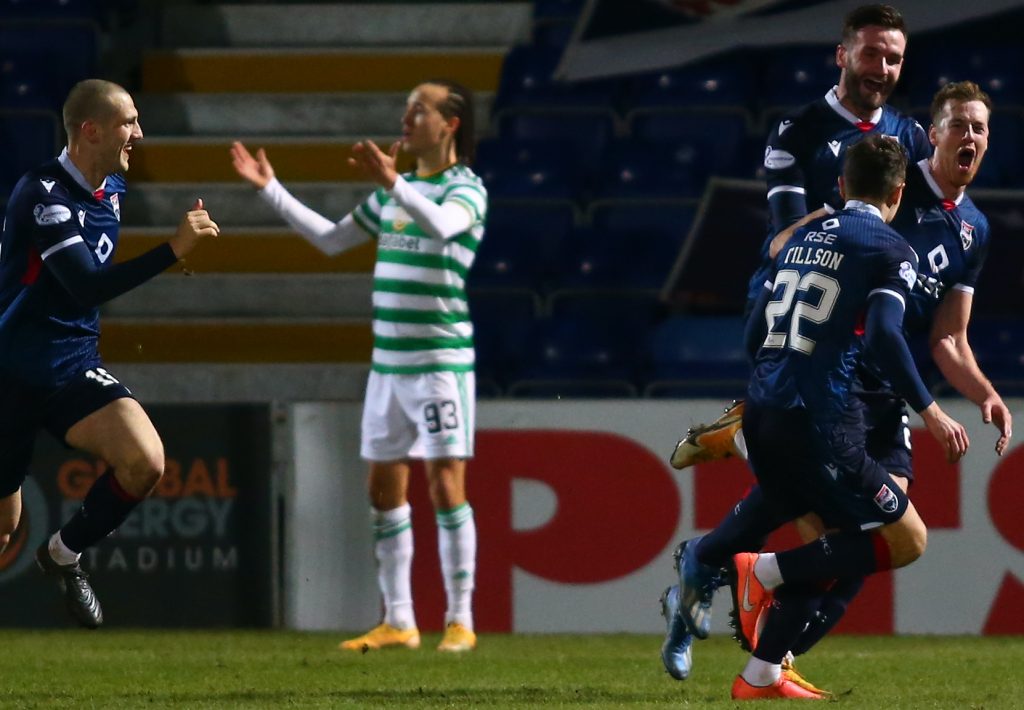 AGONY AND ECSTASY…Diego Laxalt is a Bhoy alone as the Ross County players celebrate the winner.

Four minutes later, White headed in the only goal from the game after some inexcusable defensive work by the Hoops back lot. Harry Paton slung in a free-kick from the left and Scott Brown allowed the towering frontman the freedom of the Highlands to run off him and rise unchallenged to  head past the static Bain from six yards.

It was an awful goal to lose by a team who have had difficulty coping with set plays throughout the miserable campaign.

Christie’s last action of a particularly dreadful display was to fire over the bar from a good position before making way for Mohamed Elyounoussi in the 83rd minute.

The Norwegian came so close to  last-gasp leveller with a powerful header, but Laidlaw did well to get down to beat the ball away at his right-hand post.

Ironically, the game ended with Griffiths belting a 25-yard free-kick over the bar. That was the story of Celtic’s woeful night.