The £5million striker marked his arrival at Celtic at the weekend when he rifled in the only goal of a tense encounter against Dundee United at Tannadice.

Ajeti, who failed to spark at West Ham following an £8m deal from Basel last summer, hit the ground running for the Hoops on his Premiership debut after his brief cameo appearance against KR Reykjavik in the Champions League first round qualifier on Tuesday night.

The 23-year-old Albania-born Switzerland international has impressed the champions skipper with his attitude and he refusal to be a big noise in the dressing room.

“Those are the people you want around. You want people who want to be here, who want to put the hard work in. And who can score you goals. 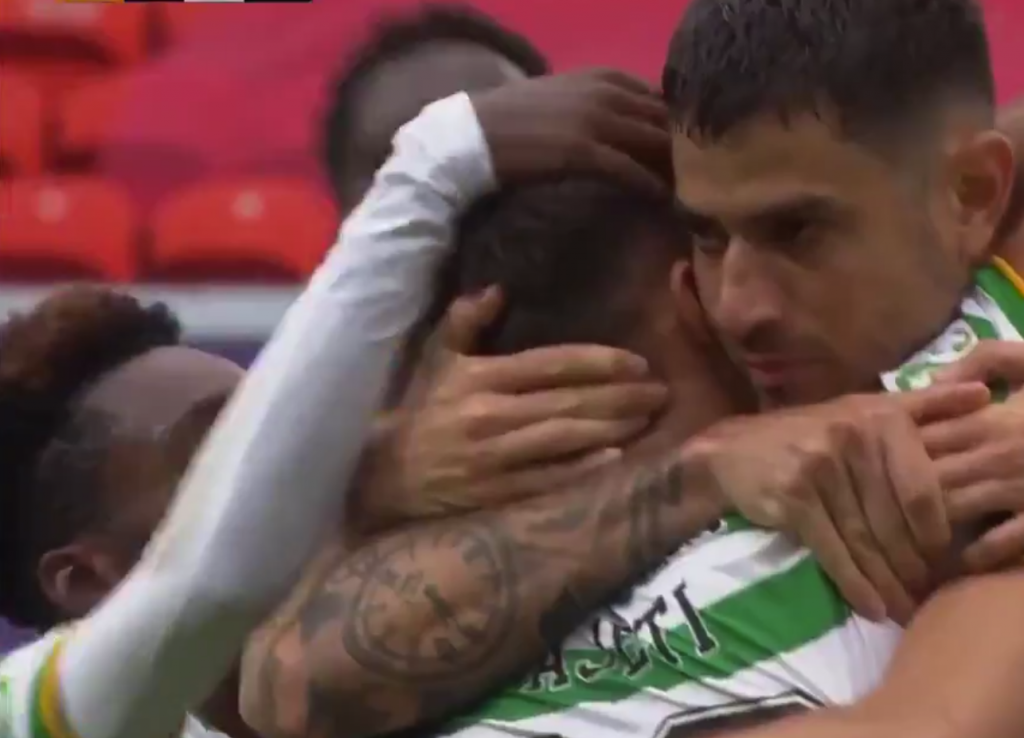 “He’s one of those guys, a nice guy around the changing room. He’s had a great attitude and he’s worked hard after having four weeks off.

“So for him to come back in, do a wee mini-pre-season, play a game three or four days after coming in, then play a bit of the game against United, it shows you his attitude is spot on.”

Celtic’s 35-year-old onfield leader continued: “I think the way he wants to play is perfect. He’s a strong boy who wants to turn people, but he also wants to get in the box and score goals.

“He’s shown his quality in training, he’s now shown it in games. We have a lot to thank him for because we couldn’t get the ball in the net against a very well organised United team.

“Here’s hoping there’s a lot more goals to come from him and the good thing is he’ll always get chances here. We create a lot in most games.

“Tannadice was a little bit different, but that is what we’ve been looking for. That penalty-box striker who will score those tap-ins. He took his goal really, really well.

“It’s just that little bit of movement in the box. I get up there and I don’t know what to do. There’s a few people like that, but these boys have this natural knack.

“Him, Odsonne, Griff,  they just know how to get the ball into the back of the net. It’s great to have those players.”

THE WINNER…Albian Ajeti swoops to fire in his debut goal with a posse of United players looking on.

Although they left it late against a gallant Tayside outfit, who had keeper Benjamin Siegrist in outstanding form, Brown was not deterred by the standard of play from Neil Lennon’s men.

He added: “They’ve got a great management staff and they pressed us really well with the wingers coming into the middle. We managed to deal with that opening half-hour, got the ball down and created a few chances.

“Nothing major in the first-half, but in the second, we just couldn’t get the ball in the net. Their goalie made some great saves from Ryan Christie, especially.

“You’ve got to be up for those battles. At the end of the season, those are the games you want to have won.

“It means a lot to us to score late on, as well, because it shows how fit we are and we pride ourselves on that.”