Celtic Quick News on News Now
You are at:Home»Football Matters»THE PREMIERSHIP WILL BE MORE COMPETITIVE WHEN THE RANGERS FOOTBALL CLUB IS A PARTICIPANT. OR WILL IT?
By CQN Magazine on 27th July 2016 Football Matters

AULDHEID this evening completes our series of articles looking at the impact that the arrival of The Rangers Football Club is likely to have in the new Premiership campaign.

Barcabhoy got us underway on Monday and you can read his analysis by clicking the link below.
https://www.celticquicknews.co.uk/the-floor-the-ceiling-and-why-the-rangers-will-struggle-to-compete-in-the-premiership/

This was then followed by a contribution from a CQNer last night, who was inspired to submit his article to CQN after reading PR fluff elsewhere. This of course is as usual being swallowed by the hordes – will they ever learn? It’s already cost them one club!

You can read this feature written by VFR800 using the link below.
https://www.celticquicknews.co.uk/the-myth-concerning-the-2026-spfl-championship-winners/

Both articles are worth reading.

To conclude the series here is Auldheid’s detailed, logical and intelligent appraisal of the likely impact the new Ibrox club will have in the big boys’ league.

It’s going to be interesting observing their supporters’ reaction as reality bites. Here’s what Auldheid reckons will happen…
The SPFL Premiership 2016/17 Will Be More Competitive When The Rangers Football Club Is a Participant…OR WILL IT?
The perceived wisdom on competitiveness is based on the seasons when Rangers Football Club (now in liquidation) was a participant in the then SPL.

The competition was tight for a top spot between Celtic FC and Rangers FC, a club whose quality of the players they were able to sign was enabled by

• bank loans it could not repay and

• more than ten years (depending on the ebt scheme it used initially (DOS aka “the wee tax case”) and what the final decision will be on the legal status of the replacement (MMGRT) ebts aka “ the Big Tax Case”).

The Rangers Football Club that starts its first season in the SPFL is not by any measure other than spiritually the Rangers Football Club that was liquidated in 2012 and does not have access to anything like the sums of money that enabled the type of competition for the title that it would appear the mains stream media are basing their argument of a more competitive SPFL Premiership on.

Obviously the football authorities want to see that same idea promoted, it helps sign up TV companies and sell season tickets, but exactly how competitive will the SPFL be next season?

A determining factor is the size of the wage bill which is used as an indicator of likely success and if that were the only factor then every season would be a foregone conclusion, but it’s not always the highest paid squad that wins. (See Leicester in the EPL, who had some luck with injuries).

A wage bill purchases two things: quality and quantity and in Scotland the quality of player all Premiership clubs can attract is not top bracket.

So the trick is to attract better quality than the rest and more of them so that when injuries etc occur the wage bill can make a difference.

In that respect Celtic, with a new manager and the ability to strengthen, should over the season come ahead of the rest and for the league to be competitive as in the days before Rangers FC were liquidated the question will be by what margin?

That margin depends on the rest.

Is there that much of a difference in squad in both quality and quantity of quality terms amongst the other clubs to suggest that there is going to be competition for the title?

The current perceived wisdom is that competition for the title will come from Aberdeen FC, Hearts FC and The Rangers FC as main contenders and, football being football, will on any given day throw up a result that suggests competition.

For example on the opening league fixture The Rangers FC play Hamilton at Ibrox whilst a day later Celtic FC play Hearts FC at Tynecastle. It is possible that after day one, if Celtic and Hearts draw (or Celtic lose) and The Rangers FC win it looks like and will be presented as the start of a competitive season. (nice commercial fixture arrangement there SPFL – who does the programming? ) but over a full season what will the disparity in quality and quantity of quality produce?

With the qualification that football is unpredictable and nothing is certain, it is nevertheless an accepted truism that in a league competition over 38 games the end result is more predictable than a one off game or cup tie.

So with that proviso and acting on the assumption that Celtic, with an advantage based on quantity of quality over the others, will take more points from their main rivals Aberdeen FC, Hearts FC and The Rangers FC than the rivals will take from each other and all four will take the same number of points from the other eight club, the league at the end of season 2016/17 (and assuming no other factors at play) as the following table predicts, will see Celtic win the title by 14 points. 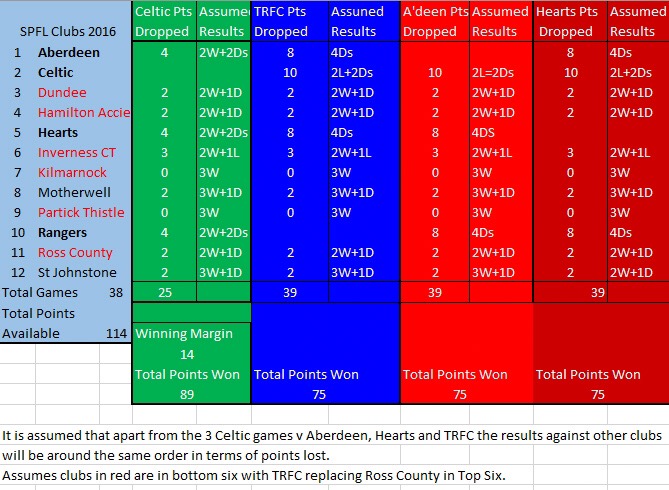 We welcome the chase. Hail Hail.

Written by Auldheid for CQN.

If you don’t laugh your socks off we’ll be surprised! Get your copy exclusively at www.cqnbookstore.com now for only £9.99.
A big thank you to everyone who has bought this brilliant wee book so far. Remember to share with friends so that as many people as possible can laugh at Rangers ( and The Rangers!)