Celtic Quick News on News Now
You are at:Home»Exclusive Series»THE SPIRIT OF 67: ROAD TO LISBON v ZURICH
By CQN Magazine on 5th May 2020 Exclusive Series

Today, Alex looks at the first hurdle on the way to that memorable triumph in the Portuguese capital on May 25 1967 when the stubborn Swiss champions of Zurich made life tough  – until one man decided to take centre stage.

TOMMY GEMMELL wasn’t to know it on the evening of September 28, 1966 in the east end of Glasgow, but he was just about to have a major say in Celtic conquering Europe.

The raiding defender’s reputation of being the possessor of a pulverising long-range shot obviously hadn’t worked its way through to Switzerland. If it had, Celtic would most assuredly struggled to make the breakthrough against an extremely competent Zurich outfit.

It was still goalless after the hour mark and the fans were beginning to get more than just a little bit anxious. The Swiss defence was doing its job well and the main threat of Joe McBride was being blunted. 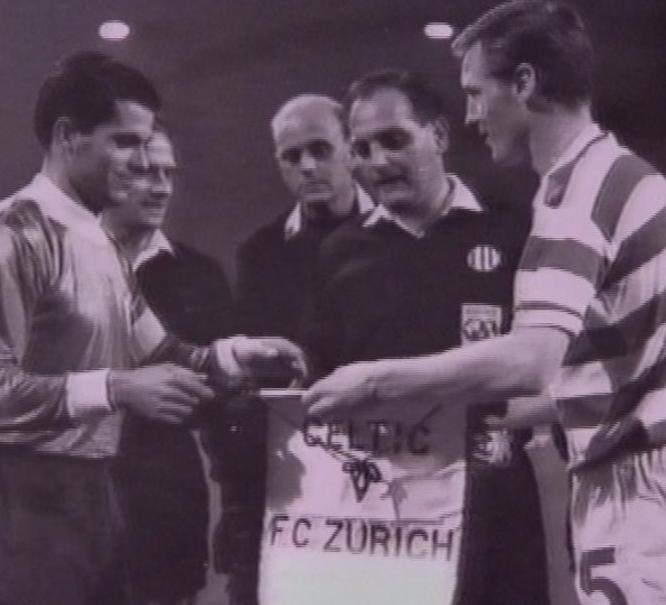 READY FOR THE TRIP OF A LIFETIME…Billy McNeill swaps pennants before the kick-off against Zurich.

This was Celtic’s first-ever European Cup game and they wanted to mark it with something special. Gemmell was the man to provide that ingredient.

The clock ticked round to the 64th minute when John Clark broke up a Swiss breakaway and passed a neat ball out to Gemmell, playing at right-back that evening with Willie O’Neil on the left.

Gemmell, a few yards inside enemy territory, nodded the ball forward and must have been surprised that there wasn’t a posse of defenders immediately swarming around him as he prepared to surge forward. Zurich backed off and Gemmell didn’t need to be asked twice about having a pop at goal.

Celtic fans, knowing what was about to happen, held their collective breath in anticipation. Tommy took a swift look up, got his eye-to-ball co-ordination absolutely right, summoned all the power in his frame and swung his mighty right boot at the spherical object.

The ball was a mere blur as it took off from about 25 yards. Goalkeeper Steffen Iten, who had looked safe and sound all evening, hardly moved a muscle as the missile zeroed in on its target before smashing into the rigging at his top left hand corner. It was hit with such frightening pace that the Zurich No.1 probably did himself a favour by not going anywhere near it. 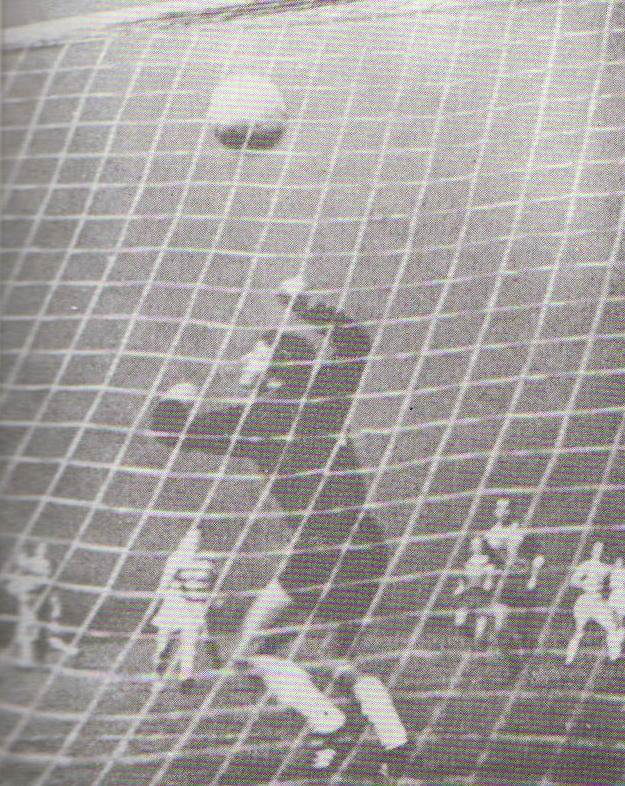 SMASH’N’GRAB ACT…Tommy Gemmell’s long-range drive explodes over the head of  Steffen Iten for the breakthrough goal.

Gemmell punched the air in delight, relieved team-mates bounded in his direction, Jock Stein, celebrating his 43rd birthday, bounced out of the dug-out and Parkhead was engulfed in delerium. Understandably, the Zurich heads went down.

They had played a cool and controlled game and always looked dangerous on the break. Now they were a goal down with almost half-an-hour still to play in an intimidating atmosphere.

Five minutes later it got even worse for the visitors – suddenly Celtic’s advantage had doubled. Clark, with the minimum of fuss, broke up a Swiss raid and passed out to Gemmell who switched it inside to McBride.

The striker darted for the danger zone and played a wonderful one-two with Bertie Auld, whose cheeky backheal completely wrong-footed the rearguard. McBride was another who would always have a go when he saw the whites of the poalposts and he did so again from the edge of the box.

WHIPLASH…Joe McBride’s low drive zips into the Zurich net for the second goal.

It took the merest of touches off a desperate defender as it swept beyond the sprawling Iten, but there is every chance it would have found the back of the net in any case.

The game ended in a controversial note, though, when it looked as though McBride had claimed a third goal. Certainly there was nothing wrong in the manner in which he scored and there was no question of him being offside. The referee blew for time-up and thousands of puzzled supporters emptied out of Celtic Park wondering if their favourites had won 2-0 or 3-0.

It transpired the fussy match official had blown his whistle just as the ball was crossing the line. So, Celtic had to settle for a two-goal lead to take to Zurich. In the end, it didn’t matter. 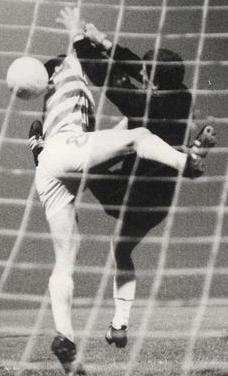 UP AND AT ‘EM…Joe McBride challenges keeper Steffen Iten for a high ball.

CELTIC confounded the European experts by attacking the Swiss on their own ground. They were expected to erect a fortress in front of Ronnie Simpson in an effort to hold onto their 2-0 first leg advantage.

Someone forgot to tell Jock Stein!

Gemmell, torturer-in-chief in Glasgow, walloped in the opener in his usual booming style and it was all over when Bobby Lennox flicked on a right wing corner for Steve Chalmers to fire under the keeper’s body.

Just to add to the flavour of the evening Gemmell claimed his third goal over the two ties when he crashed in a penalty-kick. Keeper Iten had learned from the first leg – he went the wrong way!

TOMORROW: The Spirit of 67: The Road to Lisbon: Nantes