Celtic Quick News on News Now
You are at:Home»Latest News»‘WE DON’T NEED ANYONE ELSE TO PAT US ON THE BACK,’ CALMAC
By CQN Magazine on 10th May 2019 Latest News

CALLUM McGREGOR insists the Celtic players are not one bit bothered at not being acknowledged as champions before the game at Ibrox on Sunday.

And the Hoops playmaker is certain the team will show why they have won the title for the eighth season in succession by avenge their defeat against Steven Gerrad’s side in Govan before the turn of the year.

McGregor, speaking to the Daily Record, said: “We know we deserve to be champions, that’s enough for us.

“We don’t need anyone else to pat us on the back. The players are focusing on doing their jobs and that’s all we have done over the past few years.

“We are here to do the club proud and win titles.

“That’s part and parcel of being at Celtic – you have to win the league. What other teams do doesn’t really affect us.

“I know other teams have done it, but if that’s the decision they want to take then that’s fine. It won’t bother us.

“It hasn’t been spoken about, to be fair. We all know how big these games are, anyway.

“We are not looking at any narrative outside the game. We are just focused on going to Ibrox to turn up on the day and try to win the match.” 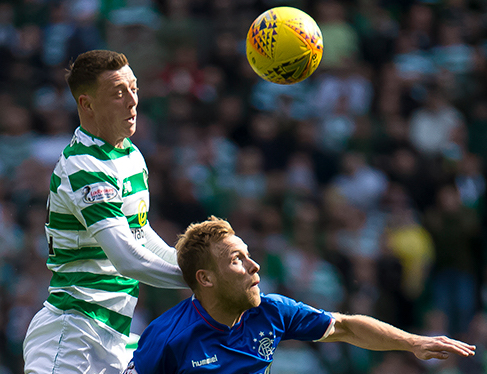 McGregor added: “There is always a bit of spice in the fixture.

“For us, we have a bit to prove, coming off the back of the December match there.

“We didn’t do ourselves justice that day and it has been burning in the back of the players’ heads since then – that when we go there again we have to give a much better account of ourselves.

“It’s good we are going there as champions, full of confidence and playing well.

“The pressure is on them. They have to come and give their fans something to cheer about.

“We’ve won the League Cup, won the league and are in another Cup Final.

“All the pressure is on them. We go there with good confidence – not arrogance at all – just confidence that if we turn up on the day and play well then we can hope for a good result.

“I think the game at Ibrox was the one time in a two-and-a-half or three-year period when the boys didn’t turn up in a big match.”

A first-half strike from Ryan Jack ricocheted off Scott Brown’s heel to leave Craig Gordon helpless in the flop in Govan.

However, McGregor and Co have enjoyed better fortune in the east end of Glasgow with two odd-goal wins.

Oliver Ntcham netted the only goal of a one-sided encounter in September where the Frenchman also clattered the woodwork along with team-mates James Forrest, Mikael Lustig and Leigh Griffiths.

Forrest claimed the winner in the 2-1 victory in March after Ryan Kent had levelled following Odsonne Edouard’s brilliant opening goal.

Now all eyes are on Ibrox at the weekend when Neil Lennon’s men intend proving why they are the best in the country.