Celtic Quick News on News Now
You are at:Home»Football Matters»‘WE’LL BOUNCE BACK,’ MACKAY-STEVEN
By CQN Magazine on 1st February 2016 Football Matters
GARY MACKAY-STEVEN is urging his Celtic team-mates to get over their Hampden heartbreak and move nine points ahead of Aberdeen when they clash at Pittodrie on Wednesday.
The winger scored in 27 seconds in the League Cup semi-final against Ross County before the Hoops had Efe Ambrose sent off and ended up losing 3-1 in highly controversial circumstances.
Ronny Deila’s Treble dream has been obliterated for the second successive season and Mackay-Steven, who joined the club a year ago along with Stuart Armstrrong from Dundee United, believes they will come up with a suitable reply against the Dons.
He said: “It’s not nice. We had an eye on wanting to win a treble, but that is gone now and we move on.
“There is still a lot to play for and there is no bigger game to play straight after this than on Wednesday against Aberdeen.
“We are looking to bounce back in that.

“Well, I think all the boys, me included, cannot play a game quickly enough after a defeat like the one against Ross County.

“Now we will be looking to right that wrong.” 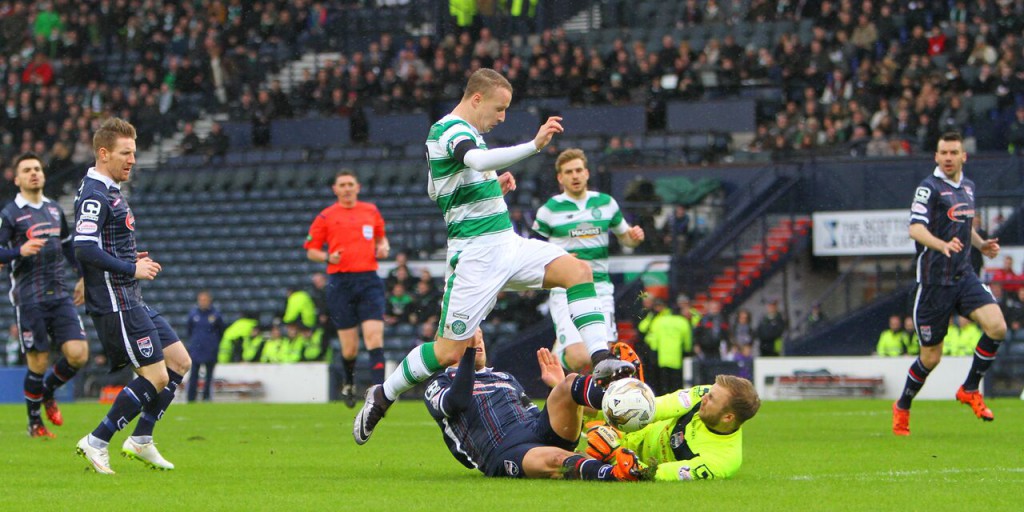 Despite having more possession, shots on and off goal as well as corners, the closest the Parkhead men came to pushing towards extra-time came in the 77th minute when Leigh Griffiths’ penalty was saved by Scott Fox with the Highlanders leading 3-1.

It was a splendid opportunity carelessly tossed away, but Mackay-Steven would not dwell on it.

He said: ““Yeah, there was a chance for us, but we had a few opportunities in the game and didn’t take them.

“Ross County did and that’s why they are in the final.
“We are bitterly disappointed with how the game went. We missed out on a chance of a final so we are gutted.

“A lot of credit has to go to Ross County. They came here and dug in really well, so good luck to them.”

Mackay-Steven added: “We created a few chances in the first 15 minutes. Unfortunately, we had a man sent off and that knocked us a little bit.

“But I think, in the first half, once we moved the ball about, we played some good stuff.

“I think the big sickener for us was losing a goal so early in the second-half from switching off at a set-play.”