WHAT follows is the first chapter of a novel written by Tom Campbell. It’s a work of fiction and is fascinating in that it looks at what could have happened had a few things worked out differently. It is a fascinating read from a great Celtic writer. CQN will continue the story over the next few weeks so look out for chapter 2.

A Very Different Paradise, while clearly a work of fiction, does give a remarkable insight into how the club was actually run and is well worth a read…

The CQN Podcast – A Celtic State of Mind has recorded an interview with former Celtic director Tom Grant and this will be available in a few weeks as we have various other Podcasts to come out first! There is a new one this evening!

If you missed the Podcast featuring Jim Craig it is available at the end of this feature and is a brilliant, emotional and very funny listen!

Anyway over to Tom Campbell… 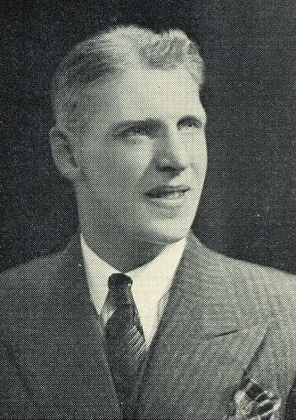 Bob Kelly, a director of the Celtic Football Club, sat alone at a window table of the North British Hotel and stared out at George Square somewhat morosely.

His sharp eyes took in the changes that three months of World War II had occasioned: hundreds of sand-bags piled up against the ornate City Chambers as a safeguard against air-raids by the Luftwaffe, temporary buildings erected around the square with queues of Glaswegians lining up patiently, trying to find a way through the bureaucratic maze to find and complete application forms for ration cards, petrol permits, clothing coupons and information on finding the distribution centres for gas-masks.

He realised with a start that more and more men were in uniform. In his late 30s Kelly was too old to volunteer for active service; and, besides, a withered right arm – the result of a childhood accident – would have put paid to any such ambitions.

He approved of the preparations. At least they’re not trying to fool anybody this time that the war will be over by Christmas. When it does really start in earnest, it’ll last for a long time – at least as long as the Great War. Watching the rain start to fall – and the crowds hurrying by – he congratulated himself upon having arrived early for his appointment. Punctuality, the politeness of kings – as his father had drilled into him and indeed all his sons.

He waved away the waitress, hovering nearby, and started to ready himself for his rendezvous with Tom White, the club’s elderly chairman. What could he want? The brief phone call earlier that morning had revealed very little: “… important that you and I meet … away from the other directors … serious issues to be resolved … discretion necessary.”

It has to be the matter of Maley. He knew that White’s relationship with the long- time manager had never been cordial but they had degenerated into open hostility shortly after the Jubilee Dinner of 1938. White has a right to be aggrieved: a handsome gift of 2,500 guineas to the manager, the perfect opportunity for him to fade away into the background … but Willie Maley never had any intention of retiring. That has to be the problem.

Kelly’s thoughts were interrupted by the arrival of the chairman, a heavily built man in a camel-hair coat and the definite air of authority, despite his age.

“Have you ordered anything yet?” White demanded, summoning the waitress. “I’m having a whisky, and you?”

Kelly nodded agreement, feeling somewhat abashed that he had not already ordered a drink. White always has that effect. Always taking charge no matter the circumstances. Makes you feel uncomfortable.

“A decent place, this, “ White commented after his first sip of the whisky and Kelly had to agree. “It’s a good place for a meeting. Public enough and not too secretive. I wanted to speak to you, Robert, away from the other directors because some critical decisions have to be taken – and taken relatively soon.’

“Away from the others?” Kelly ventured, but White treated the slight objection with a dismissive wave of his hand.

“Robert, for all intents and purposes there are only two directors of the club capable of making decisions. You and I. The Colonel? He was at his best in the last war and he’s only going through the motions these days. As you know, he rarely participates at our Board meetings and, besides, he sees himself as a grandfather to the reserve side.”

White was in full spate now, as always confident that he would not be contradicted, ” Tom Colgan, I have it on good grounds, is planning to retire to Eire for the duration – and, in that event, he’s of no use at all. John McKillop? I believe he’s in poor health and is thinking of participating less in Board matters – if that is possible.”

He paused before continuing. “And that leaves you and me, Robert.” He waited – for another sip of the whisky and for dramatic effect. “ And decisions have to be made. Important decisions.”

The younger man was forced to agree with his chairman’s assessment. Colonel John Shaughnessy, a fixture on the Board of directors since 1911 had slipped quietly and easily into his elder-statesman role, Devlin, at Celtic Park since 1904 or 1905, had lost much of his enthusiasm for the club while still retaining a keen interest in the annual dividend, McKillop was much the same …

With a sudden start he realised that he, Robert Kelly, was the one active director who actually cared about the football. Who else goes home at night after Celtic losing a game and feels the way I do? The chairman is not interested in Celtic as a football club. My own father, Celtic’s first captain, never really trusted him, and he knew him for years: “Never played the game, himself. Only interested in balance sheets (and maybe Irish questions).””

But at this moment he had to agree with him.

White continued, “The first thing is to settle the situation with Maley. He has to go. No doubt about it.’

“I don’t think he’ll be prepared to go quietly. I can’t see him agreeing to go.”

‘You’re right, of course. Look at it this way,” and White paused for another sip of whisky. “As secretary/manager he is nothing more than an employee of the club – and, as such, his term of employment can be terminated with due cause.”

“Do we have sufficient justification? And another thing – he’s been with us for more than fifty years, a lifetime of service.”

“Agreed. And he was paid handsomely for every one of those years – and look at the honorarium we gave him at the Jubilee Dinner a year ago. He should have taken the hint at that time.”

Kelly nodded agreement, a shade reluctantly. “He did not do himself any favours by complaining about the tax he had to pay on it.”
“You do realize that he has contemplated legal action against the club for that. If that’s what he wants, I’ll give him ‘legal action’.” The voice was slightly raised, anger adding the emphasis. “You asked about ‘justification’. Frankly, we don’t require any but from the point-of-view of the football alone we would be justified. What are we in this new league? Second last – and not too much prospect of improvement. Celtic second last! Just think of that!”

Over the next few minutes, as Kelly listened, White underlined his complaints against the manager: at more than 70 years of age, he was too old, his failing sight meant he was no longer able to drive his car especially in black-out conditions, his general health had suffered, he had become even more blunt and autocratic, more and more out-of-touch with his players, very withdrawn at times…

“Besides, you realise that he is not fully qualified to be secretary of a club like Celtic. Allegedly, he has some preliminary qualifications in accountancy but that’s not enough. I am particularly concerned about some of our accounting.”

Another careful sip of the whisky, and he continued but with his voice lowered. “He has had unchecked access to tickets and gate-receipts. Do you realise that he takes all the money from the turnstiles back to his Bank Restaurant after every game – and then sometime during the next week he condescends to tell us what they are? I cannot think that is a suitable arrangement – especially when there is tension between him and his employers.”

“Are you questioning his honesty?” ‘No, but I am right to be concerned.”

Kelly pondered. The chairman is a lawyer above everything else. He won’t come right out and slander or libel the manager. Nobody’s ever questioned the manager’s honesty or reputation in public. But he was being convinced; the chairman had struck a responsive chord. The manager has always been too dictatorial, even abrupt with directors at times, especially recently.

“The timing could not be better. People are more concerned about the war, and won’t waste too much time thinking about a football manager being released. With the rationing of newsprint coming into effect not too much will appear in the papers … and, if we announce it round about New Year, it will sink without trace.”

“Will it be decided at a Board meeting?”

“Yes, it will have to be but I think I will speak to him in advance to prepare him for the shock.” His words were emphatic, and Kelly felt suddenly uncomfortable, almost guilty for a second as realisation struck him like a blow to the face.. He doesn’t like him one bit. Tom White is actually looking forward to firing the manager, and here you are agreeing with what he’s saying.

“You did suggest that there were other matters to discuss.”

“Yes, I did, “White said quietly, almost too quietly and suddenly looking every one of his nearly seventy years. Bob Kelly looked up sharply, and studied the chairman’s lined face; he observed the dark shadow under his eyes. “This is between you and me in the strictest of confidence.”

And he paused long enough to assur himself he had Kelly’s agreement. “ I am not in the best of health myself, and I think it’s time to think about who will succeed me as chairman. I would like you to be the designated heir. You would be the best choice.”

A wintry smile flickered across his features. “Frankly, nobody else on this Board is suitable.”

Kelly sat back, his whisky untasted. Chairman of Celtic. Just like my father. Times are changing at long last. Things will change at Celtic Park, and for the better.

“It’s a great honour, of course, and I appreciate you thinking of me …”

White waved away the words. “That’s settled then. But we have another matter to consider. With Maley gone, we need a secretary, and I think it’s time Desmond took some part in the actual running of the club…”

Desmond White? Kelly, of course, knew him well. A tall, often ungainly, young man – although he had been a reasonable goalkeeper for Queens Park. And he is a trained accountant.

The realisation struck Kelly rapidly. It’s going to be a deal – and everybody wins. I’ll be chairman when the time comes and, with the help of my vote, Desmond White will be secretary. I wonder how many other directors he has hinted to about Desmond’s qualifications.
He had to admire his chairman’s skill in manipulating the situation, in having him agree so quickly and effortlessly. No, he didn’t manipulate me. This is going to be for the greater good of Celtic Football Club …