VAKOUN ISSOUF BAYO’S dream two-goal first start for Celtic has been wiped out by SPFL chiefs.

The Ivorian striker claimed two goals in the champions’ 3-1 Premiership triumph over Hearts at Parkhead on Sunday, as CQN reported.

Petty Tynecastle boss Craig Levein insisted the strikes should be credited to his own defenders Christophe Berra and Craig Halkett.

Hoops gaffer Neil Lennon awarded the efforts – the first and third with Callum McGregor netting a scorching low drive in between – to his player and, in fact, added he thought he should have finished the game with the matchball after hitting the woodwork with a header which would have brought a hat-trick on his initial kick-off for the club after three substitute appearances. 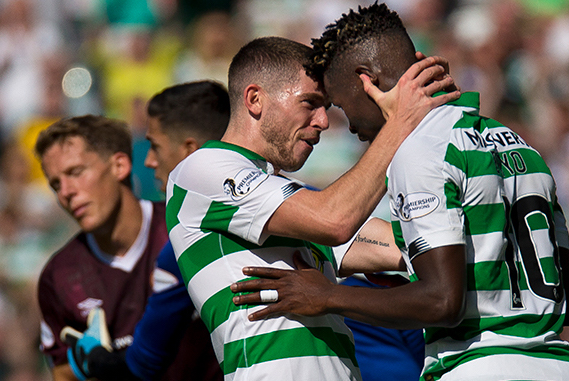 NO GOAL ONE…Bayo is congratulated by Ryan Christie.

Unfortunately, the SPFL have agreed with former Scotland international gaffer Levein and have STRIPPED Bayo of his double.
The first saw the £2million hitman challenging Berra, the Edinburgh side’s captain, for a high cross from James Forrest on the left. The ball was deflected beyond keeper Joel Pereira and, at the time CQN credited it to the Hearts player in the match report although even slow motion pictures were inconclusive.

The second came from a low cross from Kristoffer Ajer on the right and Bayo went for it with Halkett after making a darting run to the near post. Again, the ball was diverted into the net and it looked as though the Ivorian had got the final touch. 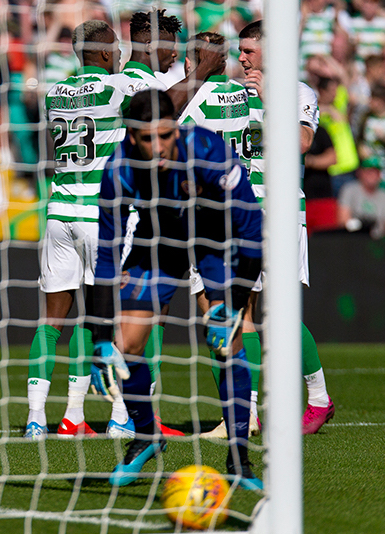 NO GOAL TWO…Bayo is centre of attention again, but SPFL bosses ruled out his strikes.

However, the SPFL judgement has gone again the impressive 22-year-old who looked eager and lively against rugged opposition and at least proved conclusively he is over the hamstring problems that blighted his early months at the champions.

So, the search for his first domestic goals will go on. Bayo could rectify that situation at Ibrox on Sunday.