SCOTT BROWN has urged his Celtic team-mates to carry on winning to get Neil Lennon the manager’s job on a permanent basis.

The Irishman returned to Parkhead on Tuesday to take the role on an interim basis following Brendan Rodgers’ sudden departure to a mid-table Premier League outfit.

And already Lennon has achieved TWO things that were outwith the scope of the new Leicester City manager this season – he has beaten Hearts and Hibs in Edinburgh in successive games.

A stoppage-time effort from Odsonne Edouard handed the champions a 2-1 success at Tynecastle in midweek to keep them eight points ahead at the top of the Premiership with 10 games to play.

A goal from Kyle Lafferty had given Craig Levein’s side a 1-0 win over the champions in August.

And a double salvo from James Forrest and skipper Brown blasted the holders into the Scottish Cup semi-finals with a 2-0 triumph at Easter Road last night, a venue where Rodgers saw his team beaten by the same scoreline in December.

The victory over the club he left in January edged the Hoops closer to an unprecedented treble treble – and Lennon nearer to getting the nod to take over in the forthcoming campaigns. 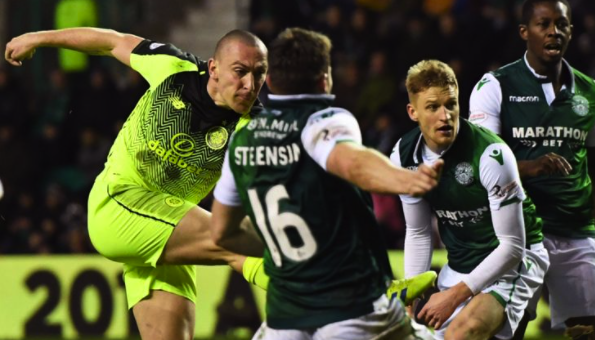 The returning gaffer labelled Forrest and Brown Celtic “greats” after their performances in Edinburgh and the 33-year-old all-action captain, speaking to the Sunday Mail, said: “To hear the manager call myself and James greats, that’s phenomenal because he is one of the greats at this club for what he did as a player.

“He won a treble and got to the UEFA Cup Final, so coming from him it’s fantastic. But we need to keep our feet on the ground and just continue to win games.

“It’s not my decision, but the gaffer knows this club inside out. He was brilliant for me the first time round and he’s fantastic for me now. So, as long as we keep winning, we’ll give him the chance to become manager beyond the summer.

“I kept in touch with Neil the whole time he was away, even when he was down in Bolton. We’ve got a great bond and strong relationship.

“He’s more chilled out now. He’s not a ranter and raver. He focuses on training and tactics, how we can break down teams.

“He wants to play the same kind of football as we did under Brendan and push on from there. And he’s got John Kennedy beside him and he is a manager in the making in terms of what he does every day. He wants to play football the right way, after learning from a couple of great bosses.

“People could use Brendan leaving as an excuse. But, for us, we have games to win every three or four days. We go again on Saturday against Aberdeen which will be a hard game, but we’re already focused on that.

”It’s been a roller-coaster, but we’ve got two good results in the space of a few days.

“We’re in another semi-final at Hampden which was a really good venue for us under Brendan. Here’s hoping it can be a great place for us with Neil, as well.

“We’re very motivated and the longer games go on, the stronger and fitter we look.

“It’s been great to get two victories at difficult venues. Easter Road has been a tough place to win at for us, so it was a great victory. 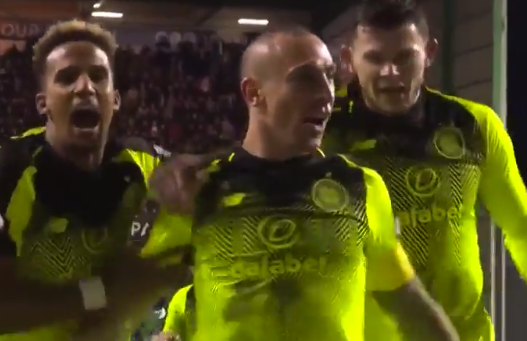 JOY BHOYS…Scott Brown celebrates his strike along with Scott Sinclair and Oliver Burke.

“It was a good team performance from us. We just concentrated on our own game-plan. James was outstanding and his goal set the tone for us.

“We knew when we scored that Hibs would have to come out, so we could find gaps in behind.

“We’re just enjoying playing football and winning games. We need to keep pushing on now. We’ve got one Cup, we’re doing well in the league and now in another semi-final.

“We want to take this as far as we possibly can. Everyone in the dressing-room understands the situation now.

“Neil has come in and been fantastic. We have to focus on that now moving forward.

“We’ve always been close as a squad. That’s been shown in the last two and a half years by winning seven trophies.

“No-one has ever got in between us and the dressing-room has always been fantastic.”