CELTIC were deadlocked in their second consecutive blankety-blank performance against Livingston at Parkhead this afternoon.

The Hoops couldn’t get a goal in the previous meeting in Lothian in November and they staged an unwanted action replay as any chance of an eighth title party was delayed.

In the fading moments, substitute Oliver Burke emphasised a dire confrontation by hitting the ball wide from four yards after keeper Liam Kelly had fumbled a low drive from Odsonne Edouard.

Unfortunately, it was so typical on a day of massive frustration for the Hoops.

WHAT A MISS…Oliver Burke fires past the post in the fading moments of the scoreless stalemate.

Livi started with a flurry and forced two corner-kick inside the first two minutes with Scott Brown making a decisive clearance from the first deadball effort from the left.

In the 25th minute, he made an instinctive stop from comeback Bhoy Tom Rogic from a clever left-wing Kieran Tierney cross to deny the Hoops again.

The tempo of the game dropped as the home side dominated possession, but failed to make a decisive breakthrough against back-tracking opponents.

Kelly again came to his side’s rescue when he raced outside his box to boot clear from Edouard. 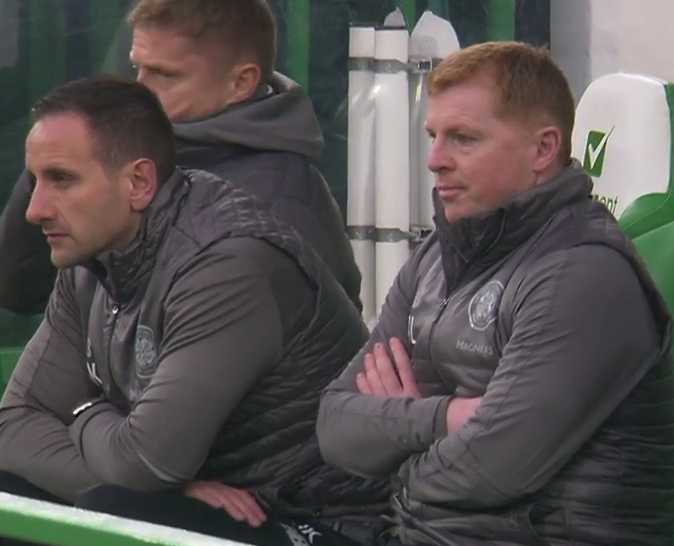 He denied Rogic again when he threw himself to his right to palm his shot away and the ball was smuggled clear as Christie was poised to pounce.

The first-half petered out with the Hoops in possession, but showing little inventiveness in their efforts to penetrate a defence that repelled all their efforts in the previous meeting in Lothian earlier this season and were displaying the same ability in the east end of Glasgow.

After the turnaround, there was still a lack of urgency from the home side as they made little of their possession during a frustrating passage of play against well-drilled opponents.

In the 63rd minute, Neil Lennon made a switch with Jonny Hayes replacing Filip Benkovic as he changed the formation to ask some more questions of the visitors’ rearguard.

There was a lot of huffing and puffing from the home side without any breakthrough and there was no surprise when Timothy Weah came on for the tiring Rogic in the 71st minute.

Closing in on the 80th-minute mark, Livi ditched all pretence of looking for a goal as they dropped every player deep into defence and asked questions of their opponents.who toiled to provide the answers.

On 83 minutes, Burke joined proceedings as a replacement for Christie in a late throw of the dice to turn the game in Celtic’s favour and there was an opportunity when Edouard attempted to get onto a right-wing cross from Weah, but keeper Kelly managed to race from his line to kick clear.

And then came the horrendous miss from Burke and that was the end of the story.

Better days are ahead.