Celtic Quick News on News Now
You are at:Home»Match Report»CELTIC PUT MINIS TO THE SWORD, BUT DONCASTER IS A FLAG DAY NO SHOW
By CQN Magazine on 5th August 2017 Match Report

CELTIC 4 HEARTS 1
CELTIC strode purposefully and powerfully into the new Premiership campaign with all guns blazing as they zero in on their seventh successive title.

Scott Brown was given the honour of unfurling the Premiership Flag, Celtic’s sixth in a row, but SPFL Chief Executive Neil Doncaster didn’t have the nerve to show his face on the park. Maybe he was busy watching the athletics were medals were being issued to athletes who had previously lost out to cheats. 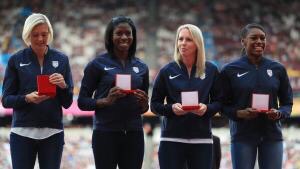 Hearts were decimated long before the end following a double strike from Leigh Griffiths and singles supplied by Scotty Sinclair and Callum McGregor at a colourful, bouncing Parkhead this afternoon.

The Esmael Goncalves consolation goal six minutes from time will be re-examined by perfectionist Brendan Rodgers, you can be sure of that.

However, this was a day for celebration from a team that could well live up to their Invincible tag from last season.

Once skipper supreme Scott Brown got the flag-unfurling duty out of the way, the Hoops set their sights on title number seven on the trot.

Rodgers started with the precise and tidy Olivier Ntcham in for Stuart Armstrong and it didn’t take long for the champions to get into their elegant stride as they focused on the Hearts goal.

They could have been ahead early on when Nir Bitton, all alone at the far post, looked poised to bury a header beyond the flapping Jack Hamilton as a right-wing corner-kick was whipped in from the right by Griffiths.

Unfortunately, the Israeli skyscraper, playing alongside Jozo Simunov in the centre of the defence, got his angles all wrong and harmlessly nodded well wide of the post.

Kyle Lafferty, rampaging around with all the finesse of a rogue elephant with toothache, was attracting attention for all the wrong reasons, a familiar occurrence for the Northern Ireland frontman in this part of Glasgow.

He was involved in three dodgy challenges in the opening 10 minutes and was most fortunate lenient referee Kevin Clancy decided to keep his cards in his pocket – for the time being, at least.

In the 23rd minute, Griffiths showed some mesmerising skills as he came in from the left to leave two defenders in his slipstream.

He rattled in a shot that Hamilton managed to claw away and it was heading straight for McGregor until Christophe Berra launched a clearance for a corner-kick.

Two minutes later with the pressure mounting, Brown and Sinclair combined to leave Griffiths sprinting clear into the box.

You would have put your mortgage on the striker bulging the net behind Hamilton, but, unusually, he lost his composure at the crucial moment and thumped the ball wildly off target.

However, in the 29th minute normal service was resumed when the international hitman scored the Hoops’ first league goal of the campaign.

Its design was deliciously simple and exquisitely finished. Bitton sliced open the Hearts back lot with a probing long pass that dropped perfectly for Griffiths.

The outrushing Hamilton got a touch, but the pacy attacker quickly brought the ball under control, switched it from left to right and knocked it into the inviting net.

Two minutes later, it was inevitable Lafferty, a bull in search of a china shop, was yellow-carded by the ref after clattering clumsily into Bitton from behind.

Clancy had booked Brown for a challenge on Arnaud Djoum just beforehand and could not look the other way on this occasion.

In the 39th minute, Celtic came close to doubling their advantage when Simunovic stabbed a Griffiths corner-kick in front of James Forrest.

He twisted and turned, took the ball to his left foot, but Hamilton bundled his shot past the post.

A minute from the interval, Hearts’ Michael Smith was next to go into the book for a blatant tug of Griffiths’ shirt.

It took the Scottish kings only six minutes after the break to add a second goal.

Once again, Griffiths created alarm in the visitors’ defence with his accuracy from a set-play, Aaron Hughes missed with a hasty swipe and the ball dropped to Sinclair who neatly prodded home from four yards.

McGregor was eager to get in on the goalscoring act and had two quickfire powerful efforts to test the Hearts rearguard. The first was fisted away by Hamilton and the second zipped just wide of the right-hand post.

In the 63rd minute, number three was duly delivered and it was Griffiths who provided the killer touch to an excellent move.

Brown slid in McGregor on the right. His ball across was poetry in motion and Griffiths came thundering in at speed to get his head to the ball to send it rocketing into the net.

Three minute afterwards, the striker went off to a standing ovation with Jonny Hayes coming on in his place.

Minutes later, Polish defender Rafal Grzelak was next to go into the book for a foul on Bitton.

Lafferty was fortunate not to see red in the 69th minute when he deliberately jumped into Tierney as they went for a high ball.

The match official turned a blind eye to the obvious foul and caretaker boss Jon Daly, sensing his player had lost the plot, withdrew him only moments later to send on Connor Sammon.

There was no way Lafferty was going to finish the 90 minutes at Parkhead this afternoon, one way or another.

In the 73rd minute, McGregor got the goal he deserved when he lashed an explosive left-foot effort high into the net after a superb turn from Sinclair on the halfway line that left his marker Jamie Brandon for dead.

The English attacker drew three Edinburgh defenders to him before he passed inside for the midfielder and he made no mistake with a brilliantly-struck effort.

Two minutes later, McGregor also went off to the applause of the fans with Tom Rogic coming on and Armstrong also replaced Ntcham near the end.

The Hearts goal will undoubtedly irk Rodgers and his defence, especially Simunovic and Craig Gordon.

A simple ball down the right wing suddenly created havoc in the Hoops rearguard, the centre-half mistimed his tackle, Goncalves carried on and struck a powerful angled shot low to the keeper’s left-hand post.

Gordon, who appeared to go early to his right, allowed the effort to slam off his legs and ricochet high into the net.

Rodgers will have words to say about conceding a cheap goal, but, overall, the Celtic manager is bound to be satisfied with his team’s composure and quality as they eased over the first league hurdle of the season.