CELTIC have been hit by a paltry £4,000 SFA fine over the conduct of their players following a controversial penalty-kick decision in the holders’ 2-1 Scottish Cup victory over Partick Thistle last month.

TV pictures proved conclusively the Dutch teenager had raced back to put in a legal tackle to prevent the Maryhill outfit scoring a consolation effort with the Hoops already two goals ahead with strikes from Leigh Griffiths and Callum McGregor.

PENALTY – WHAT PENALTY? Jeremie Frimpong clearly prevents Dario Zanatta a scoring chance with a timely intervention as ref Alan Muir gets a clear view of the incident. 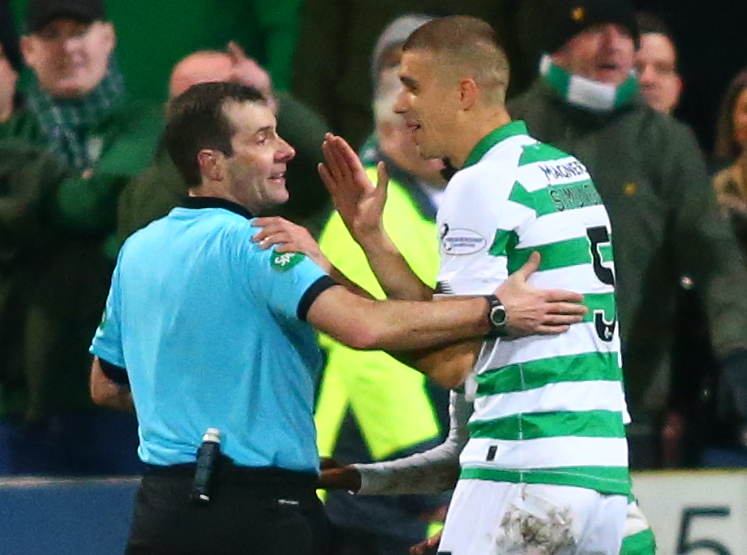 ON THE SPOT…Jozo Simunovic pleads with the match official to think again about his decision that gifted Thistle a consolation goal.

Frimpong was erroneously booked by Muir and Stuart Brannigan netted from the award to put a better complexion on the scoreline.

The Hoops players protested at the match official’s bewildering decision, but the incident passed without mention.

Neil Lennon’s men had been aggrieved in the first-half when Muir denied them what looked like a stonewaller when Thistle left-back James Penrice pushed over Frimpong in the box to send him toppling after the teenager had sped past him.

Astonishingly, the whistler turned a blind eye to the blatant incident which mystified onlookers – as did his later decision to award the Jags a spot-kick.