RYAN CHRISTIE’S X-ray showed no fracture to the leg injury that saw him stretchered off in the 2-1 Europa League defeat against RB Salzburg on Thursday night.

The in-form Celtic midfielder was in obvious distress following a block challenge on an Austrian forward in the second-half and had to be assisted by the medics as he left the field.

He was seen in a leg brace at Parkhead later in the evening, but it is not known how long he will be on the sidelines.

Hoops boss Brendan Rodgers said: “It looked a sore one. Ryan’s a huge loss to us, but we will assess it and see how the damage is in the next couple of days. 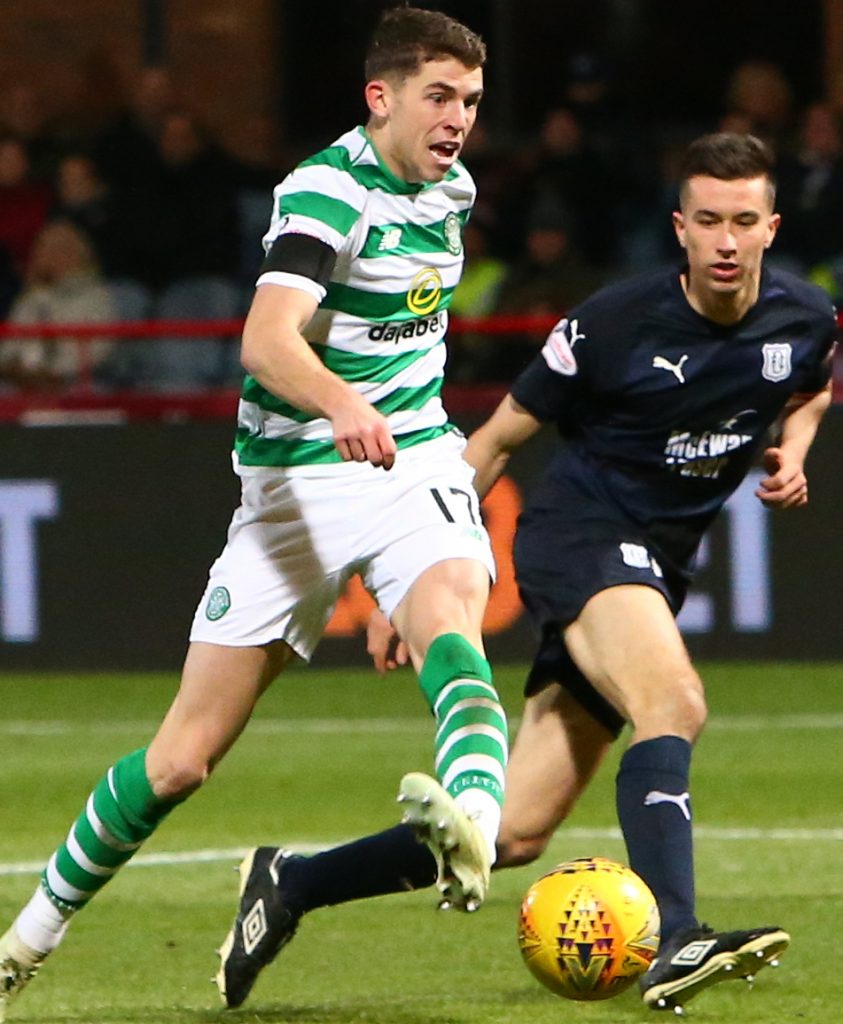 WALLOP…Ryan Christie scores with a first-time effort in the 5-0 win at Dundee in October. Pic: Geo.

Swedish international defender Mikael Lustig was forced to leave the pitch early in the first-half following a clash of heads and was replaced by Kristoffer Ajer.

It was the young Norwegian’s first appearance since his horrific fractured eye-socket injury against Livingston last month.

On Lustig, Rodgers added: “I think he was just a bit dizzy. He felt he could play on, but was a little bit dizzy.

”We will just assess it. The players have put in a huge effort for a long time now and we still have 20 games left.

“But getting through to the Europa League knock-out stages is a huge lift for us. It’s a great achievement and the players will feel confident.

“We don’t feel like celebrating because we lost the game, but the bigger picture was we got through. I’m really pleased about that.”

Ajer is standing by to take over from Lustig once more against Hibs at Easter Road tomorrow afternoon. It’s bound to be another hard-fought encounter against Neil lennon’s side in Edinburgh where the champions dropped five points in the last campaign, a 2-2 draw and a 2-1 defeat.