Celtic Quick News on News Now
You are at:Home»Latest News»COLE RETURNS TO ENGLAND – FOR NOW
By CQN Magazine on 8th March 2016 Latest News

VETERAN striker Carlton Cole has been given time off by Celtic for personal reasons.

The former England international has been absent from the club’s Lennoxtown training base for the past fortnight and has been allowed to travel back south. 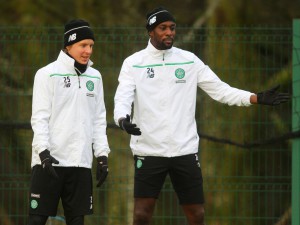 A club source says the player will be back in Glasgow soon and has given Ronny Deila a fixed date for his return. Cole has made only one start and four substitute appearances for the champions since signing an 18-month deal in October

The ex-Chelsea frontman, who was released by West Ham in the summer, had his last Hoops outing after replacing Leigh Griffiths in the 8-1 victory over Hamilton on January 19.

Cole was named on the bench for the Premiership loss to Aberdeen on February 3, but didn’t get on. He later played in a development fixture against Motherwell two days later.

The 32-year-old’s only goal came during the 3-0 Scottish Cup win over Stranraer at Stair Park.