Celtic Quick News on News Now
You are at:Home»Latest News»COLLINS SALUTES GRIFFITHS
By CQN Magazine on 12th May 2016 Latest News

JOHN COLLINS has backed Leigh Griffiths to kick on and continue his remarkable scoring run for Celtic in the new season.
The striker’s landmark 40th goal of the campaign was the only bright spot on a disappointing night for the champions as they gifted St Johnstone a 2-1 win with two disastrous defensive errors. 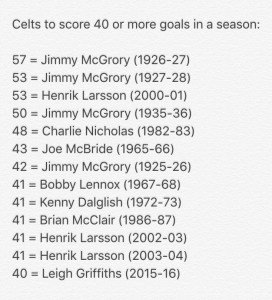 But Hoops No.2 Collins, who will leave the club with manager Ronny Deila after Sunday’s final league game against Motherwell at Parkhead, is convinced Griffiths will pick up next term where he left off in this one.
He said: “You have to say 40 goals is a very high standard, not too many strikers score 40 goals.

“Leigh should be proud of it and you could tell he enjoyed it.

“That is him finished for the season, he misses the game at the weekend, but he will be back next season terrorising Scottish defenders, no doubt.”

It is just as well Griffiths has scored an avalanche of goals this time around – amazingly, no other Celtic player hit double figures in the campaign.
Kris Commons and Tom Rogic claimed nine and Nir Bitton hit eight.
There are those who can remember Tommy Gemmell being disappointed at the end of the season if he didn’t hit at least 10 – and the Lisbon Lion was a left-back!