SCOTT BROWN and Emilio Izaguirre are the only survivors from the 18-man squad the last time Neil Lennon managed a Celtic team against Rangers seven years ago.

The former Scotland international midfielder, 33, and the Honduran left-back celebrated as the champions routed Ally McCoist’s team 3-0 at Parkhead on April 29, 2012.

Lennon saw his side go two ahead by the 31st minute with goals from Charlie Mulgrew and Kris Commons while a thunderbolt from Gary Hooper nine minutes after the turnaround made certain of victory. 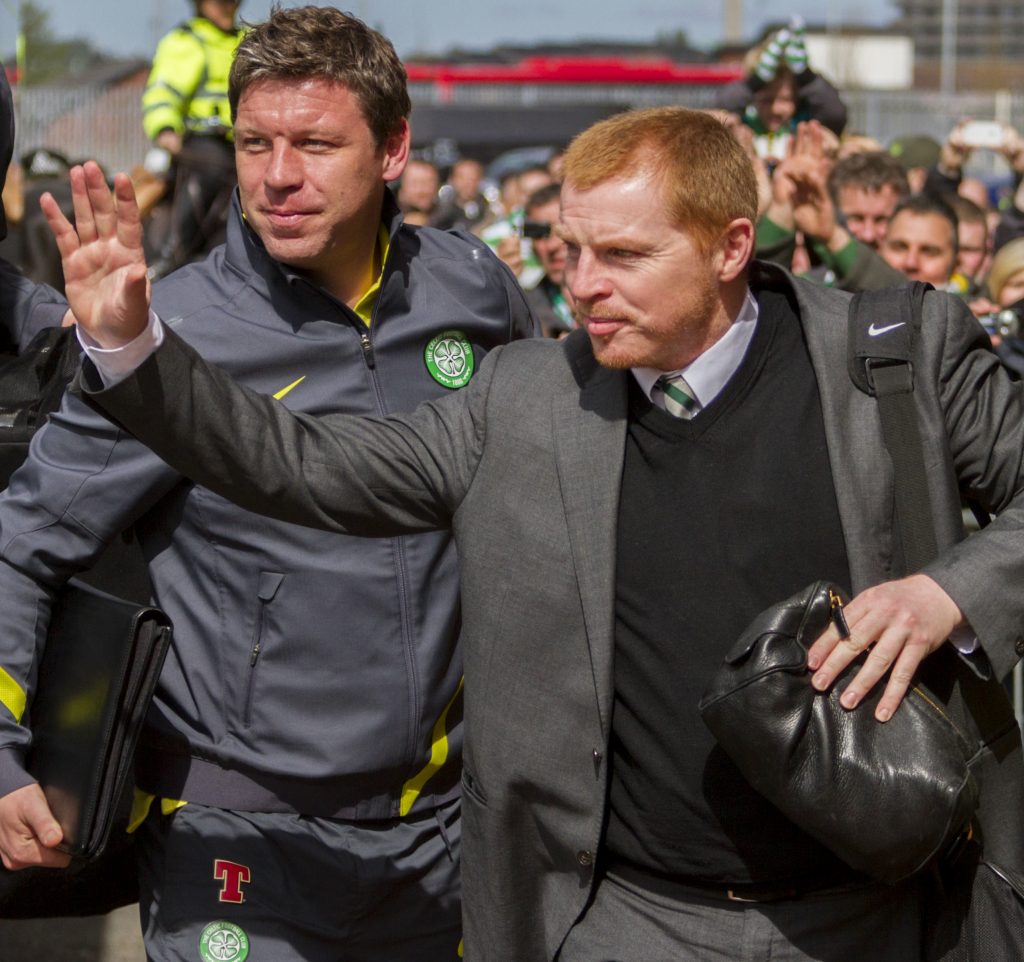 Lennon won three titles and two Scottish Cup in charge of the team before leaving in May 2014 and taking over at Bolton five months later. He left the troubled Championship outfit in March 2016 by “mutual consent” and was named Hibs Head Coach in June the same year.

The Northern Irishman was suspended by the Edinburgh club on January 25 this year and left five days later. He took over as interim gaffer at his old club on February 26 following Brendan Rodgers’ swift departure to Leicester City.

There have been a few changes in fortunes, too, for the Hoops players on view against Gers in 2012.

In another big-game EXCLUSIVE, CQN looks back at the joyous occasion in the east end of Glasgow and asks: Where are they now?

Cost a bargain £2m when he joined from Newcastle in June 2012 after two successful seasons on loan. Moved to Southampton in August 2014 for £10m. The 6ft 6in keeper, 31, has won six England international caps, but is now third-choice at the Premier League outfit club behind Alex McCarthy and Angus Gunn.

The Welsh international right-back arrived from Cardiff City in July 2011 after agreeing a pre-contract in January. Former Rangers boss Dick Advocaat paid £2m to take him to Sunderland in July 2015. Davie Moyes, who replaced the Dutchman, allowed Matthews to go on loan to Bristol City in 2016. The 27-year-old defender agreed a second stint at Ashton Gate and is now back at the Wearsiders in League One. 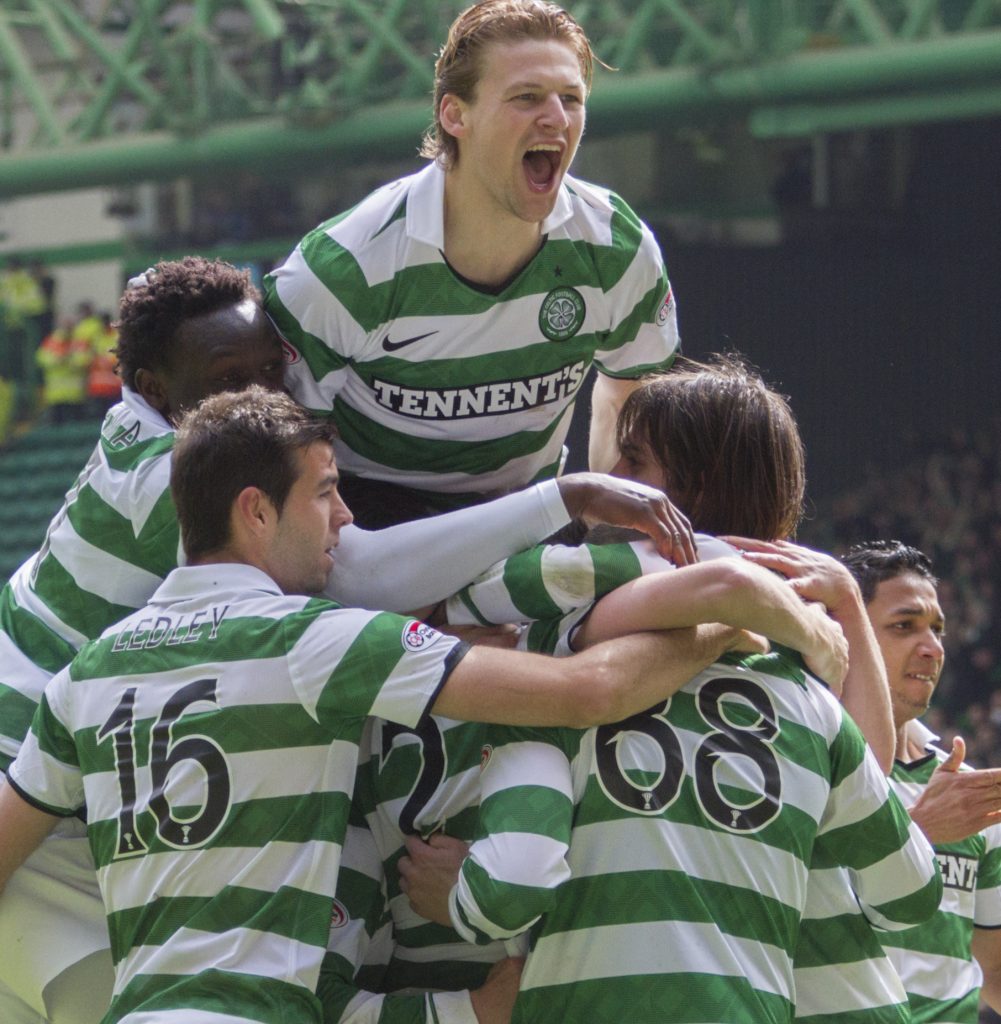 HOOP HOOP HOORAY…Glenn Loovens joins the happy Celtic players as they celebrate a goal against Ally McCoist’s men in the runaway triumph.

The Dutch central defender, now 35, also arrived from the Welsh outfit, bought by Gordon Strachan for £2.1m in August 2008. He left four years later at the end of his contract for Spanish outfit Real Zaragoza before joining Sheffield Wednesday on a free in December 2013. He moved to Sunderland for £500,000 last summer.    . 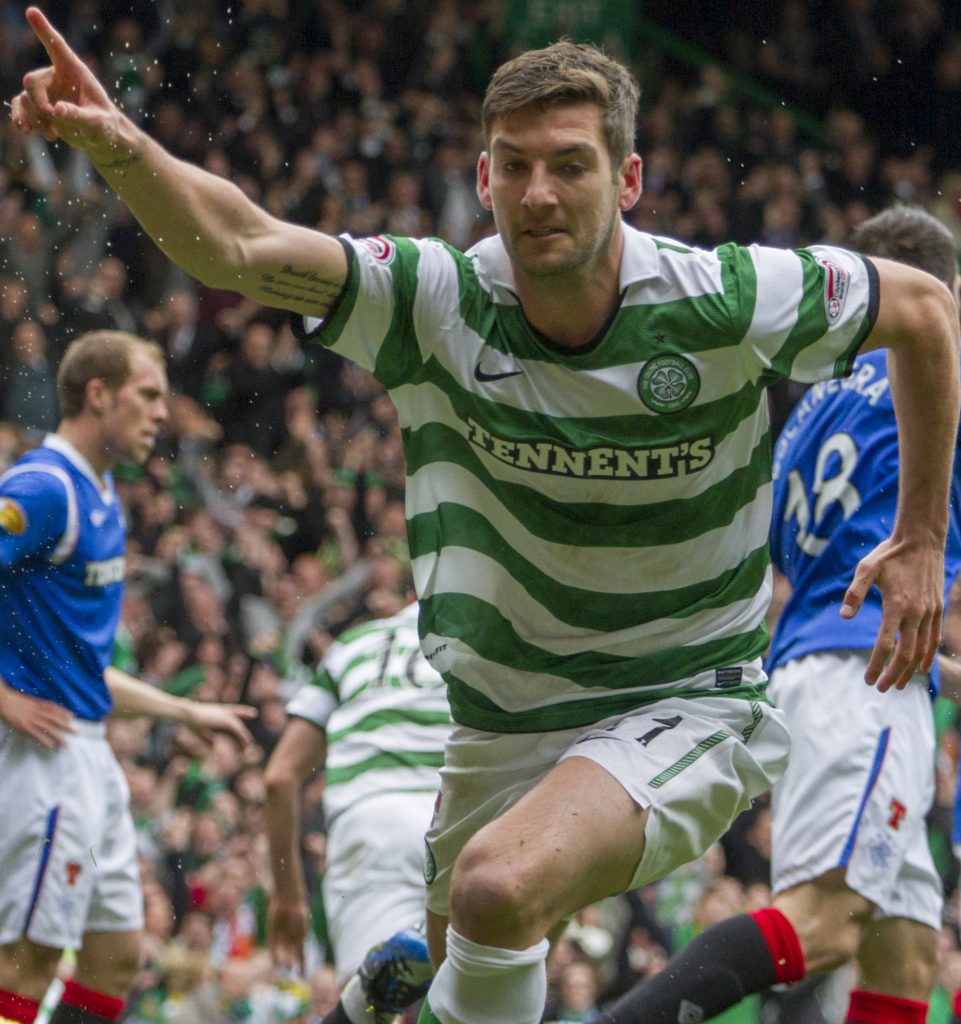 SWEET FOR OPENERS…Charlie Mulgrew runs away after netting the first goal.

Started the three-goal romp against the Ibrox men with a diving header. Kicked off his career at Parkhead in 2002 and had a loan stint at Dundee United in 2006. He moved to Wolves in part-exchange for Lee Naylor later that year before shifting to Aberdeen in 2008. He rejoined the Hoops in July 2010. Out of contract four years later, he was snapped up by ex-Hoops gaffer Tony Mowbray for Blackburn Rovers where the 33-year-old defender is currently captain of the Championship side. 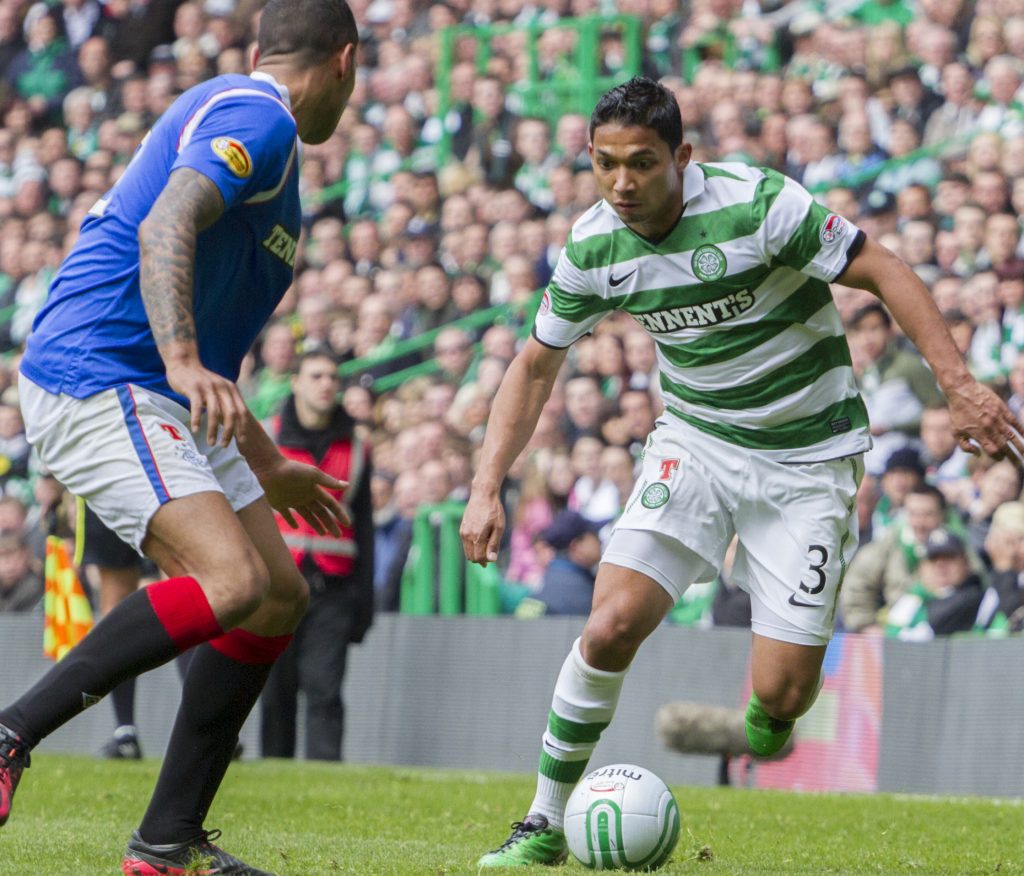 ON THE RUN…Emilio Izaguirre prepares to race past Kyle Bartley.

Another Lennon purchase, the 32-year-old attack-minded left-sided defender arrived from local team Motagua in a £675,000 switch in August 2010. He left at the end of his contract seven years later and had a season-long hiatus with Saudia Arabian club Al-Fayha before returning as a free agent last summer. His current deal expires in June and is likely to be on his way for a second time.

The skipper cost a record fee of £4.4million between two Scottish sides when Strachan bought him from Hibs in August 2007. The dynamo has won 17 honours with the Hoops and also a League Cup with the Edinburgh outfit. Capped 55 times by Scotland, he agreed a new two-year extension this season. 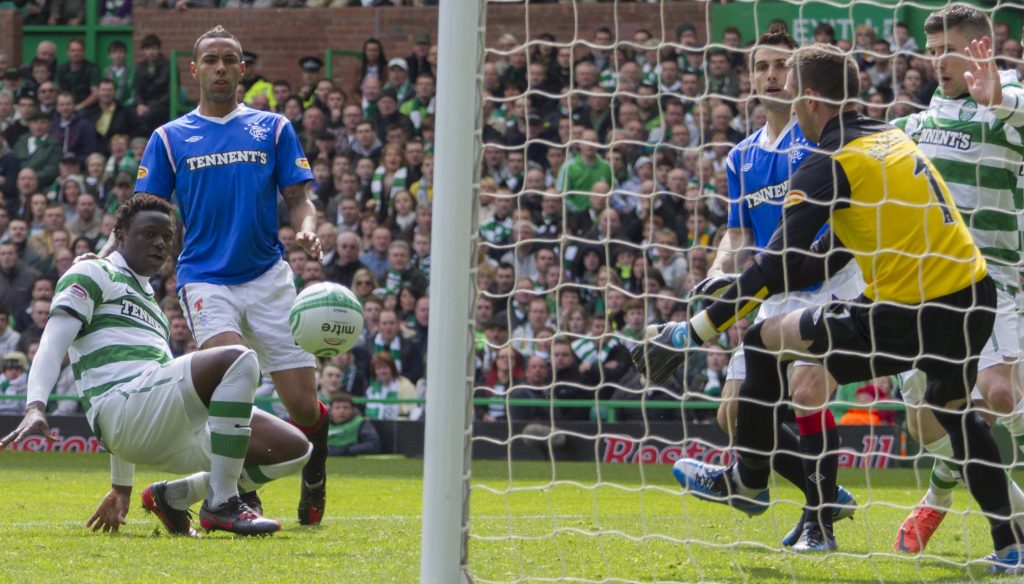 NOT THIS TIME…Victor Wanyama and Gary Hooper put pressure on goalkeeper Allan McGregor and his defence.

A bargain £800,000 purchase from Belgian outfit Beerschot AC in July 2011. The 27-year-old Kenyan international powerhouse became a firm favourite of the Hoops fans and will be forever remembered for his header in the 2-1 Champions League triumph over Barcelona in November 2012. Moved to Southampton for £13m in July 2013 before transferring to Spurs for a similar fee three years later.

The Welsh international midfielder joined for £2.1m from Cardiff City in July 2010. Moved to Crystal Palace for £900,000 in January 2014 as he neared the end of his Hoops contract. Now 32, he is a free agent after leaving Derby County in January. 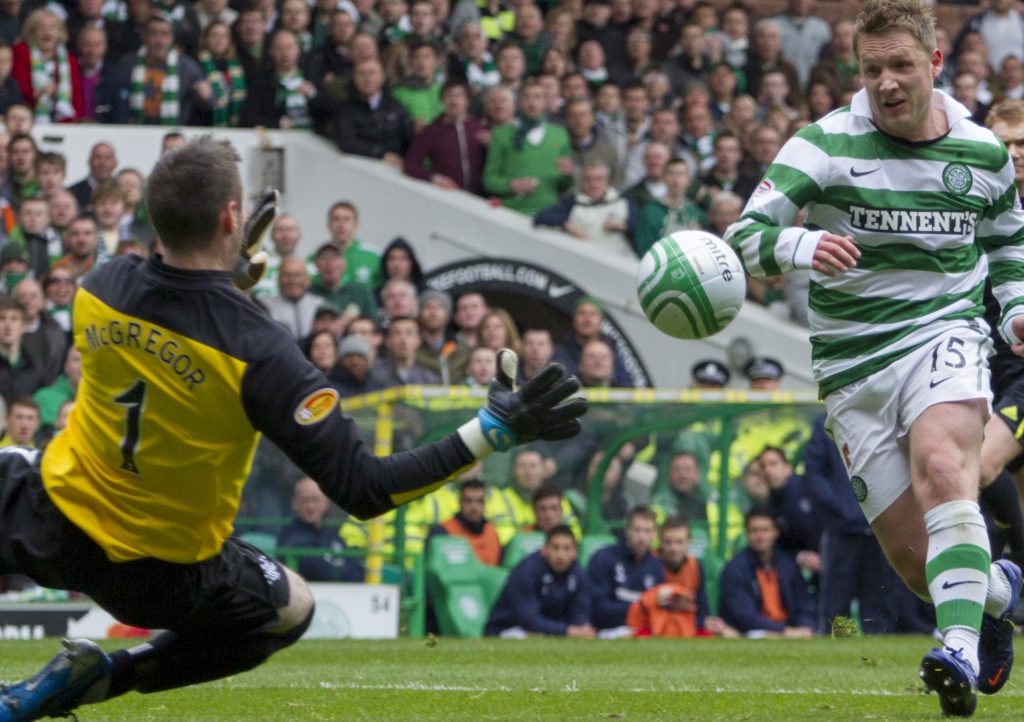 BY THE LEFT…Kris Commons flicks No.2 beyond the stranded Allan McGregor.

Bought for a cut-price £300,000 from Derby County in January 2011, the ex-Scotland midfielder became another extremely popular Celtic performer. Didn’t play a solitary first team game following the arrival of Brendan Rodgers in May 2016 and, after a short stint on loan at Hibs, retired last summer. Now 35, a media pundit.

BY THE RIGHT…Gary Hooper wallops in the third goal with Carlos Bocanegra geeting a good view.

A virtual unknown when Lennon paid £2.4m to take him from Scunthorpe in July 2010. Scored 63 league goals goals in three seasons, including the killer third against Gers seven years ago. Moved to Norwich City for £5m and, after a loan period, the 31-year-old is now at Sheffield Wednesday following a £2.5m deal in January 2016.

Retired from football last October at the age of 34 after a short stint at Turkish club Samsunspor. Had a loan period at Parkhead before Strachan paid £2.25m to land him on a permanent deal from Manchester City in July 2008. He moved to West Brom on a free six years later and left the Hawthorns after having his contract scrapped. Had a stint in the States with Rayo OKC before moving to Spain with Real Zaragoza and then onto Turkey. 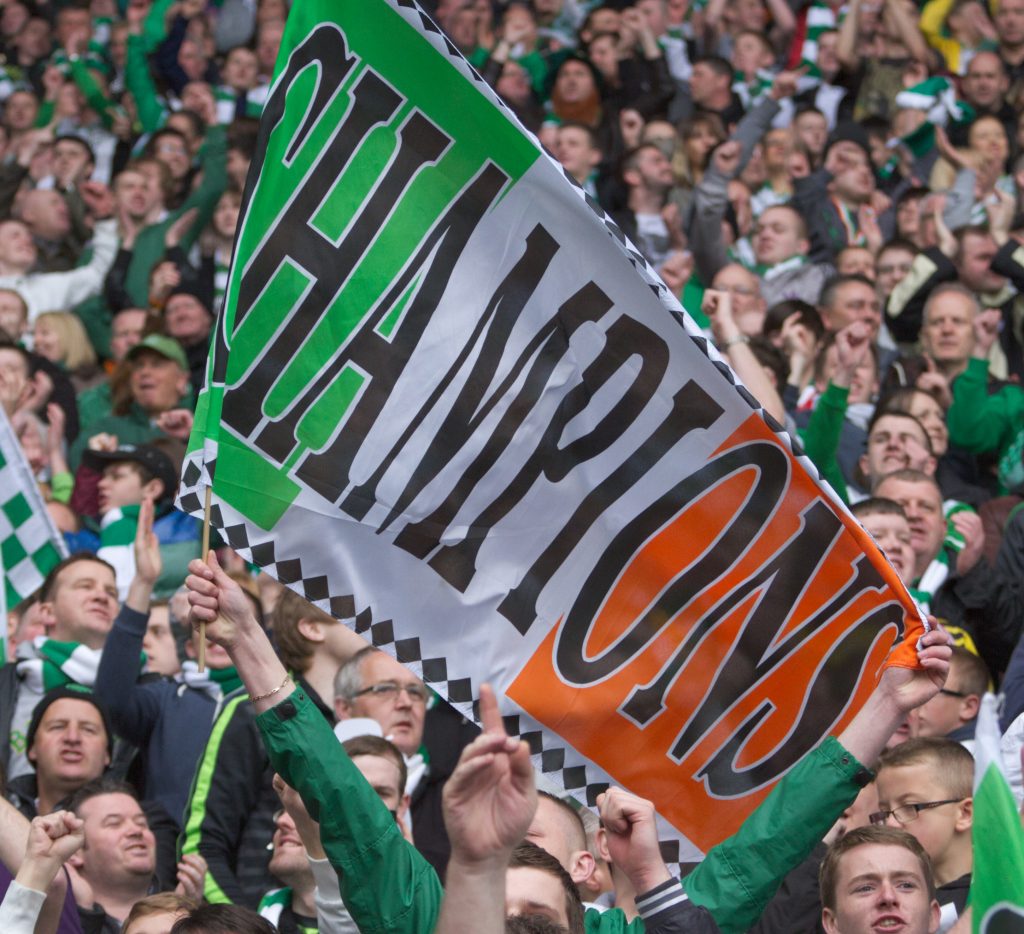 FLAG HAPPY…the picture that says it all.

The Republic of Ireland frontman, 30, who replaced Samaras in the 81st minute, joined the Hoops from Hibs in August 2010 and was loaned back to the Edinburgh team in 2018 where he scored two goals in the club’s 3-2 Scottish Cup Final win over Rangers. He joined Blackburn Rovers the following June and the contract was terminated a year later. He had a third spell at Easter Road when he joined in August 2017, but was released by Lennon in January the following year. He had a disastrous two-month spell with Greek side Apollon Smyrni after signing in February 2018 and joined Iranian side Tractor Sazi in June last year.

The man known as “The Derry Pele” came on for Commons in the 85th minute. He arrived at his boyhood favourites in June 2008 from Derry City. He left in June 2013 following 10 goals in 88 appearances. The 19-times capped Northern Ireland winger joined Barnsley in August 2013 before switching to Brighton a year later and he also had a spell on loan at Notts County before his travels took him to Luton, Glenavon and Finn Harps. He retired at the age of 35 last season.

Another goal hero against Lionel Messi and Co with the winner, he made an 89th-minute appearance for Hooper. The 25-year-old striker joined the Parkhead men in an £80,000 move from Airdrie in January 2011 and had a spell on loan at Belgian outfit Lierse before quitting the Hoops in a £1.2m deal in July 2014 for Standard Liege. He shifted to Charlton in January 2015 and had loan spells at Cardiff City, Blackburn and Hearts before signing for another Belgian team, OH Leuven in August 2017. His now at St Johnstone after agreeing a contract in July last year.