JAMES FORREST insists Celtic will be full throttle when they play Rennes in the Europa League Group E encounter at Parkhead on Thursday night.

Neil Lennon’s men have, of course, already booked their place in the competition’s knock-out stages next year following their remarkable 2-1 triumph over Lazio in Rome, the team’s first win on Italian soil in 13 attempts.

The Hoops are top of the section following three victories and a draw – the 1-1 stalemate in France that kicked off the adventure in September.

Since then they have beaten the Romanians of Cluj and the Serie A cracks twice in two memorable confrontations.

The club have played 15 times in the group stages of the Champions League or the second-tier tourney in 18 years – but they’ve never yet topped their section.

The Scotland winger, who hoisted his goal tally to 13 with a double strike against Livingston at the weekend, admits they will never have a better chance.

Lennon’s men could seal it this week if Lazio beat Cluj – and the rewards in the last 32 are potentially huge. 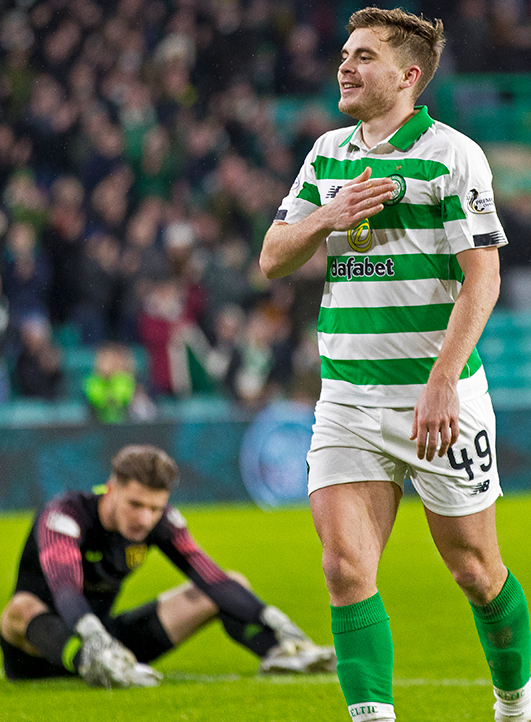 GOALDEN BHOY…James Forrest looks delighted after his second strike in the 4-0 win over Livingston.

Forrest, speaking to the Daily Record, said: “We’d rather top the group. To be fair, whoever we get in the next round, it’ll be a hard game – but maybe you get a more favourable draw if you finish first.

“The last couple of years we’ve had some hard teams like Zenit and Valencia.

“The fans will fill the stadium again on Thursday, so we want to keep the momentum going for the next round in February.”

Forrest, 28, added: “I’ve had a few good experiences at home in Europe, but, for an away game, that night in Rome was definitely one of my best.

“The feeling in the changing room, the reaction of the fans – it was an incredible night.

“And we have to be positive about it. Lazio are sitting third in Serie A just now and we came away with two wins. It just makes the boys want more.”

If Lazio take points off Cluj on Thursday night, then a win for Celtic would guarantees top spot with a game in Romania to spare.