CELTIC took care of Kalju in Estonia this evening and will now turn their attention to Cluj in Romania a week tomorrow.

Neil Lennon’s side produced a thoroughly professional performance to ease into the third stage of the Champions League qualifying round and the first leg is away from home against opponents who overcame the Israelis of Maccabi Tel Aviv 3-2 on aggregate after a 2-2 stalemate tonight.

The riches of Europe’s elite competition edged closer in Tallin as £7million centre-back Christopher Jullien made his competitive debut and looked composed as he teamed up alongside Jozo Simunovic.

And another new Celt, £2million winger Maryan Shved, celebrated his introduction to proceedings with a second goal in stoppage-time with a sweet left-foot effort from 18 yards that sizzled into the roof of the net.

Job done and a winning start for the new faces on an evening when the players enjoyed a good European work-out ahead of the real test. 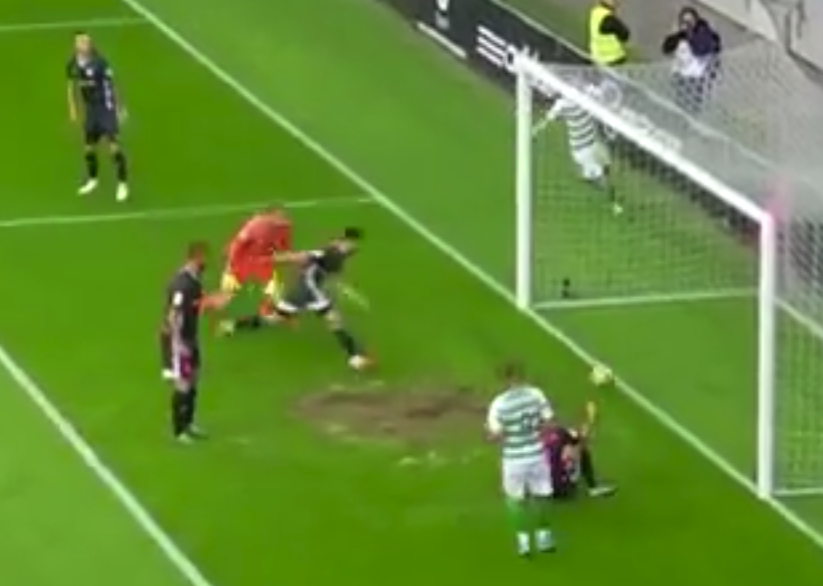 OG! Leigh Griffiths get a close-up view of the opening goal as it goes in off a Kalju defender.

Lennon no doubt will have some things to say, possibly the lack of shots on target, but in the end he must be reasonably satisfied with seven goals scored, none conceded and a place in the next round.

The Hoops demonstrated their intent inside the opening minute when Lewis Morgan latched onto a ball from Olivier Ntcham, but the winger’s effort was just off target.

In the 10th minute the five-goal advantage was extended by one when it looked as though Leigh Griffiths had scored a simple tap-in at the far post after some nice lead-up play on the left from Boli Bolingoli, Ntcham and Mikey Johnston.

The livewire winger got free of the home defence to sweep a low pass beyond keeper Pavel Londak and the comeback Bhoy didn’t get the best of touches and it took a nick off defender Aleksandr Kulinits before it crossed the line. It didn’t stop Griffiths from taking the congratulations from his team-mates, but the final touch came off the Estonian and he was officially “awarded” the goal. 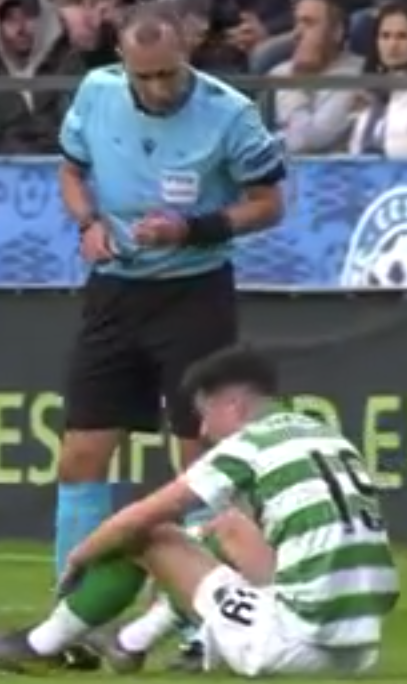 IN THE WARS…Mikey Johnston sits it out after a severe challenge as the ref looks on.

Johnston went down in the 17th minute following a heavy challenge when it looked as though he had been struck in the face by the head of an opponent, but, thankfully, the youngster was able to resume.

Moments later, Johnston was fouled again and this time the referee produced a yellow card. It was Griffiths’ turn to be sent spinning in the 24th minute after he showed some fine control before a cynical challenge took him out of play. He, too, returned to action after treatment on the touchline.

Ntcham, following his unfortunate comments while on French Under-21 duty in the summer, looked eager to show some form and he was linking up well with Johnston on the left and displayed an excellent range of passing with a ball spread to the right to pick out Anthony Ralston.

In the 41st minute, Johnston snapped onto a loose pass on the edge of the box, but the flanker snatched at the opportunity and waywardly blazed the ball over the bar.

Craig Gordon, playing his first competitive game of 2019, had little to do in a one-sided opening half, but he showed his concentration levels were still on full alert as he dealt well with a spinning cross from the left that struck Ralston on its way into the box. The keeper kept his eye on the ball and claimed it calmly under the crossbar. 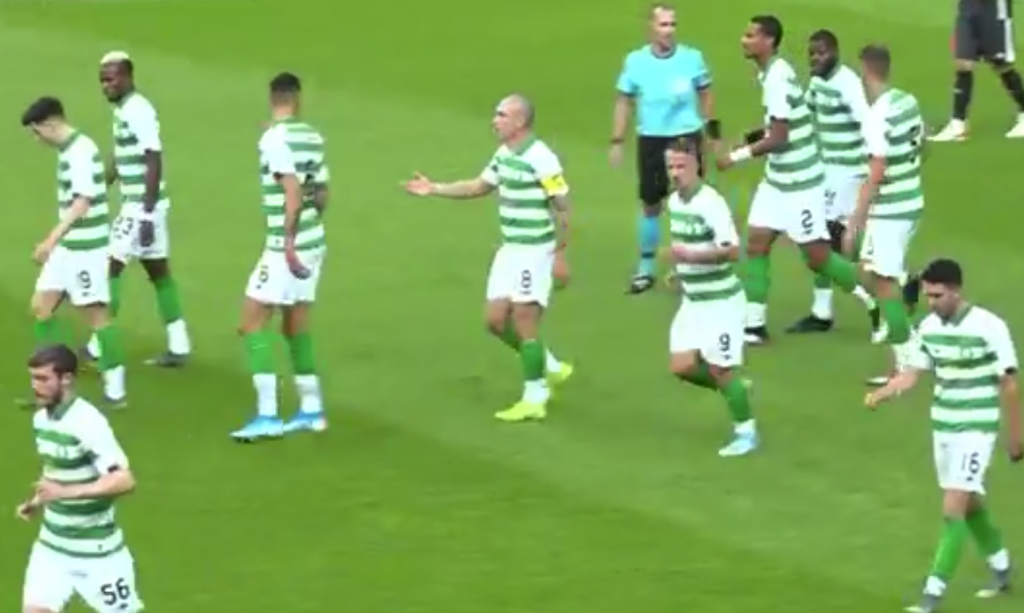 HAIL! HAIL! THE GANG’S ALL HERE…well, almost. The Celtic players celebrate the first goal, but keeper Craig Gordon misses out.

Shortly after the turnaround, Ntcham attempted an ambitious curling effort from 20 yards following a left-wing corner-kick. The ball dipped and swerved and just cleared the crossbar with Londak scrambling across his line.

In the 54th minute, Gordon made a solid block from a raging angled drive from Kaspar Paur and Julliien tidied up as the ball bounced back into play.

Five minutes later, Jullien missed the opportunity to open his scoring account when Griffiths flighted in a perfect free-kick from the right. The towering Frenchman bustled into the box to get his head to the ball, but his elevation let him down and his header carried high over the target.

On the hour mark, Lennon introduced Scott Sinclair for Johnston as the game settled down with the visitors in control and Scott Brown putting in his usual competent performance as he flitted effortlessly across the midline.

Bolingoli almost got on the end of a cute pass from Ntcham as the keeper raced to take possession and only moments later Gordon pushed away a drive from Paur at his near post for a corner-kick.

DEBUT DAZZLER…Maryan Shved fires in the second goal from the edge of the box. 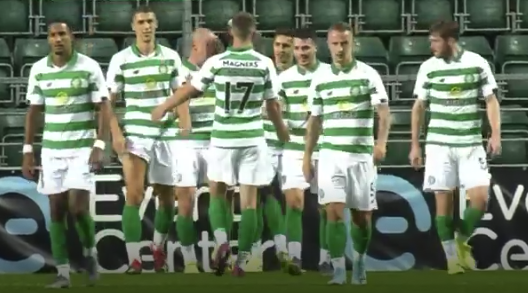 Within a minute the new Bhoy almost marked the occasion with a goal as he raced onto a pass from Morgan, but Londak got down well to his right to push the drive away for a corner-kick.

Six minutes from time, Ntcham, who had played well, came off to be replaced by Ryan Christie as the Hoops eased towards a third hurdle against Dan Petrescu’s Cluj.

Shved was not to be denied, though, when he netted a stunning second goal with a blistering left-foot drive that hurtled high into net beyond the heroic Londak in stoppage time.