Celtic Quick News on News Now
You are at:Home»Latest News»LENNY LAUDS LAXALT: ‘COULD WE KEEP HIM BEYOND HIS LOAN?’
By CQN Magazine on 1st November 2020 Latest News

DIEGO LAXALT has played only four games for Celtic since arriving on loan from AC Milan – and he is still waiting for his first win.

The Uruguayan left-back answered the SOS last month to add competition to the No.3 slot to Greg Taylor after blundering Boli Bolingoli was packed off on a temporary switch to Turkey.

Laxalt has seen the Hoops lose to Steven Gerrard’s Ibrox outfit and his parent Serie A club while achieving draws at Aberdeen and Lille and he is a certain starter in today’s delayed Scottish Cup semi-final against the Dons at Hampden with the Parkhead men on the brink of an astonishing quadruple treble.

After a mere six hours of action, there are already noises for the club to snap up the defender on a permanent deal.

Neil Lennon doesn’t dismiss the notion and, speaking to the Sunday Mail, said: “Could we keep him beyond his loan? It’s early days.

“But, listen, when you’ve got a player like that it will probably come down to having a discussion with him.

“He’s a player I’ve admired for a long time and he’s proven everything that I thought about him to be true. I watched him a lot and I have always liked his style.

“Going forward, he gives us good pace and thrust – but he also likes to defend.

“His positioning and football intelligence are really high. I think we’ll see even more of him when he gets accustomed to the culture and the language.

“But so far he’s adapted brilliantly in the games” 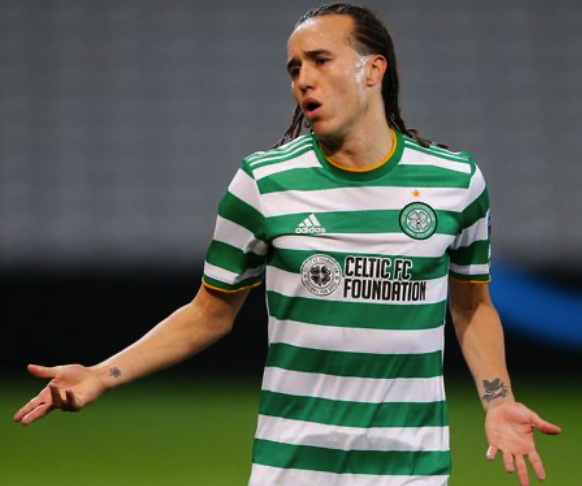 Laxalt, 27, made 13 successful tackles in Thursday’s 2-2 Europa League Group H stalemate against Lille in France – the most by any player in a Europa League game for six years.

Lennon commented: “Diego has been outstanding from the moment he came through the door.

“He doesn’t speak much English, but you don’t have to tell him too much or give him too many instructions.

“He knows the game, he understands his position and when I watched him, I felt he’d add a lot of quality to our play.

“Diego has been an excellent addition, a superb asset to the squad. He’s very fit and he’s a great defender. He gives us good balance on the left.

“He’s aggressive in his play and in his passing. I’ve been absolutely delighted with him so far.

“He hasn’t been on a winning team yet, so he’s getting a bit of stick about that from the boys.

“But his performances have been fantastic and he will only get better. He’s enjoying it here and we’re enjoying him. He was brilliant against Lille, who are quality opposition.”

The Hoops gaffer also believes the arrival of the player who cost AC Milan £12million when he joned from Genoa in 2018 will help spur Greg Taylor.

He added: “Greg will learn a lot from Diego and vice-versa – hopefully, they can bounce off each other.

“Greg’s an excellent young talent, so we’ve two very good left-sided players now in that position who can push each other on.

“Greg will play his part this season, as well, there’s no question about that.”