BRENDAN RODGERS admits he has no concerns of collusion between RB Salzburg and RB Leipzig in the club’s bid to qualify from Europa League Group B to ensure European football next year.

The Austrian and German clubs are both backed by the Red Bull franchise and will meet on November 29, the same evening Celtic travel to Trondheim to face Rosenborg.

Rodgers masterminded the 2-1 victory over the Bundesliga big-spenders at a pulsating Parkhead on Thursday night and the teams are now level on six points.

The Hoops must better Leipzig’s points tally from the remaining two games to make the last 32.

Despite having already earned a perfect 12 points from four outings, Salzburg still need one more against Leipzig in Austria.

Any talk of a carve-up between the clubs to ensure both go through is dismissed out of hand by Rodgers. 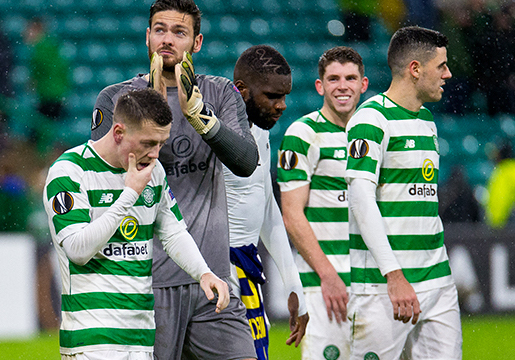 He insisted: “No. I would never question the integrity of it. Both teams have pride.

“You saw it in the first game. Both teams want to win. Salzburg are a very good side. They have shown that against Leipzig and in their game on Thursday night. Both teams will want to win that.

“The group is a very tough group. You see the level of the two teams that are there plus Rosenborg. So, it will be a fight, hopefully, right to the end for us.”

Salzburg have already beaten their Red Bull stablemates 3-2 in Germany and a repeat will open the door for Celtic – if they succeed in Norway.

They settled for a goalless draw in the Champions League qualifier in August to go through to the next stage on a 3-1 aggregate.

And, of course, James Forrest was on target in Trondheim the previous season to help the Hoops make progress in Europe.

Rodgers’ men complete their group games with a meeting against Salzburg in Glasgow on December 13.

What a night that could be under the lights in the east end of Glasgow!