OLIVIER NTCHAM faces a grilling from an angry Neil Lennon when he returns to Celtic after international duty with France in the European Under-21 Championships.

The Hoops boss has declared he is “not satisfied” with comments made by the midfielder, as reported in CQN at the weekend.

Ntcham, who was signed in a £4.5million deal from Manchester City two years ago, revealed he had been “really disappointed” a move to Porto had fallen through last summer.

And he added he “would blossom” if he was allowed to return to France with Marseille showing an interest.

The 23-year-old also claimed Scottish football was not challenging enough.

Lennon, preparing for tonight’s Champions League opening qualifier against FK Sarajevo in Bosnia, was far from happy with his player’s badly-timed and controversial remarks.

The Irishman, speaking to Sky Sports News, said: “That will be addressed when Olivier comes back.

“I think it is fair to say that a lot of us, whether it be management, players or people at the club, were not satisfied with the comments. 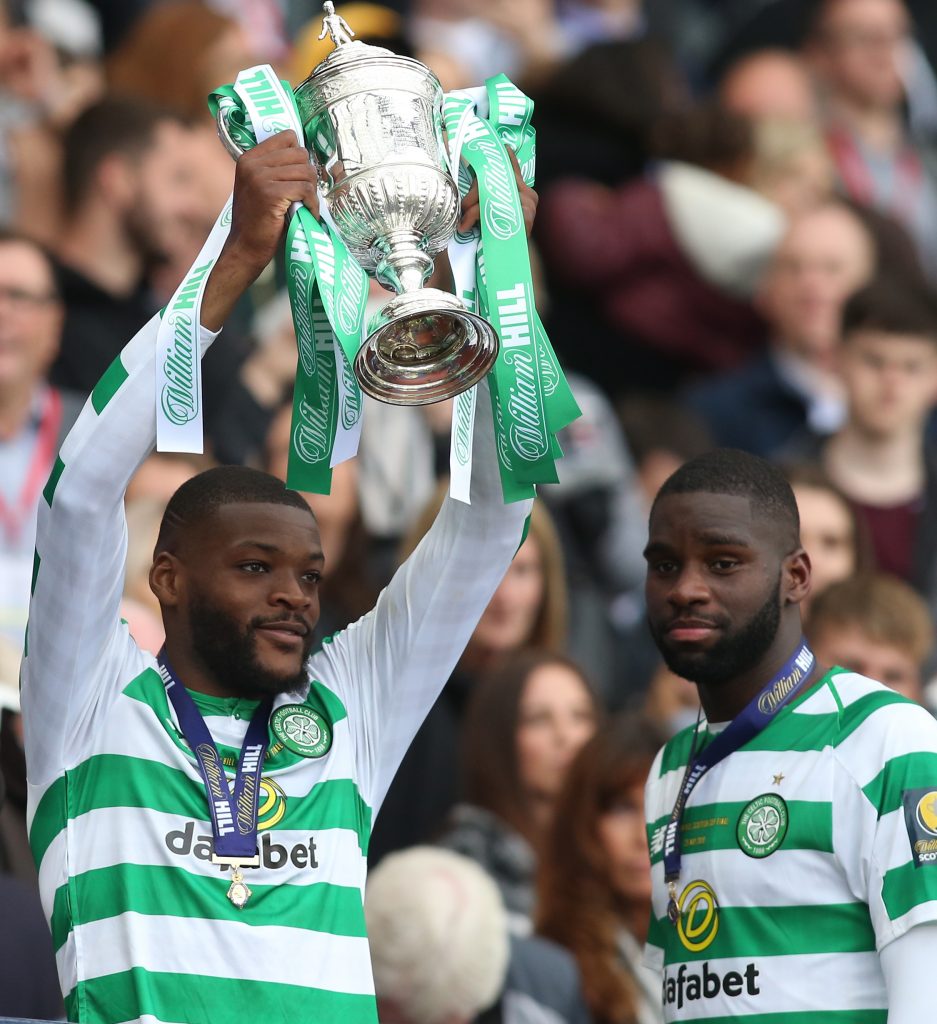 THE FINAL FAREWELL? Olivier Ntcham holds aloft the Scottish Cup with two-goal Odsonne Edouard looking on after the 2-1 win over Hearts.

“When I speak to Olivier it will be done privately, but you can imagine, we find the comments untimely and not particularly accurate.

“He still has a future, he is under contract.

“But I will be speaking to him about his mindset and his attitude toward the club as well which, the way it came across, didn’t look good.”

Ntcham was quoted by respected daily sports journal L’Equipe and his words left the majority of Parkhead followers fuming.

The midfield man made a good first impression at the champions once he settled into his debut campaign following his switch from The Etihad outfit.

However, his form dipped alarmingly last time out after the turn of the year when he returned from injury. He claimed only six goals from 31 appearances, six as substitute, while penning a four-year extension to his contract in October.

Lennon left him out of his starting line-up for the Scottish Cup Final against Hearts although the former Genoa loan signing came on for a tiring Tom Rogic in the second-half of the 2-1 triumph to seal the phenomenal treble treble.

It could be one of Ntcham’s last pieces of silverware at the club if a suitable offer is received during the summer transfer window.