LEIGH GRIFFITHS was delighted to knock in Celtic’s third goal in the 3-1 triumph over Kilmarnock as the champions stretched their lead at the top of the table to 12 points.

Amazingly, it was the Hoops striker’s first strike at Parkhead in over SIX MONTHS!

Griffiths sizzled in a superb effort in the 7-0 Flag Day victory over St Johnstone on August 3 in the east end of Glasgow – and had had to be content with away-day successes at Fir Park (twice), Firhill, Rugby Park and McDiarmid Park before yesterday.

The 29-year-old Scotland international hit a trademark free-kick in the 5-0 romp against Nomme Kalju in the home Champions League qualifier on July 24, but, apart from his effort against the Perth visitors when the title was paraded, it’s been blanks all the way for the fans’ favourite.

However, that came to a halt when he swept in Ryan Christie’s crisp left-wing cross to put a firm conclusion to a free-flowing move that also included Christopher Jullien and Odsonne Edouard, who had earlier claimed his 26th goal of the campaign. 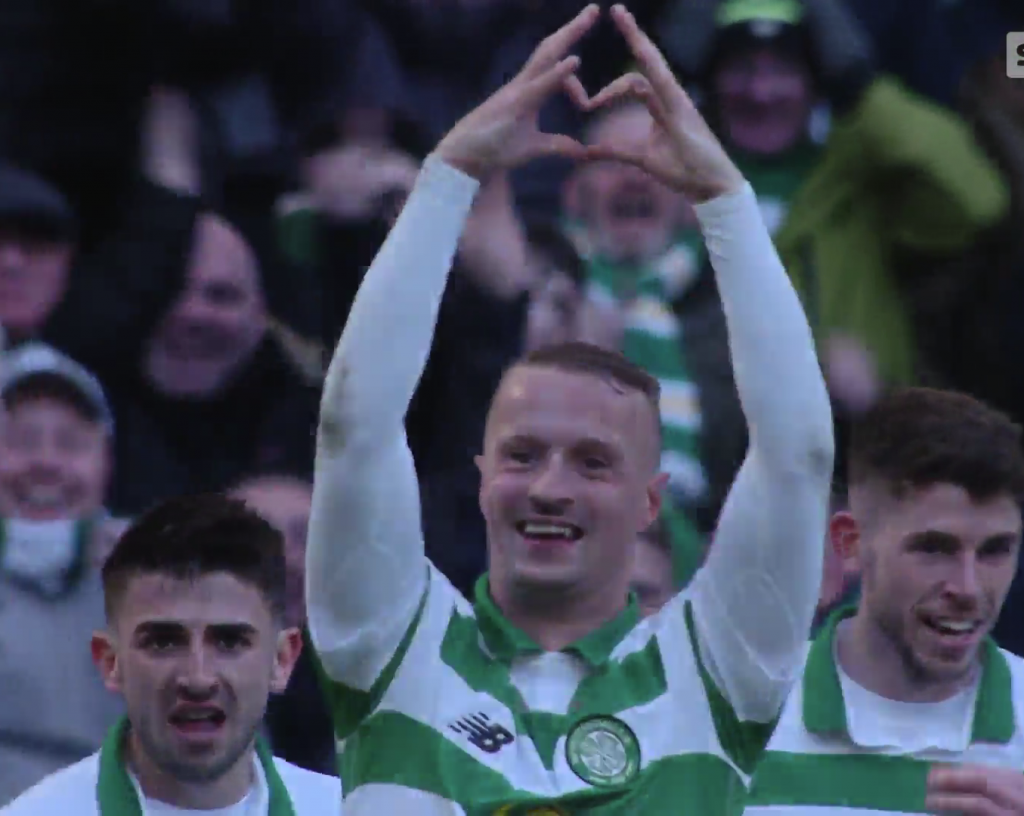 HOME SWEET HOME…Leigh Griffiths celebrates his strike against Kilmarnock with Greg Taylor and Ryan Christie about to add their congratulations.

Griffiths was eager to make up for being forced to sit out the trip to Copenhagen for the 1-1 Europa League draw and told the club website: “I was obviously disappointed to miss Thursday, but it was a precaution more than anything.

“I’m delighted to be back in the starting eleven and contributing to the team and scoring goals. The resilience we showed and the reaction after going one down, we knew we’d get chances and it was about putting them away.

“I’m feeling good. That’s my first goal at home since August, so scoring on this occasion was a relief. I’m happy to contribute in any way I can, but just being back involved at all has been brilliant. Hopefully, that can continue for a long time.”

Fifteen or so minutes into Celtic’s 10th successive domestic victory, news filtered through that Steven Gerrard’s Ibrox side had dropped two points in a 2-2 draw at Perth, but Griffiths insisted: “Results elsewhere had no effect on us at all.

“We go about our business, try and get three points and then worry about other results elsewhere after the game. Thankfully, we scored three goals and we really could have had more. 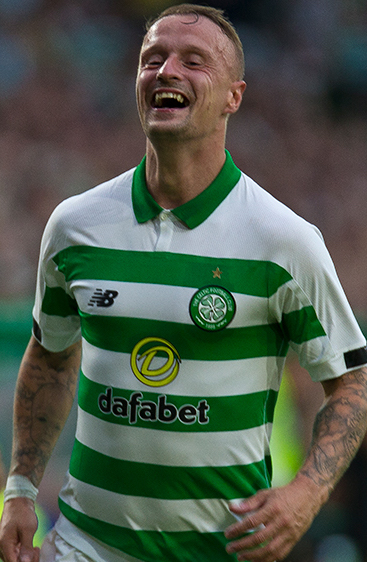 PARADISE…Leigh Griffiths shows his delight after scoring against St Johnstone in August.

“We’ve got a never-say-die attitude in this team, and we just keep going from the first minute to the 90th minute. We’re relentless in everything we do, be it at training or on the pitch – and that’s really starting to show.

“We had Broony, James and Olly all missing, but we’ve got players who can come straight in and put in a good performance. We’ve got great depth in this squad. That’s testament to the manager and all the guys behind the scenes, keeping everyone on their toes and working hard.

“Now, we look to Thursday, when we’ve got a massive chance to qualify for the last 16 of the Europa League.”

Lennon and his troops have the opportunity to achieve a place in the last 16 of European competition for the first time since 2013 when the Danish champions provide the opposition.

DREAM DOZEN AS CELTIC THUNDER ON