THE famous Ronny’s Roar made its debut at Pittodrie on November 9 2014 following a nerve-shredding 2-1 triumph over Aberdeen.

Virgil van Dijk claimed the last-minute winner after skipper Scott Brown had been red-carded. It was a victory that put Celtic on top of the league and saw the Norwegian gaffer, who had replaced Neil Lennon in the summer, spontaneously join in with his players as he saluted the travelling fans.

It was the day Ronny Deila arrived as the Hoops manager.

It hadn’t been easy for the likeable former Stromgodset head coach to make the step up to life in the Parkhead hot seat and he later revealed joining Celtic had been a massive learning curve. 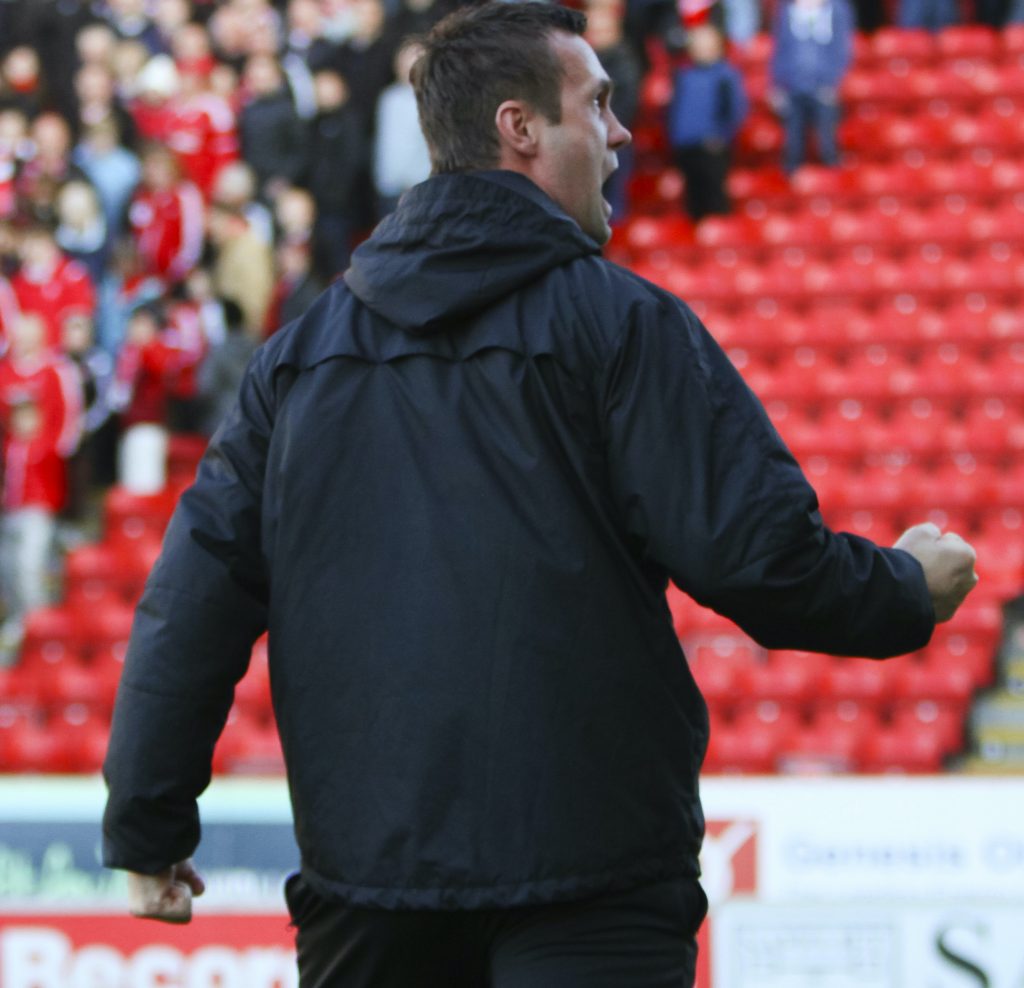 RONNY’S ROAR…Norwegian Ronny Deila celebrates with the fans after a momentous win in the north east.

It began within a month or so of settling in as Lennon’s successor when the constant demands of life at the club were hammered home to him.

Deila inherited regulars such as onfield leader Brown, the majestic Van Dijk, Charlie Mulgrew and his countryman Stefan Johansen, among others. He had to oversee the eventual £10million sale of popular goalkeeper Fraser Forster to Southampton while also selling striker Tony Watt to Standard Liege. He introduced Craig Gordon to the No.1 position after the international had spent two years out of the game through injury.

It was a dramatic period of transition on and off the field and it was reflected in some scorelines, particularly in Europe.

However, Deila displayed some remarkable spirit to continue working on his beliefs and the reward came in the shape of Celtic’s fourth successive SPFL title and the League Cup. He reflected: “The most important thing is that I understand you have to experience things before you can learn.

“And it made it even more concrete to what I believe in – you have to give players and staff and others the opportunity to experience things and then learn from them.

“You are going to make mistakes and do good things, but the best thing is not to make the same mistake twice. You should always keep this process going all the time, always thinking of development.

”It’s so important at a big club like this, with the pressure the players and I are under. Good performances will bring us the results we want.” 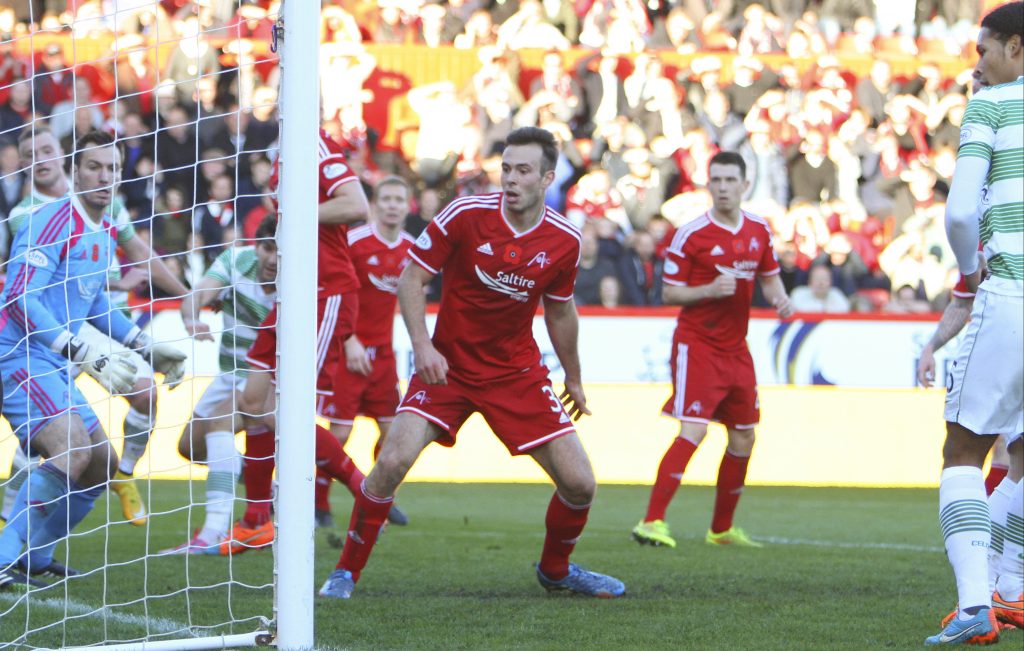 DUTCH TREAT…Virgil van Dijk knocks in the winner against Aberdeen that put Celtic top of the league. 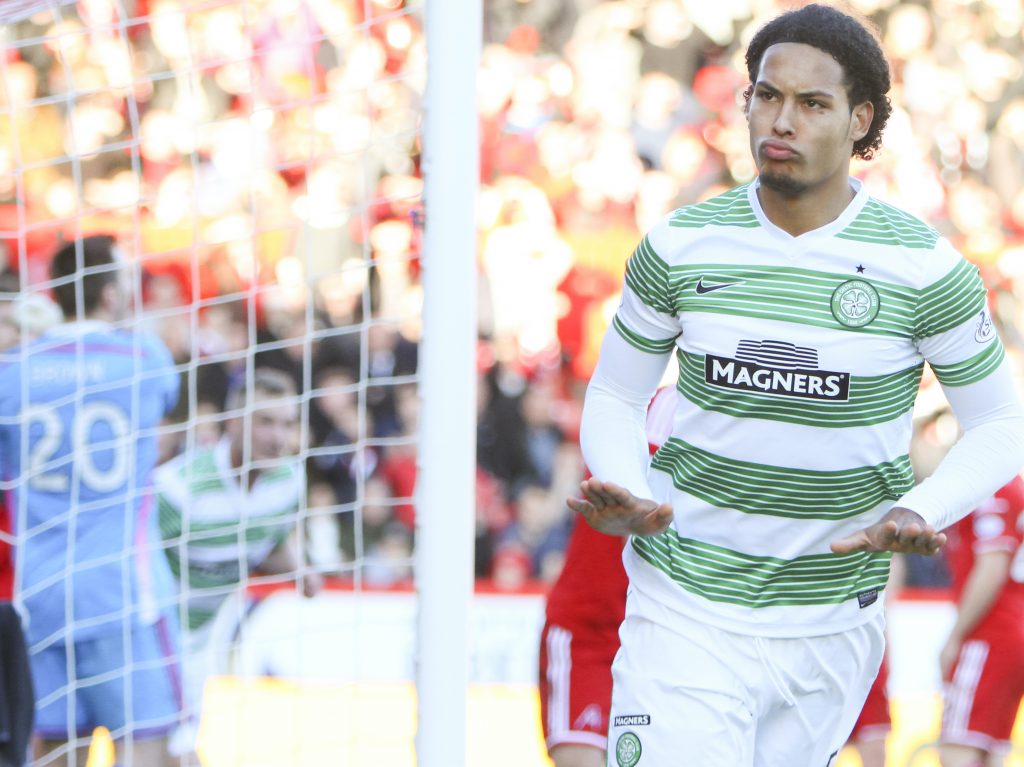 KEEP CALM AND CARRY ON…Virgil van Dijk sends a message to the Celtic support after his last-gasp points-clincher.

The November date in the north east five months after his appointment became a landmark occasion. The victory placed the Hoops into pole position for the first time that season.

The visitors had to achieve the three crucial points the hard way after Adam Rooney had shot the Dons ahead, rifling in from close range after a fumble from Lukasz Zaluska.

Before the interval, Johansen replied with a clever equaliser and, with a crowd of 19,051 in a state of frenzy, neither side looked content to settle for a point. With eight minutes remaining, Brown was dismissed for a second yellow card following a tug on ex-Celt Niall McGinn’s jersey. 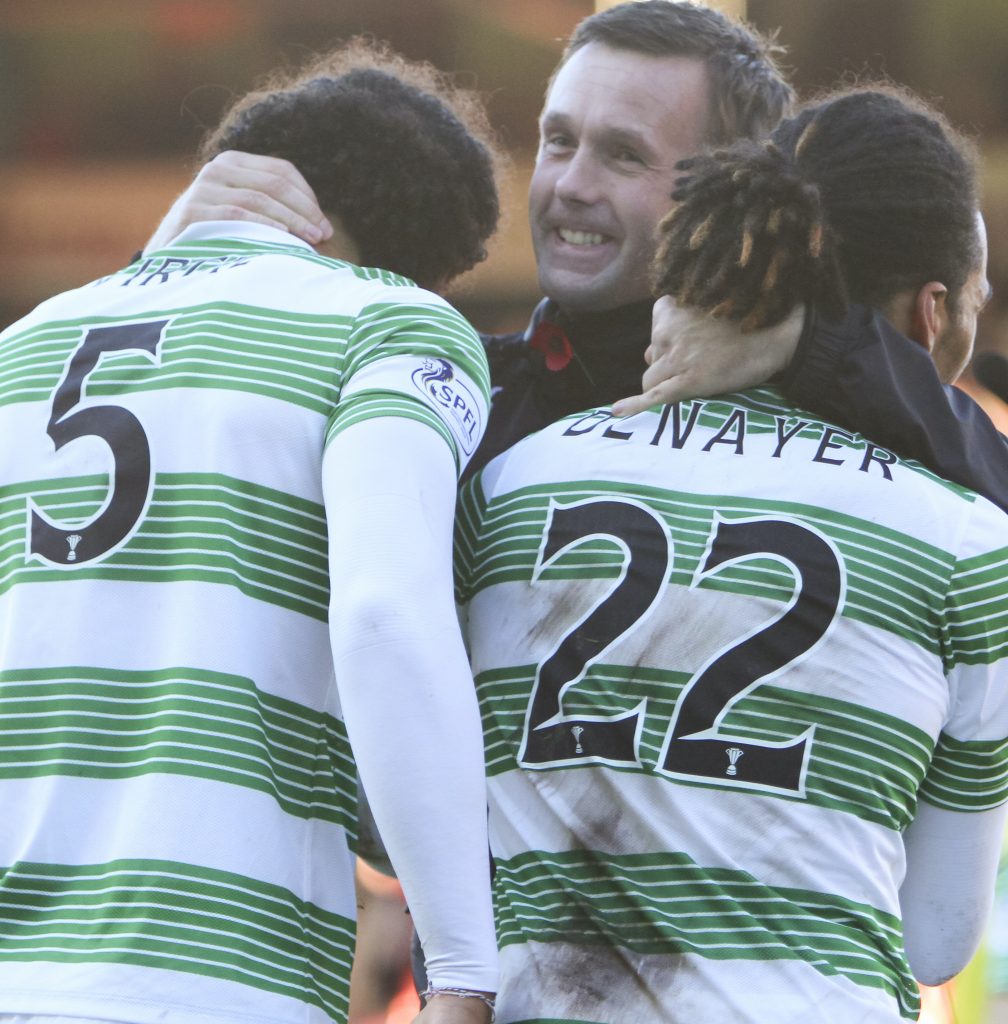 HAPPY DAZE…Ronny Deila celebrates with matchwinner Virgil van Dijk and Jason Denayer after the 2-1 win over the Dons.

That was the signal for Derek McInnes’ men to pile forward in search of the winner. McGinn, in fact, had four reasonable opportunities in the second period, smacking a shot off the base of the post on one occasion and shooting straight at the grateful keeper in stoppage-time.

But it was future Champions League victor Van Dijk who made certain of a well-earned triumph when he knocked the ball in at the far post after a corner-kick delivery from Jonhansen on the right.

The home side were so incensed by the loss that Shay Logan was shown a red card by referee Alan Muir for comments made in the tunnel.

While that fracas was being played out, Ronny Deila was introducing the ecstatic support to Ronny’s Roar that became the Norwegian’s trademark during his two-year reign at Parkhead.