ODSONNE EDOUARD should be allowed to leave Celtic – NOW!

That was the overwhelming vote from CQN readers in our exclusive poll when we asked for YOUR views on the French striker.

Exactly 592 of you cast their vote and a whopping 457 – 77 per cent of the poll – agreed it was time for the champions to sell the striker.

However, 135 – 23 per cent – took a different course and thought Neil Lennon should hold onto the player to see if he can help turn a miserable season around.

CQN would like to make it abundantly clear the poll was not designed to make Edouard a scapegoat. To do so would have been beyond foolish. Simply put, we wanted to learn how the readers were reacting to the player’s form.

It cannot be denied the Frenchman, who will be 23 later this month, was a key component in the club’s historic quest for a tenth successive title. Indeed, in many eyes, he was the main man.

He was at the centre of some intense transfer speculation in the summer, but the Hoops’ hierarchy resisted while fees between £20million and £30million were being bandied about. It was questioned if all the sales talk would affect the player in the new campaign.

Alas, facts indicate that it has.

Obviously, not all of the blame can be laid at the door of the frontman – Celtic have always won and lost as a team – but there has been massive disappointment in his goal return since the start of the season.

Statistics show Edouard has scored seven Premiership goals this season – three of them from penalty-kicks.

Maybe the responsibility was too much for the player. Possibly he couldn’t hope to live up to the hype of the previous two seasons after arriving as the club’s record purchase at £9million from Paris Saint-Germain in June 2018 following an impressive term on loan. 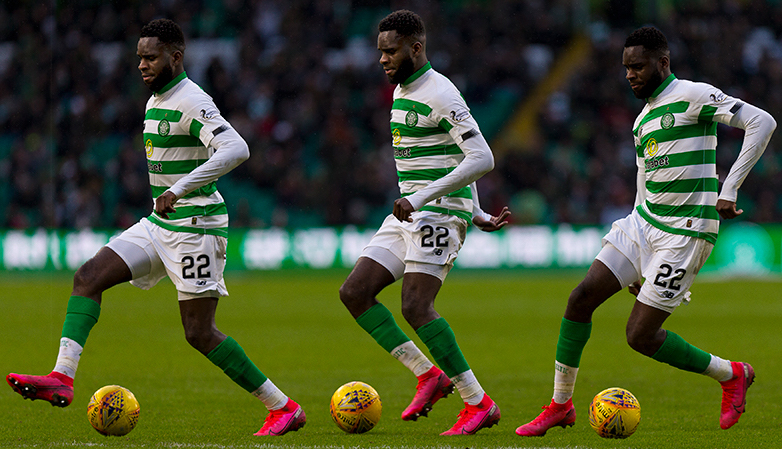 He replaced his fellow-countryman Moussa Dembele who made it clear he wanted out of the club after two years and got his wish when he joined Lyon near the end of that summer’s transfer deadline.

Edouard’s fall from grace has been fairly spectacular and no-one could have predicted what lay ahead for the individual or the team back on Flag Day on August 2 when he rattled in a hat-trick as the Hoops set off on their glory bid with a 5-1 romp against Hamilton Accies.

Nor could anyone have foreseen that his next league goal from open play would come one day before the turn of the year when he lobbed in one in the 3-0 victory over Dundee United at Parkhead – SEVENTEEN games after his third goal against the Lanarkshire outfit.

His previous three top-flight counters have come via the penalty spot against Ross County in the 5-0 rout in Dingwall on September 12, the 2-2 draw with Hibs at Easter Road on November 21 and the 3-0 success against Hamilton Accies at New Douglas Park on Boxing Day.

As CQN pointed out, Edouard claimed 22 goals from 27 league appearances last time out. In total, he notched 28 strikes in all competitions – 29 if you include his penalty-kick in the delayed Scottish Cup Final triumph last month.

The charismatic Frenchman, once idolised by the support, has failed to deliver in a crucial campaign. With seven strikes in 15 league appearances he isn’t even averaging a goal every other game. In all competitions, he has collected 11 goals.

Edouard is under contract until June 2022. There is NO chance he will see that through.

It appears there will not be too many tears shed when he finally leaves and that is as surprising as it is disappointing.

The poll closed at midnight last night and CQN would like to thank all the readers who took the time to register their vote.

We asked: SHOULD EDOUARD BE SOLD NOW?