Celtic Quick News on News Now
You are at:Home»Latest News»SCEPOVIC SIGNS FOR GETAFE
By CQN Magazine on 31st August 2015 Latest News
STRUGGLING Stefan Scepovic’s nightmare spell at Celtic ended tonight with a cut-price £1.5million move to Spanish outfit Getafe. The year long loan deal was completed just ahead of the Spanish transfer window closing and Getafe have a buy clause inserted into the agreement. 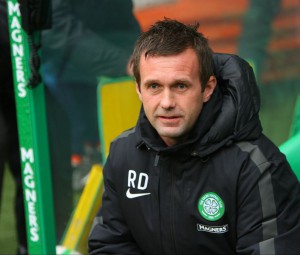 The Serbian striker, bought by Ronny Deila for £2.3million from Sporting Gijon last summer, quit the SPFL champions after scoring only six goals in 25 appearances.
Scepovic’s former side Gijon, Real Valladolid and Israeli outfit Maccabi Tel Aviv were also watching the situation, but Getafe moved quickly to complete the deal for the 25-year-old frontman before the transfer deadline.
Although the beanpole attacker struggled at the Hoops, his stock is still high in Spain where he scored 23 goals in 39 games to attract the attention of Deila.
Scepovic struggled for game time last term and the arrival of Nadir Ciftci from Dundee United for £1.3million in the summer was another setback.
Celtic are also in the market for a striker and it wouldn’t be the biggest surprise ever if Ronny Deila goes back into the Spanish market tomorrow.
—————————————–
*We have a limited number of SIGNED copies of Caesar & The Assassin remaining and these are available at a discounted price. You can order direct from CQN by clicking HERE or by clicking on the photograph below…