IT WAS a spectacular case of deja vu for Brendan Rodgers and Celtic as they made history in season 2017/18 – the first Scottish club to achieve the amazing double treble.

Here the former national newspaper sports editor, veteran of fifteen Celtic books, looks at an another extremely enjoyable period in the club history.

AS the curtain came down on a gilt-edged 2017/18 campaign, Brendan Rodgers acknowledged he had been victorious where no manager had succeeded in the history of the Scottish game.

The Irishman had just seen Celtic coast to a reasonably comfortable 2-0 Scottish Cup Final triumph over Motherwell on May 19 2018 at a cloudless, radiant Hampden Park to collect his sixth domestic trophy in two years. Not even the legendary Jock Stein had managed such a spectacular feat.

The first trophy up for grabs had been the League Cup when Celtic took on Motherwell on a grey and overcast afternoon on November 26 2017 at the national stadium. In the opening forty-five minutes of a tense confrontation, Celtic appeared to have applied the handbrake and had rarely troubled goalkeeper Trevor Carson.

Thankfully, James Forrest supplied the opening goal four minutes after the turnaround and Moussa Dembele added a second shortly afterwards from the penalty spot after Scott Sinclair had been downed by Cedric Kipre who was instantly red-carded.

A smiling Rodgers acclaimed his players afterwards and said: “It’s our fourth trophy in twelve months and it’s a phenomenal achievement. And it’s a huge credit to the players because of their hunger and desire to keep having that belief.” 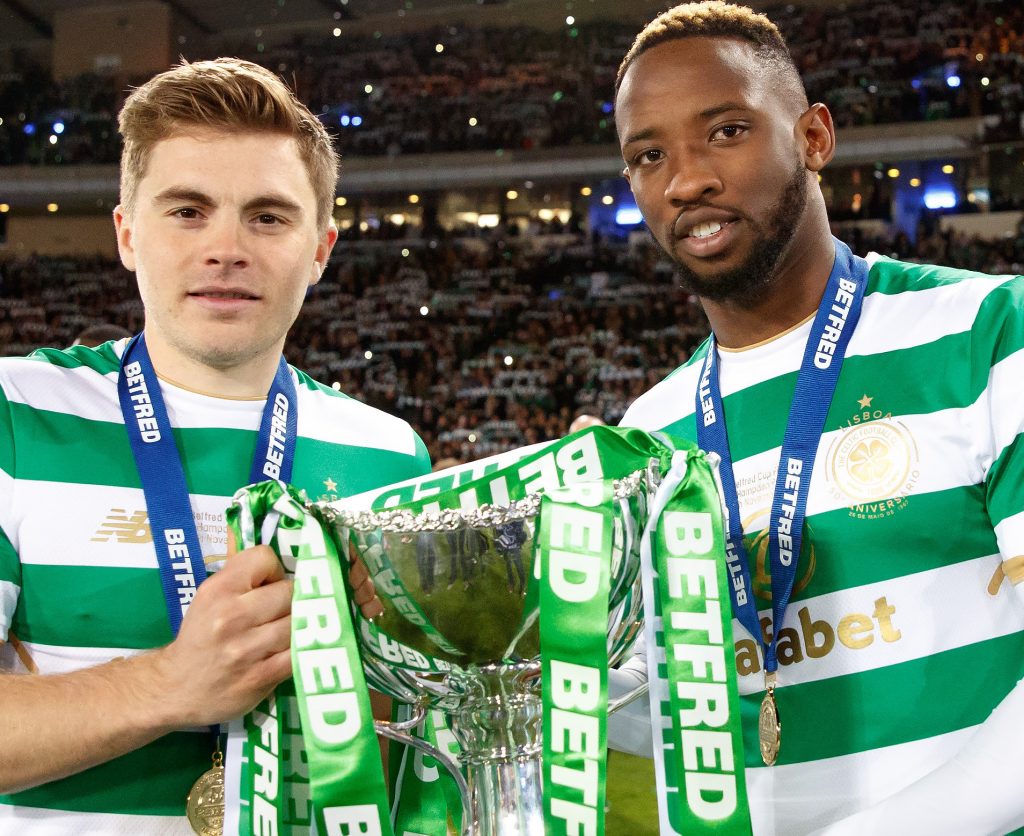 Just eight days before Christmas, Celtic’s astounding unbeaten domestic record came to a halt at the seventieth hurdle when they lost 4-0 to Hearts in Edinburgh. Clearly, it was a horrible result matched by the team’s uncharacteristic sloppy performance. The Tynecastle playing surface became one giant banana skin and error piled up on mistake following blunder until the final whistle was blown. In the previous month, Celtic had beaten St Johnstone 4-0 in Perth to surpass their own one-hundred-year-old British record of sixty-two domestic games without defeat.

Rodgers insisted his crestfallen players take a bow in front of the travelling support and was positive in the aftermatch media conference. “They’ve set a record that may well never be beaten and they can be very proud. We now hit the reset button and look to get three points in our next game. Now that the run is finished, we want to get back to winning ways as quickly as possible.”

Celtic contemptuously dismissed an inadequate Rangers team 4-0 in a lopsided semi-final in April on their way to a Scottish Cup Final meeting with Motherwell the following month. Tom Rogic got the opener, Callum McGregor added the second before the interval and then the French double-act of Moussa Dembele and Olivier Ntcham rolled in two stick-on penalty-kicks to bring the curtain down on two years of unbridled joy against the suffering, outclassed Govan club; eight wins and two draws in ten games. 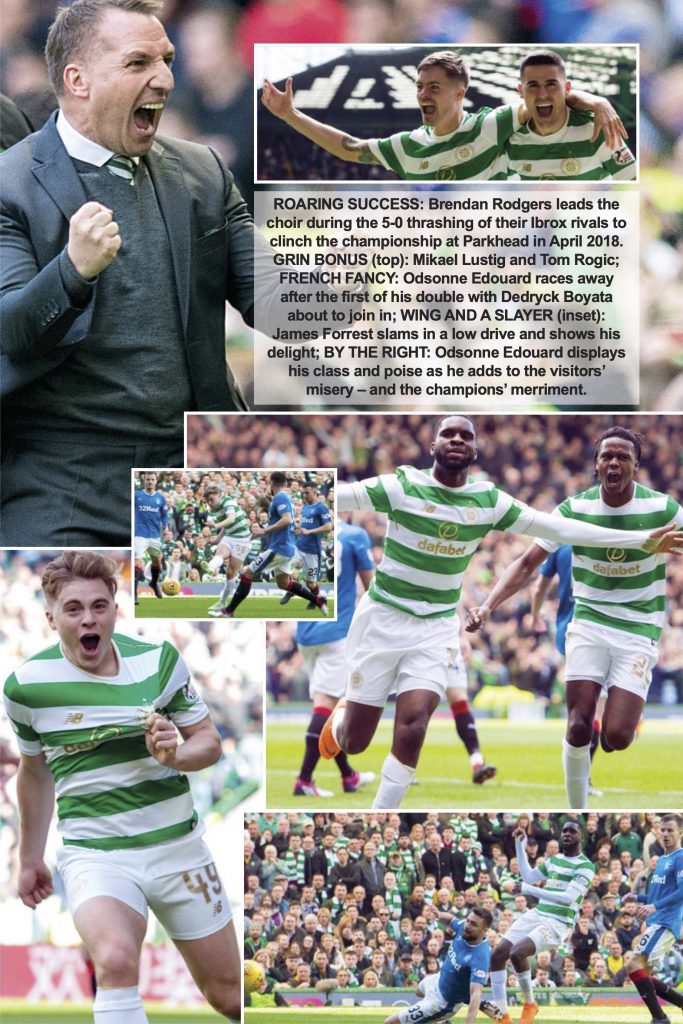 Rodgers’ side raced to a five-goal advantage by the fifty-third minute and it had been the third time the Irishman had seen his side score five goals against the Govan outfit. In truth, as the manager conceded afterwards, Celtic should have scored more than five. Odsonne Edouard skimmed across the perfect playing surface to stick two in the net with James Forrest, claiming his first-ever strike against the Ibrox side, Callum McGregor and, almost inevitably, Tom Rogic joining in.

Rodgers revelled in the team’s seventh successive title triumph – and the forty-ninth in history – and smiled when he had been reminded it had been the first time in thirty-nine years Celtic, then bossed by the legendary Billy McNeill, had clinched the flag against the Ibrox side.

Rodgers acknowledged: “Our basic rules today were very simple. It was to attack with real aggression and intensity, try and recover the ball as quickly as we could whenever we lost it. If we couldn’t do that, make sure we were tight and compact, look to dominate as much of the ball as we could and give it our best shot. And I don’t think I could have asked any more of the players. They were absolutely brilliant and I’m really proud.”

As the green and white ribbons were being attached to the Scottish Cup on a glimmering May 19 afternoon at Hampden, Celtic were going through the fading moments of the Final against Motherwell, two goals ahead following sensational strikes inside the first twenty-five minutes. Callum McGregor and Olivier Ntcham were the marksmen and Rodgers allowed himself a brief moment of satisfaction.

“You could never imagine it could go as well as it has,” commented the manager. “From the first day I walked in to the club, it’s been amazing.”

The Celtic fans could sense treble treble ahead.