At the corner of the Celtic End and the Jungle – who used to enter the ground down in that corner? 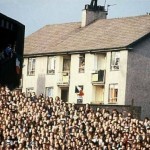 Great memories. Used to queue at the boys gate, great times with my mates. We stood in the queue for the boys gate, and there was a fella in the queue with a moustache, he was told to move out the queue as it was for schoolboys, many times by a steward but he refused. Finally, a big copper came over, he said, “Right you! Get oot the queue, you’re no at school.” The fella with the moustache, said…” Aye am ur, I’m a f***en janitor! (Stephen Reid)

Aye these where the entrance turnstiles of choice then we would head to The Jungle happy days man! (Joe Bone)

Aye. Walk down hamburger alley, turn on to Janefield Street, and funnel along past the houses. Always amazed me that there were so many windows with the same ornate blinds in them. Then queue to get in the turnstiles, nip through the bogs, pop up at the first passage in the jungle and wander down to “our” spot. Happy days. Modern fitba is rubbish. (George Walker)

That is a fantastic picture, brings back so many memories. I remember we used to climb over the dodgy fence at the back of the Celtic End, which would take you inside the ground and unto the toilet roof. Had to do it just as the turnstiles were opening as most of the stewards were otherwise engaged. If the Kellys and the Whites weren’t declaring my money, they weren’t getting my money! (Gus MacInnes)

Used to come in that entrance all the time after walking down Janefield street, once inside we had to make a dash before they closed off the way in to the Jungle, remember particularly well the league clincher v Dundee in ’88, I never made it in on time and ended up in the Celtic end, still a fantastic day though and probably the largest crowd I’ve ever seen at Celtic Park, fans everywhere. (Chris Dalton)

Used to enter just at the side of the old Celtic end. Got lifted over in my younger days. You used to able to walk to any part of the ground once you were in. (Alan Crawford)

I did early to mid seventies (Brian Gallacher)

Remember it well, used to be able to walk from one end to the other. (Toddy McCormack)

I used to get a lift over at that corner and ma auld man used to stand there and put me doon the front, and we used to sit on the track and a big polis used to come round and tell ye to get back inside the barrier! Used to get “ra macaroon and spearmint Chewin guuum!” Happy days!! (Tony G Dempsey)

Us Bhoys from the Roy Milne Celtic Supporters Club from Alloa and the surrounding area always came in at that corner for a while. HH (John Donnelly)

Aye…went out as a bhoy on the old mans shoulders …happy days. (Drew Lochhead)

Great times there as a kid getting a lift over then onto the jungle. (Thomas Mcgowan)

I remember the tree folk used to climb to watch the games dont know if it was before or after this pic. (Michael Farquhar)

Remember leaving it on the night the police charge down it….scary stuff…(Craig Arnott)

Yip just next to the river of Pish! (Scott Mason)

Me. When’s the picture from? I don’t remember it being as open as that, but again my memory ain’t that good now. (Jim McBride)

Those were the days. (Peter Smith)

Used to very often leave from it though I usually met my mates at gate 11 in the Rangers end then walk into the jungle. Then out at that end if we were kicking into the Celtic end 2nd half. (Jim Payne)

What a brilliant picture! I’m probably in it somewhere! (Craig Torrance)

I used 2 come in there on ma way 2 the Jungle. (Mark Mckenna)

Remember not being able to see many games in the Jungle, but the atmosphere was electric, didn’t need to see! (Gary Priestley)

Wow, remember a wee boy going to the jungle and used to get pushed through the turnstile thing as the adults paid. Once a tim always a tim. (Gary Fraser)

Remember it well! Didn’t Ian Ferguson’s mum live in one of the flats? (Christopher Connelly)

I think they stayed in the square on Janefield Street on the graveyard side. (Gus MacInnes)

Yip loved those days, over the wall, under the turnstyles the crowds where massive those days sometimes on a euro night i wid jump the turnstyle and you had to be quick as the door would shut quickly at the other end, but i was always quick me.lol…hail hail . (John McGregor)