Celtic Quick News on News Now
You are at:Home»Match Report»CELTIC’S SCORELESS STUMBLE – BEFORE THE STRIDE INTO HISTORY
By CQN Magazine on 9th May 2018 Match Report

IT was another blankey-blank performance from the champions as they worked their way towards the champagne celebrations on Sunday.

Kilmarnock did what everyone expected them to do and defended in depth right from the kick-off and strangled the life out of the game.

The dull and boring tactics have earned the Ayrshire outfit points this season, but it’s not easy on the eye and they would struggle to get on the card for marks out of 10 for entertainment.

It’s a brand of non-football that is alien to the champions who dominated proceedings, but couldn’t transfer possession into points.

Celtic were allowed a lot of the ball in their own half while Killie waited to snap into action. Right from the start, it was obvious the visitors were not in the east end of Glasgow to add to the enjoyment value for the customers.

There was a fair percentage of passing without sustained penetration by the champions in the opening 30 minutes or so as both teams sized each other up.

The Hoops offered a hint of menace when Kristoffer Ajer shoved a ball into the tracks of James Forrest, playing in a more central role, but, unfortunately, he failed to gather it in his stride and the chance was lost.

It was obvious Brendan Rodgers’ side were missing the ferocious firepower of Moussa Dembele, Leigh Griffiths and Odsonne Edouard, all sitting this one out for a variety of reasons. Which team wouldn’t miss that awesome goal threat?

There was no targetman for the midfielders to hit and the Hoops were bringing the ball forward in a series of passes with a slower build-up suiting the visitors. 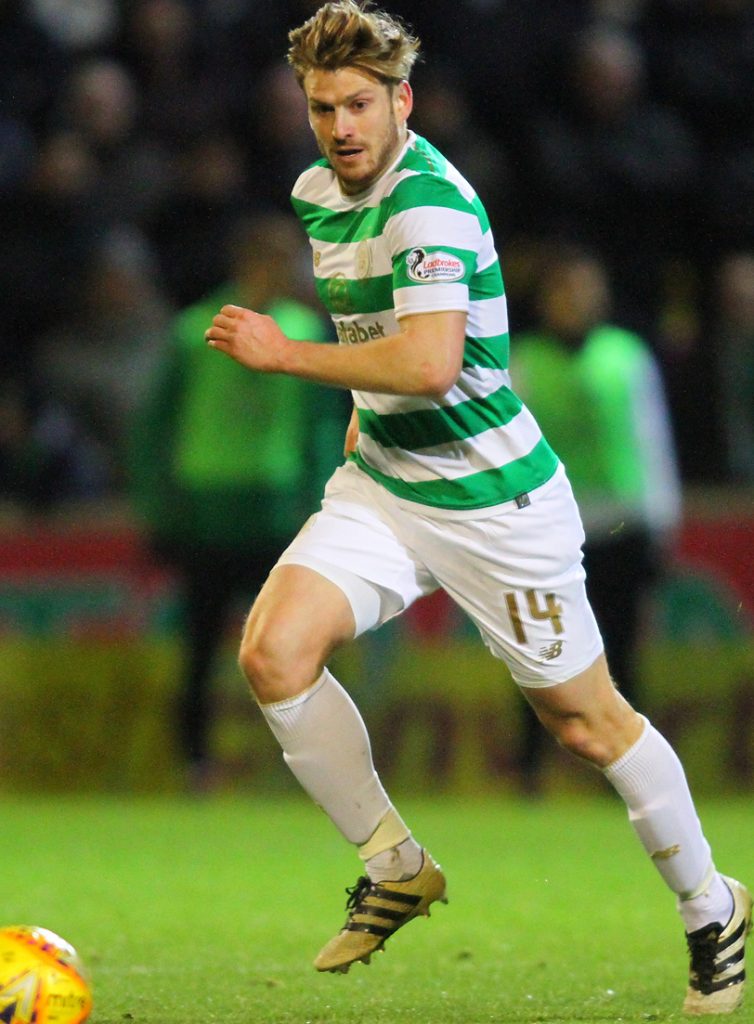 COMEBACK BHOY…Stuart Armstrong worked hard before he was taken off after the hour mark.

Comeback Bhoy Jozo Simunovic thought he had broken the barrier when he connected with a Stuart Armstrong left-wing free-kick to send a header wide of the sprawling keeper in the 33rd minute. However, the defender’s joy was cut short by referee John Beaton who blew up for an infringement.

It appeared Ajer got the final touch, but was just a shade offside.

Simunovic had been out of luck earlier, too, when Jack Hendry knocked on another left-wing deadball effort from Armstrong, but he just missed at the far post.

The Rugby Park outfit soaked up the pressure as the green-and-white parade rolled relentlessly towards Jamie MacDonald, but Steve Clarke’s side worked hard to absorb the menace.

Forrest swooped swiftly to get his head to a left-wing cross, but his elevation was just off and the ball zipped over the crossbar.

Scott Sinclair came within inches of the opener when he made an excellently-timed run into the box on the blindside as he siezed onto a cute pass from Armstrong, who was revelling in a rare start in recent weeks.

The Englishman, who scored the Hoops’ decisive third goal against Hearts at the weekend, took the ball in his stride before chipping a delicate left-foot effort over the outrushing MacDonald.

It looked certain to be heading for the back of the net, but the ball slipped just wide of the far upright as the Killie defence breathed a huge sigh of relief.

Patrick Roberts, who had rarely been sighted, flashed into the action as the interval edged closer with a some nice control and a whiplash drive from outside of the box. But MacDonald wasn’t overly-worried as the ball carried over the bar.

Scott Bain, playing instead of Craig Gordon with Rodgers refusing to risk his No.1 keeper ahead of the Scottish Cup Final against Motherwell a week on Saturday, had an easy opening 45 minutes with very little to do with the Ayrshire side playing their usual cagey tactics. The second-half was just as tedious.

Three minutes after the break, Armstrong was given a fabulous opportunity when Sinclair, after some clever footwork to drift away from a couple of defenders, stabbed the ball into his path, but the midfielder’s rapid shot was blocked by MacDonald.

Youssouf Mulumbu, who scored the only goal of the game when the teams met at Rugby Park earlier in the campaign, was never far from the side of Scott Brown as the action unfolded.

Killie regularly strung eight defenders across their penalty box when the Hoops came forward in an effort to suffocate their opponents. 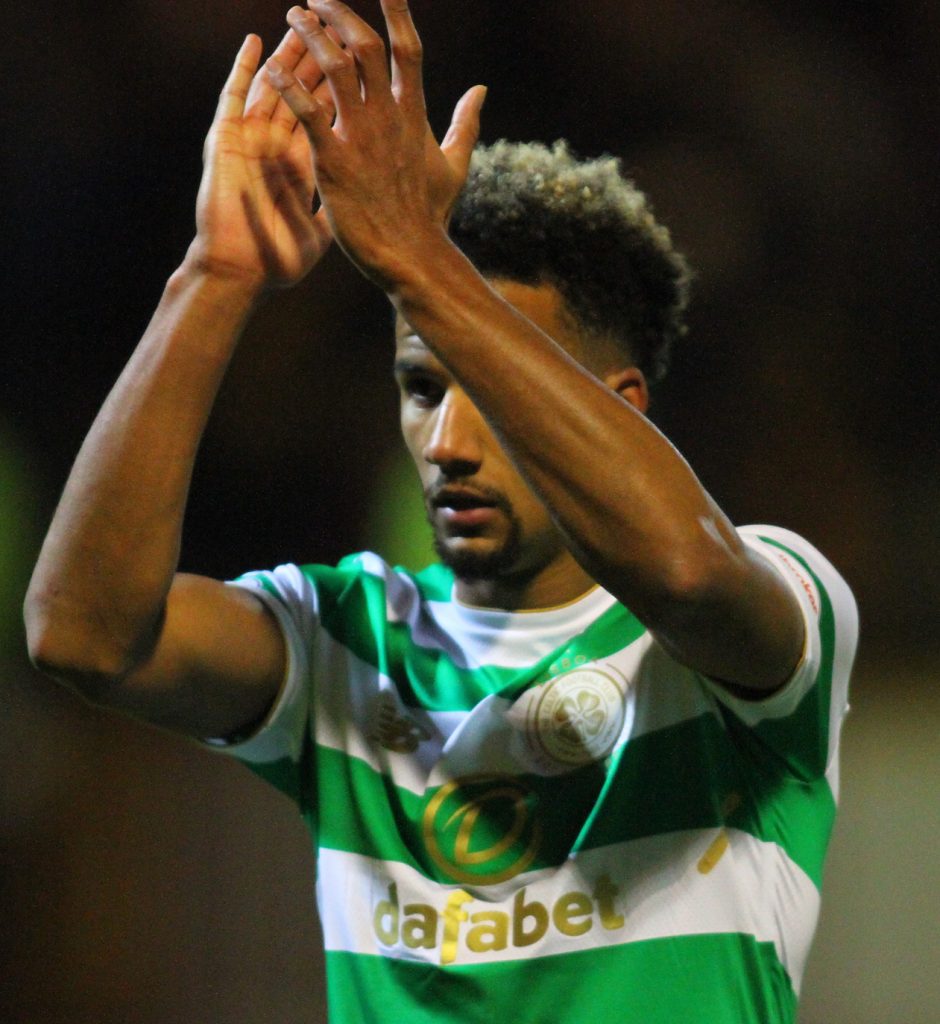 A BIG HAND…for Scott Sinclair who often threatened with this darting raids on the left.

And, as can so often happen on these occasions, the hosts got a fright when Aaron Tshibola sneaked in ahead of Hendry to get a foot to a low right-wing cross, but he lifted his effort over the bar from smack in front of goal. It was an escape for the seven-in-a-row title winners,

In the 66th minute, Rodgers revamped the line-up with the double substitution of Kieran Tierney and Tom Rogic for Miller and Armstrong.

Eleven minutes later, Clarke threw on top scorer Kris Boyd for Eamonn Brophy as they tried to snatch something from a negative display.

Sinclair attempted to drive Celtic forward with runs down the left, but, frustratingly, he faced two opponents at all times and was being forced wide by sheer weight of numbers while Killie packed the penalty area.

The encounter petered out to a scoreless stalemate, but Killie’s yawn-inspiring brand of football is devastatingly dull and will kill football.

However, the party can start in earnest on Sunday when Aberdeen come to town and then it’s onto to Hampden for the final curtain call against Motherwell with an unprecedented double treble up for grabs.

This was just the stumble before the stride into the history books.