BRENDAN RODGERS has revealed his summer recruitment drive is well underway as he looks to strengthen the seven-in-a-row champions.

Celtic have already opened talks with Paris Saint-Germain regarding a permanent move for striker Odsonne Edouard, whose season has cruelly been hit by a confirmed hamstring tear.

As the Hoops boss put it, unless there is a “miraculous” recovery, it looks as though the popular 20-year-old French ace has no chance of playing in the Scottish Cup Final against Motherwell a week on Saturday, as CQN reported on Monday.

However, Rodgers has also admitted there are other moves to bolster his squad as they line up a third consecutive assault on the Champions League group stages.

Regarding Edouard, he said: “Peter Lawwell has met with PSG and talks are ongoing, so I’m hoping we can come to an agreement.

“I know the boy is happy and PSG have enjoyed watching him develop here. It would be great if we could get this one done.

“He’s struggling to play again this season. We hoped that it was maybe a cramp, but it’s looking worse than that so it’s highly unlikely that he’ll feature again.”

And, while he would like to add Edouard to the side on a permanent deal, there are others who are expected to join him. 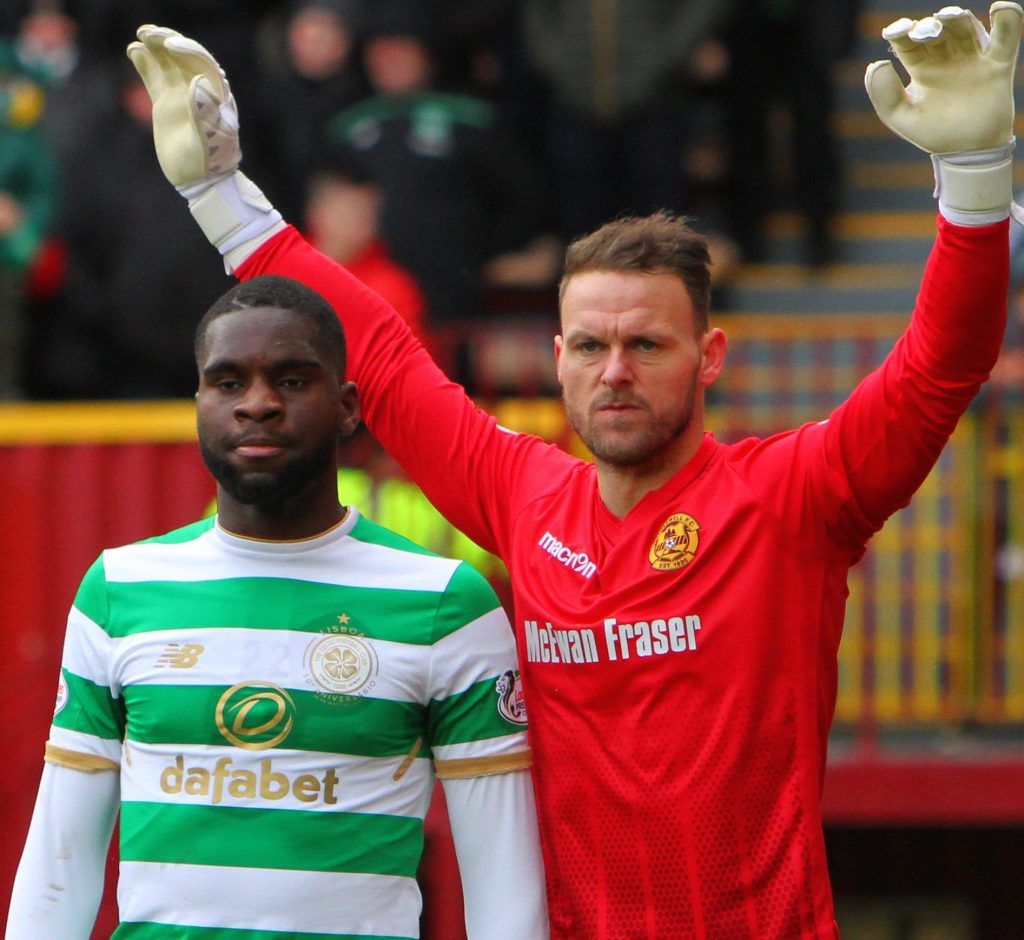 HANDS UP…if you’re playing in the Cup Final. Motherwell keeper Trevor Carson will be at Hampden, but unless there is a “miraculous” recovery, Odsonne Edouard will miss out. Pic: Geo.

Rodgers said: “We’re conscious that at times Celtic will sell players, but we’re trying to keep the core group of players because there’s a lot of work’s gone into that in the last couple of years.

“We’ve been trying to create an identity. The players will have been loving this success. Of course, there will be one or two who may look at other needs, which you can understand.

“But going forward, we want to keep improving. It’s a difficult market, it’s good to bring in players who are going to be better than we have. But that’s big, big money.

“However, we have to find that way to do that and that’s something we’ll look to do and work’s been ongoing for a while.”

The Irishman, with league games against Kilmarnock tonight and Aberdeen on Sunday before the Cup Final, will be wary of taking any risks with Leigh Griffiths and Moussa Dembele.

The Scotland international frontman, still on 98 strikes for the club, was hospitalised with tonsillitis last week, but should be fine for Sunday’s game against the Dons.

Rodgers added: “We’ve got the possibilities to do a number of things. Leigh will be back in training after tonight’s game.

“Moussa’s great. Obviously, you’ve got to think between now and the Final. But we’ve got other options, like James Forrest can play up there as he did in the Champions League qualifiers. Patrick Roberts has played up there for a few games.”

And Scott Sinclair, who scored his first goal in 17 games in the 3-1 victory over Hearts on Sunday, is another option for the Hoops gaffer.