Celtic Quick News on News Now
You are at:Home»Latest News»GRIFF: NO GUARANTEES
By CQN Magazine on 9th April 2021 Latest News

LEIGH GRIFFITHS has been told there are no guarantees as his Celtic career reaches the crossroads.

The striker, who will be 31 in August, fears being released at the end of the season if the Hoops do not trigger a 12-month option on his contract, as CQN reported yesterday.

Interim manager John Kennedy expects the frontman, who has netted 122 goals in his seven years at Parkhead, to attempt to complete a disappointing campaign all guns blazing in an effort to remain at the club.

Griffiths has scored only one goal this year – and seven in total – as the team has suffered a wretched period in which the quest for the tenth successive title was obliterated early on after a series of inexplicable results.

The forward needs game time in the remaining Premiership and Scottish Cup outings, but Kennedy has admitted he doesn’t know if he will be given that opportunity.

The stand-in gaffer said: “It’s very short term for me and that means it’s all about the next game against Livingston.

“I can’t be overly-sentimental, either, because I need to make the right decisions for the team. 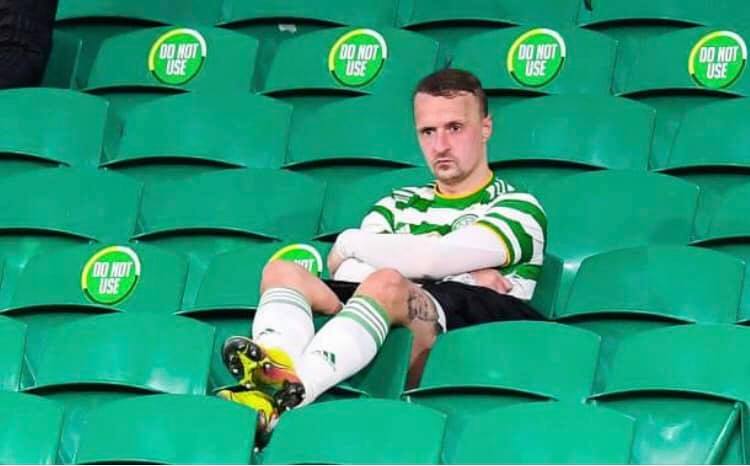 “If we’re going to win at Ibrox next week and have a Scottish Cup run then it’s about the rhythm and consistency of the team.

“So, I never make any promises to individual players, not even Scott Brown or Callum McGregor. All we’ll do is be fair in terms of how they perform at training and in matches.

“If there’s an opportunity for Leigh Griffiths along the way, then perfect. He always gets himself into goalscoring positions, which has been a trait of his.

“Leigh is probably a bit rusty because he has been restricted in his game time, but his attitude has been great.

“He’s been training regularly, which is good, so we have to keep working with him and see what materialises.”

Asked if he would keep Griff if the decision was down to him, Kennedy, speaking to the Scottish Sun, answered: “It’s a hypothetical question.

“It’s difficult for me to address that at this moment because I don’t want to say something when it’s not my call.

“When the time comes, if I’m asked my opinion, I’ll give it.

“But, for Leigh, it should remain private until a decision is made.

“It depends on the timing of when the club decides to make its move. And what the manager decides to do. If I’m part of that decision, then so be it.

“Right now it’s very short term regarding the decisions I’ll be involved in and what I need to prepare for.

“It’s purely preparing for the Livingston game then it’s on to Rangers and we will see what happens after that.

“When the time comes to address Leigh’s situation, if I’m still in the position I am, I’ll be part of that discussion.

“But again, I don’t want to jump ahead of things and get involved in areas that might not concern me.”

Griffiths was hauled off just after the hour mark in last weekend’s 3-0 Scottish Cup win over Falkirk at Parkhead after fluffing a couple of reasonable chances in the goalless first-half. He made way for Albian Ajeti and looked utterly dejected figure as he took his place in the stand.

Kennedy, however, his attitude has been good. He added: “Leigh’s someone who has not had a huge amount of game time.

“There are several of our squad who have had difficult seasons in terms of performances. That comes with the situation we found ourselves in.

“Falling behind in the league brings a lot of pressure and scrutiny.

“What I’ve found in my time here is that it’s guys who have been around the club a long time tend to be the first targets. They are more well known, people have seen them for a long period of time and look to say they have not been good enough.

“In terms of Griffiths and how he’s been training this season, there have been no problems.

“Game time has been hard to come by for one reason or another, but all he can do is continue to work hard and see what happens in the next six weeks.

“He is being calm, he’s trained well and there are no issues there.

“He is focusing on his football and will deal with the next step when the time is right.”