When asked about the Scottish Government’s incredible action, which gave Newco a competitive advantage over Celtic and Aberdeen, Neil Lennon said, “I can’t comment on what the Rangers (sic.) boys did. What I can comment on is the reaction from the Government, which I find bewildering.

“Considering the way they treated us after the Bolingoli incident. There seems to be double standards at the minute as far as we’re concerned.

On discovering Boli Bolingoli broke Covid rules, Celtic isolated the player, disciplined and transfer listed him.  He has not been near Celtic Park in the three months since.  At a time when the virus was at its lowest, Nicola Sturgeon switched into Daughter of Ayrshire mode and grandstanded on Bolingoli’s transgression, banning Celtic (and Aberdeen, for players visiting a pub) from playing football for two weeks.

On discovering two of their players broke Covid rules, Newco isolated and disciplined both.  Sturgeon was silent, instead a Scottish Government spokesperson issued a statement offering Newco their support.  Despite prevalence of the virus being much higher, this incident did not register with this Government.

I have a friend who often refers to the ‘Everyone’s against us’, siege mentality, they try so hard to foster at Ibrox.  Giving people something to fight against brings the best out of them, especially if they are ‘privileged footballers’.

Neil Lennon needs to use this two-faced Government action.  Let the players know they are up against a Government who could not wait to cause fixture congestion to them, while allowing Newco to play on. None of this remotely surprises me, this is a glimpse into how things will be, Scotland. 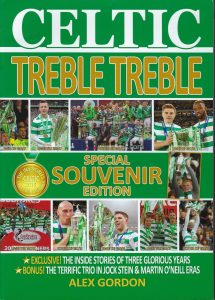 Today we are releasing Celtic: Treble Treble, a 100 page full colour booklet on how the Invincible, Double and Treble Trebles were won, by Alex Gordon.  There are lots of memories you will enjoy reliving.  We have a stock of them available at £5 (retail £9.95).  Fill your boots.